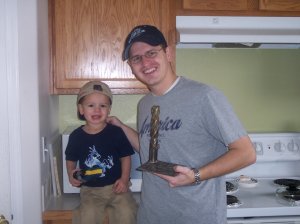 For those of you thinking that Cameron is too young for scouts, you’re right. For an activity the elder’s quorum did a pinewood derby. Richard made his car at the last minute, with limited materials and I did a hurried job of painting it. It was pretty ugly to say the least. He took Cameron with him to the activity and the car didn’t weigh much so Richard had to improvise. 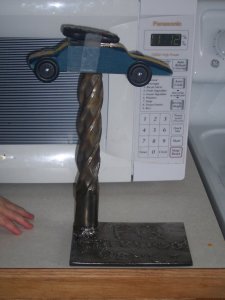 As he was leaving I jokingly said, “Hey, maybe it will win!” And surprisingly it did. This is the trophy. Richard said the best part was just watching Cameron. He loved the big race track and watching the cars crash as they shot off the end.