For those of you who don’t know, Richard has been traveling quite a bit the last 9 months or so. It’s a long story how it came to be, but he’s been mostly in Lewiston Idaho and a few weeks in Seattle here and there. Well I finally got to go with him and I was spoiled! This was part of the hotel ‘suite’ we stayed in the first night. (Turned out we were in the wrong room but we sure enjoyed it while we could and our room the other two nights was also very nice.) On Monday night his manager took us to dinner at a really nice place called The Metropolitan. I think the meal cost more than my monthly grocery bill, but it was delicious. The best part of all of this? KPMG payed for it all. I won’t go so far as to say that my three days in Seattle made up for 17 weeks of travel, but it really was great.

This is at Pike Place Market, the vintage “fish-throwing” image of Seattle.

This was the best cupcake I ever had, called the Royal Raspberry. The little shop makes only cupcakes, and they do it well. Apparently they have quite the reputation. 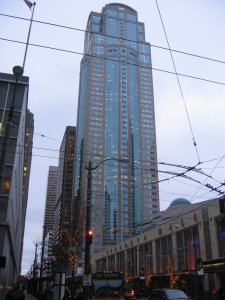 I love visiting big cities. There are a lot of things about big cities that would make it hard to live in; traffic, homelessness and crime etc. But there are a lot of things I like. I like watching all the different kinds of people. I like how much they love their sports teams and perfect strangers can always have something to talk about…”Pitchers and catchers report on Thursday!” I also like all the opportunities to visit museums and attend cultural events. There were so many things I thought Cameron would love to see/do also.

Here is my touring companion Brittany, my new sister-in-law. Although she is probably considered a local because she and my brother live outside the city.

2 thoughts on “EVEN MORE SEATTLE!”