I am avoiding organized sports for my children as long as possible.  I am not ready to make the time committment.  But since I want Cameron to be involved in “extra-curricular” activities of some sort I thought for awhile about what he might enjoy that wouldn’t involve weeknight practices and Saturday games.

Cameron loves to run.  Perhaps I am one of those delusional parents who has convinced myself that my child loves something just because I want him to.  Nevertheless I am convinced he loves to run.  When I was pregnant I would go walking with a friend and would allow Cameron the choice between riding his bike or jogging along (to keep up with us). He most often chose the jogging.  When he was three we went on what was supposed to be a three mile hike that, due to poor map reading on my part, was closer to five miles.  He had rests but walked or ran most of the way.

So a few weeks ago I signed him up for a children’s one mile fun run.  I told him about his “race” and each day he asked how many days until the race.  We did a few practice runs here and there but nothing close to a mile.  I warned him it would be long but he was up for it.   Our only hesitation was that he had his heart set on winning.  We worried that when he saw all the older kids take off ahead of him he would give up.

Saturday was the race and we woke up to snow on the ground and gusty winds.  His excitement did not wane.   Neither Richard or I were dressed to run with him (I didn’t know that was an option) so he ran with some friends from our ward.   As soon as the gunshot sounded he took off with a look of pure determination.  He wasn’t the youngest there, but pretty close to the smallest.

Our friend told us he ran the entire time.  When the finish line was in view he broke into a sprint.  It was so great.   I told Cameron that after the race we could go out for a treat and he requested a milkshake. So my parents came along and bought him a giant milkshake. (Others of us were more in the mood for something a little warmer…) 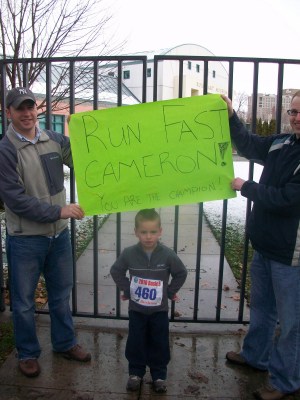 When his Uncle James heard about the race he promised to come with a big sign for Cameron.

I know that not winning was good for him.  (This kid has no shortage of self-confidence.)  Before the race Richard had tried to explain that since this was his first race and the big kids would probably be faster it would be good practice for more races down the road when he would be bigger and faster.  On the way home he said to Richard
“That was a good practice race Dad.  When is the next race?”

7 thoughts on “the big race”