Warning: This post was an exercise for me in finding synonyms for “feces.”  That may be all you need to know to discontinue reading.

On Monday night, we went to my in-laws to watch the lamest NCAA football championship ever.  (For an entertaining commentary on that, go here.)  During the game we encountered some digestive trouble with Miriam.  She was complaining of a sore bum so I changed her diaper to discover a nightmare of a bowel movement.  Sure enough she had a wicked diaper rash from the undetected foul diaper going unchanged for too long.  The problem was that the stool had no smell.  It went undetected because, validate me here parents, for the most part I only change a stinky diaper when my nose makes me aware that I ought to do so.

Some time went by and poor Miriam continued to complain of her tender tush.  There was once again no stench and so I assumed she was just suffering from the existing rash.  At last I checked and realized she needed to be changed again.  I lathered her up with butt paste and sent her on her way, but I was so confused.  Where the heck was all this poop coming from?

Shortly after the second full dump, and not long before the third I received the following text from my mother.  She had been caring for the kids while I was at work that day.

“Miriam got into your dad’s candy so she might get diarrhea from the maltodextrin.”

I couldn’t contain my laughter.

Apparently while my mom was watching Simon in one room she heard Eli shout from another room down the hall.

Naturally she responded quickly only to discover Miriam had enjoyed the better part of a sugar-free chocolate bar my mom had bought my diabetic father for Christmas.  I guess maltodextrin is an ingredient used in sugar-free treats and I guess eating too much can cause some belly trouble.

(I considered researching this more, but who wants to spend their precious minutes learning about causes of odorless diarrhea?)

Fortunately aside from the diaper rash Miriam had no other symptoms or issues. 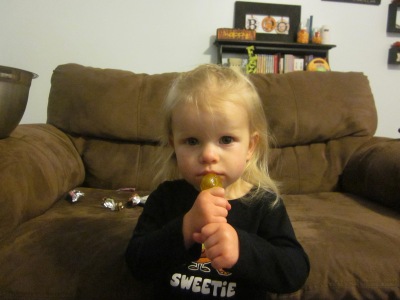 The girl just has a nose for chocolate.  At one point during the game when she was nowhere to be found, I discovered her diving into a bag of M&M’s she’d found in my mother-in-law’s office.

5 thoughts on “well that explains so much”