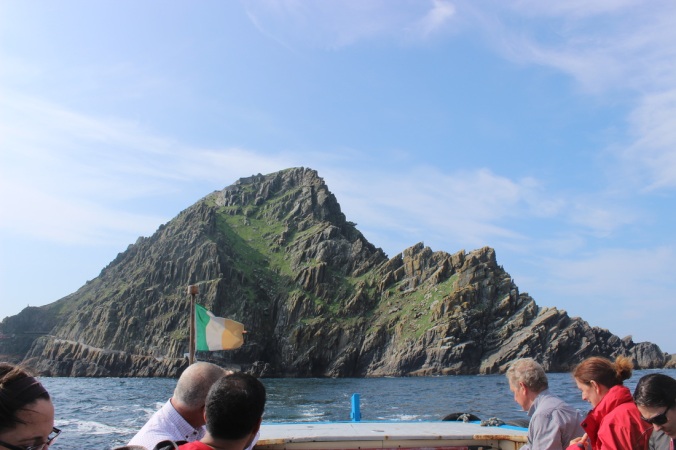 I wish I’d taken a picture without everyone’s heads in it, but the rock of the boat made it hard to get a picture at all.
When I was doing research about what to see and do on the Western coast of Ireland I came across the Skellig Michael.  It is a UNESCO World Heritage site and the reviews insisted that it was worth the effort to see.  It required jumping through hoops a little bit- there are a handfull of boats that go out to the island each day, and if they are full you are out of luck so I had to book in advance.  The boats only go out to the island if the ocean is right, there is only one small “pier” to unload and if the swells are too big then you can’t get off the boat, so everyone made sure to hedge their bet about whether or not we would actually get to go.  The night before we were required to call in and then again on the morning of to confirm that the boat would be going.

It was a long drive (back along the Ring of Kerry) from our B&B to the port so we left early.  If you aren’t there on time, they go without you.  We made it, but just barely, and we boarded the boat with 10 other people.  There was another married couple sitting across from us that we struck up conversation with and spent some of our time with them.  They were both doctors from the Midwest United States and they were really nice and fun to talk to about all the funny quirks we’ve discovered in Ireland and the UK.

Of we go- into the wild blue yonder… 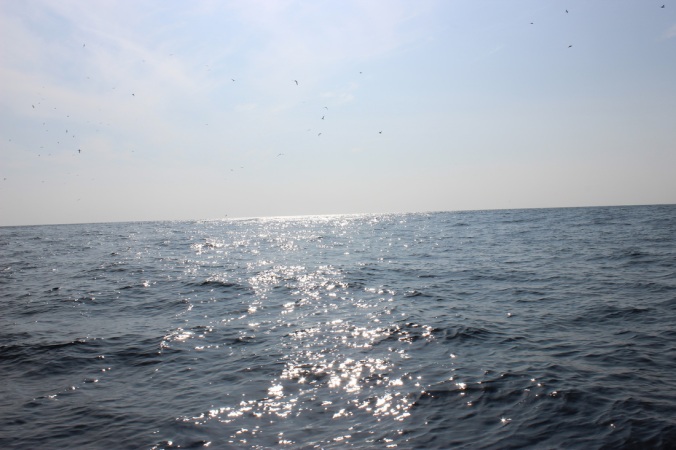 Richard and I, and our other American friends, had a good laugh about the difference between a trip like this in Europe and a trip like this back home.  If we had been in the United States we would have had to sign a waiver, watch a 20 minute video about safety, and we would have been required to wear life jackets.  As it was, there was no waiver, no safety video or speech (just some shouts and orders from the tanned man at the helm) and only a small placard that indicated that there were life jackets, somewhere on the boat.

Our boat was definitely the slow boat, although I’m not sure why. I think maybe it was just older and our “captain” was in no hurry.  The trip out was long, it took nearly two hours and I found myself getting bored and restless.

There is this game I play with the kids when they are bored or tired or restless, I probably learned it at yoga or something.  It usually happens when we are walking somewhere and they get tired of walking.  But I just ask them to tell me what they are seeing, smelling, tasting, feeling, etc.  It helps distract them and keep them present.  I decided to play this game in my head to entertain myself.  It was a really serene experience and I want to write it down, as best as I can recall.

I can’t smell much at all, aside from clear fresh air, until we go past the little Skellig where the stench of bird waste is foul and heavy.

This is the little skellig. You can’t really see the birds, but all that white stuff? Yep. Bird waste. There are 50,000 birds that nest on that island during the summer months. CUHRAYZEEE. 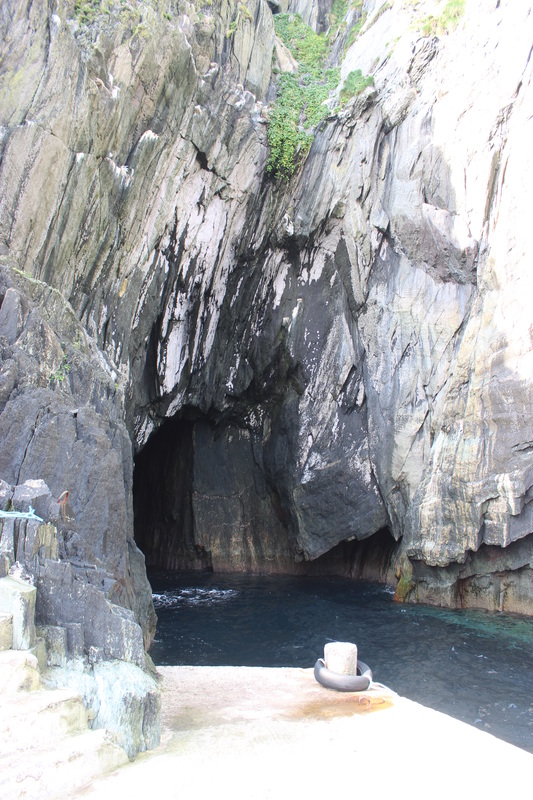 This is the dock, you can see the sea is calm on this day, lucky for us, because he was able to just dock the boat, shout at us all to get off as fast as possible, and then he was gone again.
Okay- so, what exactly is Skellig Michael?  “The Skelligs” is the name given to the two rocky islands, the Little Skellig is the bird sanctuary and the Great Skellig is the site of the remains of an early Christian monastery.  It was dedicated to Saint Michael around 950AD and has since been called Skellig Michael.

There are two peaks on Great Skellig, and the lower peak is the site of the monastery.  It was built between 600-800AD and the monks built three staircases to the top.  The staircases were all built with the rocks I’ve been mentioning so often, and the staircase we took to get to the monastery has something like 613 steps.  There is now a lighthouse on the island so they have since built a road that goes around the periphery of the island at sea level, but the stairs were the only way up.  And it should be noted that people have been killed falling off these staircases.  Fortunately it was a dry day when we were there and the stairs were not slippery. 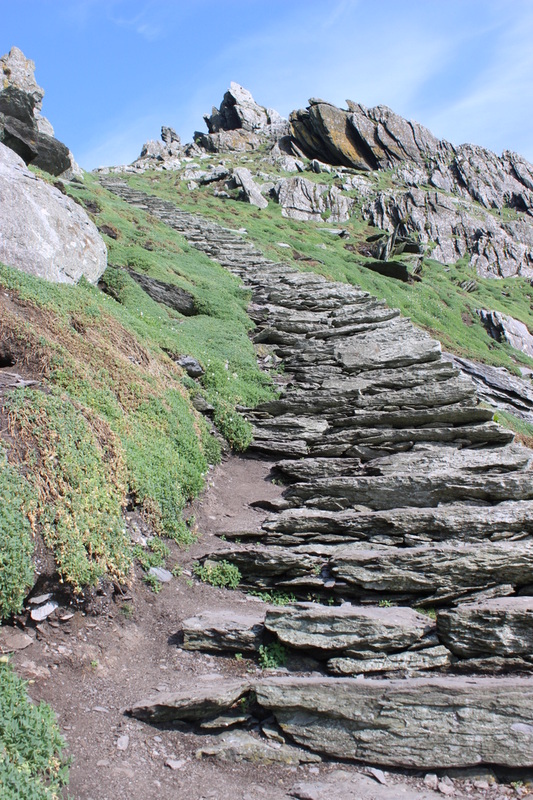 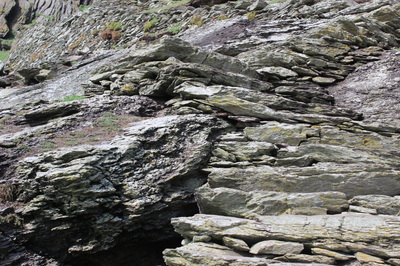 Does it go without saying that these staircases are an epic undertaking of engineering and man-power? Well I’ll just say it.  These staircases were so rad.   Although- not so rad to climb.  But thankfully there were beautiful views every time we stopped for a rest. 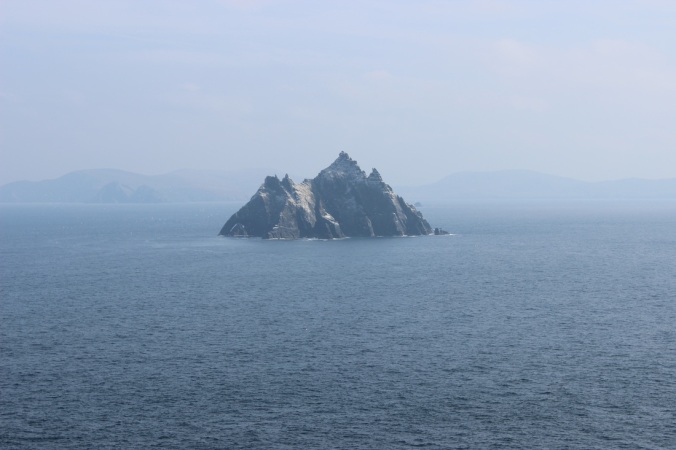 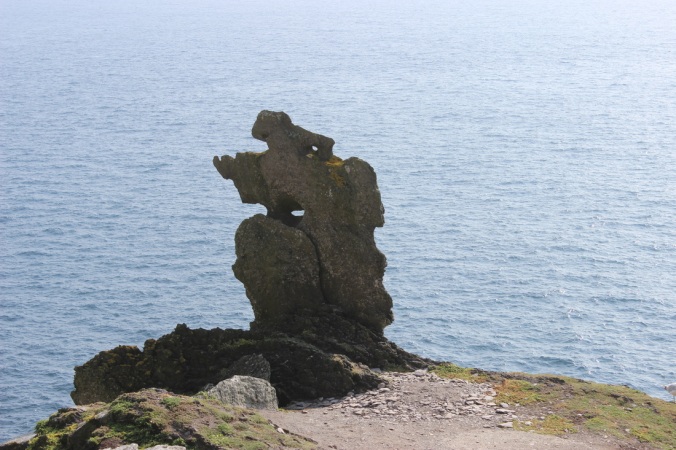 The entire experience reminded me of Machu Picchu and Wayna Picchu in Peru.  Ancient remains at the top of a treacherous mountain…

The monastery itself is quite impressive.  It is believed that no more than a dozen monks lived there at any given time.  They lived simply off birds, eggs and probably a small vegetable garden.  They had cisterns to collect rain water and there are six beehive huts and two oratories. 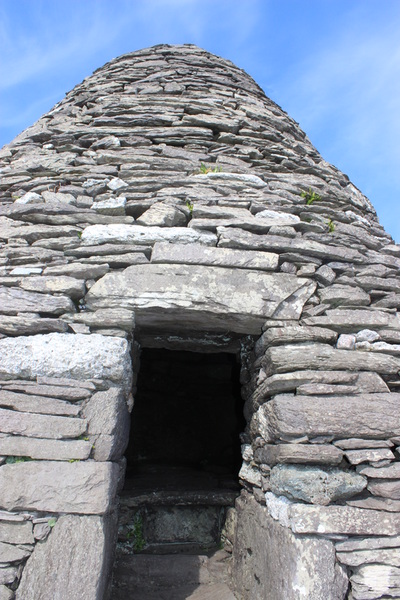 I had to prove I was really there…

Coming down was physically less exhausting, but mentally more exhausting.  You had everything BELOW you.  I’m not really afraid of heights but I do have four children that I’d be leaving behind…

There is a small valley, called Christ’s Saddle, between the two peaks, and after we got back down to that valley we ventured across to the other peak.  At the top of the higher peak is said to be a flat rock slab where pilgrims would come to make penance.  Richard and I ventured part of the way up the peak, but the stairs were really narrow and steep and so we thought better of it.  One of the park wardens said she had seen someone crawl out on that rocky slab and it made her heart race.

The view from the lower peak just beneath the monastery, across the little valley over to the higher peak. You can see the guy in red, that is our American friend coming down from his attempt to ascend to the pilgrimage rock. (He didn’t make it either.)

Richard taking the first set of mini-steps up toward the pilgrimage rock. We joked that you must have committed some serious sins to feel compelled to go beyond here. 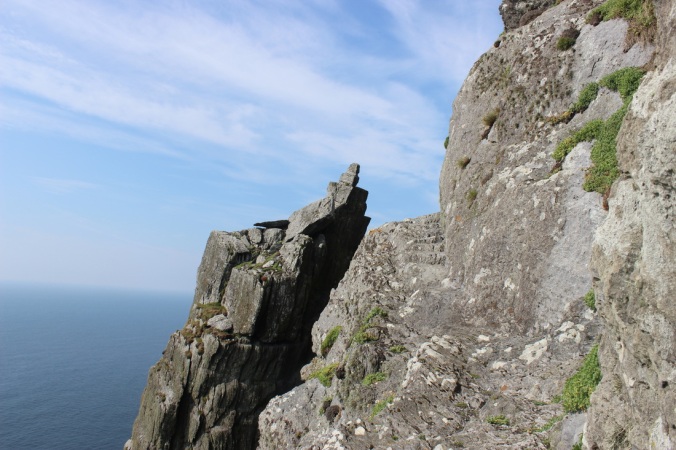 This is the second set of steps where we decided to proceed no further. The rock bulges out making it impossible to see what’s around the bend. Alright, I’ll just own it. We were too chicken. 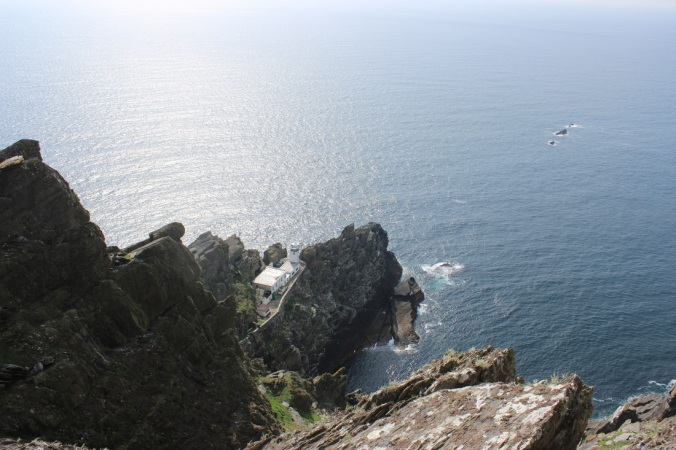 The view from the point at which I turned around and went back down. You can see the lighthouse down on the south side of the island.

A view of the staircase from the other side of the valley. (The higher peak.)

Oh Jo. You’re such a jokester.

This shot from the boat kind of gives a little perspective to how high the monestary was. You can make out the outer wall just below the word I typed. (I don’t know how to draw an arrow.)

Some seals enjoying the sunshine. We also saw a dolphin jumping in the ocean, but I didn’t get a picture.
We only spent about two hours on the island, which was okay because there were no restrooms on the island.  We worked our way back down to the pier to catch our boat back.  It took just as long to get back to the mainland as it did to get out to the island, but the time went much faster because we talked to our American friends the whole way.

It was a remarkable thing to see and I felt so grateful that it worked out for us.  It was kind of last minute and we were at the mercy of the weather so it was lucky indeed.

One thought on “Ireland – Skellig Michael”