So we roused and dressed the kids, packed ourselves like mules and walked to the train station.  From there we rode into the city, made a quick transfer on the tube, and then came up above ground again at London St. Pancras International Railway Station, where the Eurostar departs for Paris.  We arrived in time thankfully, but without much to spare.

The Eurostar blows my mind.  The route is directly from London to Paris via a massive tunnel beneath the English Channel. It travels at 186 mph, making the journey only two hours.   We ate breakfast on the train and arrived at Gare du Nord at 10:30AM. 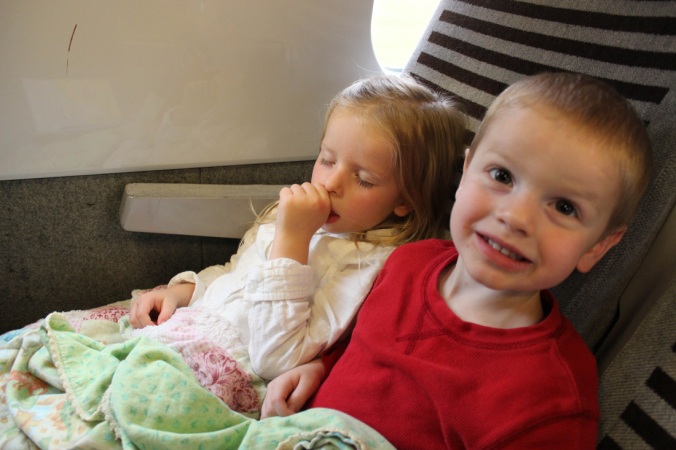 Miriam is just pretending to be asleep.
Per the suggestion of Tanya I asked Richard if we could get a taxi to the hotel to drop off our luggage, but being the ever frugal husband that he is, we opted for public transport.  I really don’t mind public transport, except when you’re in a country where none of your traveling party is fluent in the language, you have all your luggage, and you have four children who woke up really early, and you don’t know your way around at all.  I think by the time we arrived at the hotel I had Richard convinced a taxi might be a nice idea next time…

We left our baggage at the hotel and decided to find a place to eat.  We chose a cafe close by and did our best to order in spite of not understanding the menu at all.  But we had our first French baguette, which Mim devoured, and I think we were all pleased with our food.

Then we decided to just walk toward the Eiffel Tower. 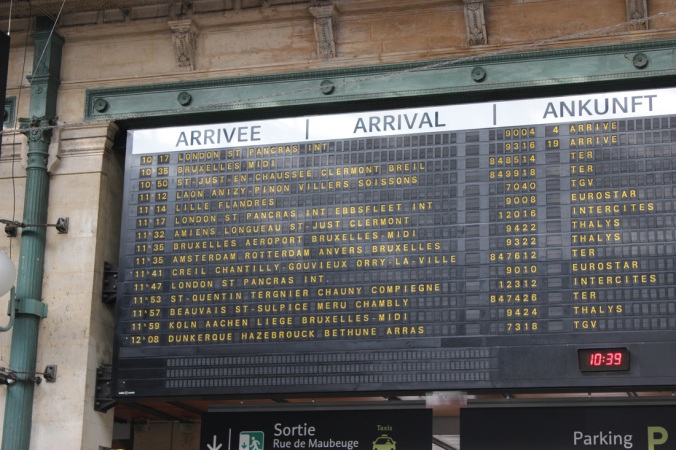 This was an old school train schedule board at Gare du Nord, where the letters would tick through the entire alphabet and then stop at the right letter. It’s hard to explain but it was so fun to watch!

London has its lovely places, but I thought all in all Paris is just a prettier city.

The buildings are all white stone, or light stone, and it just feels so clean. It helped that it was a really gorgeous day. The weather was really phenomenal our entire holiday in France. 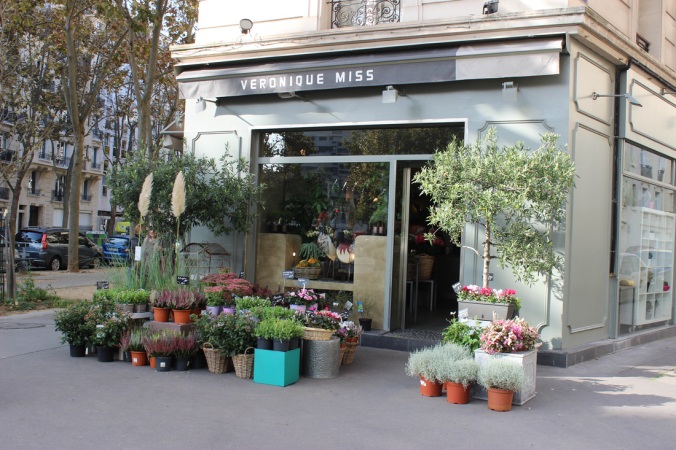 My kids love gargoyles and stone faces. So do I. 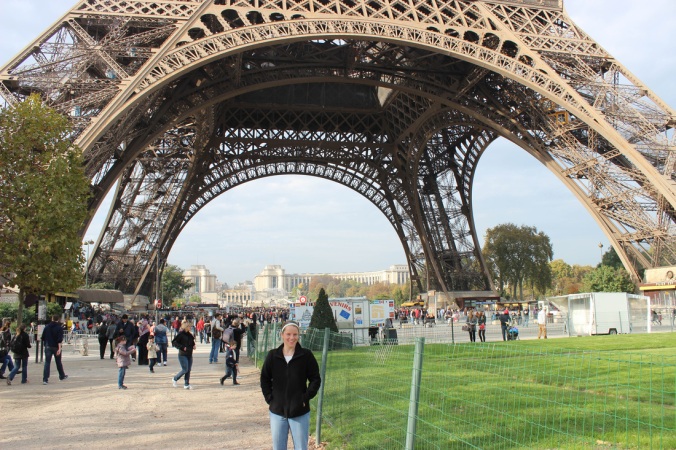 This picture is mostly just to offer some perspective about the size of Eiffel Tower compared to itty bitty humans.

The kids found a park so Gordon and Julie offered to sit for a minute and keep an eye on them and Richard and I walked closer to the Eiffel Tower.  We had tried to book tickets online in advance to take a lift to the top, but it was all booked and we had heard that the lines were awful so we weren’t expecting to be able to do that.  But as we walked around beneath it, I told Richard I would get in line and he could go back and get his parents and the kids.  When they met back up with me we would see how far I had progressed in the line.  Our plan worked out really well, the met up with me right as I was going through security.

Everything in Paris was bigger than I expected.  The Eiffel Tower was so huge.  Notre Dame was monumental.  The Arc de Triomphe was massive.  And the Louvre was like an entire city.  More on those later but standing beneath the Eiffel Tower I was just so amazed that something so tall could have been built so long ago.

Waiting to get on the lift…

The Seine from the first viewing deck. 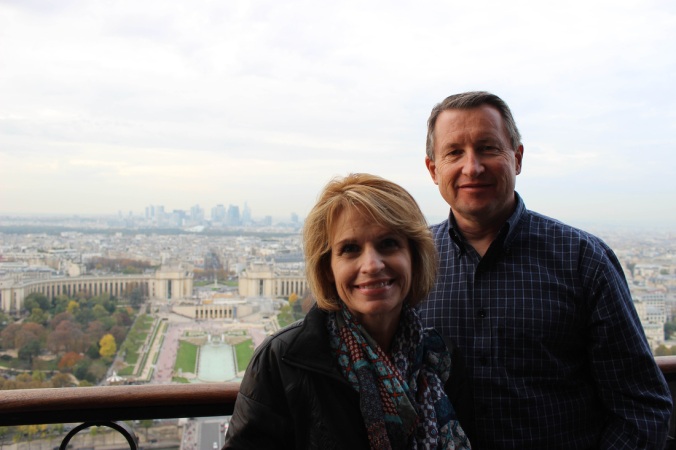 Gordon and Julie on the first viewing deck. 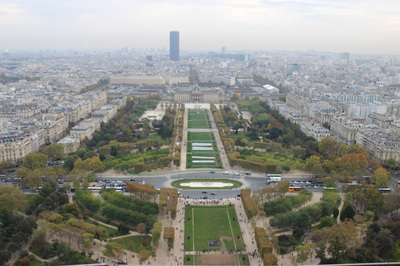 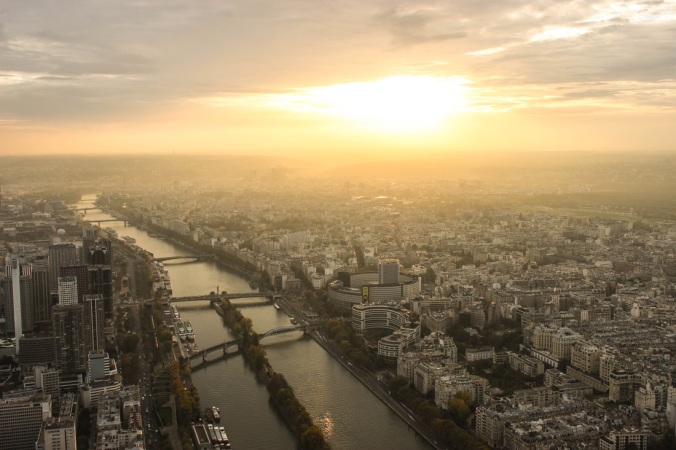 It was impossible to really capture the magical-ness of the sparkly lights on camera. They only twinkle for a few minutes every hour, on the hour.

Cameron standing at 280 METERS, you can see in the little diagram where on the tower that is. SO high!
After we came down from the tower it was nearly dark and the kids were exhausted and hungry.  We got them some crepes and then loaded everyone up in a taxi and went back to the hotel.  Gordon and Julie offered to stay with the kids so Richard and I could go out to dinner and see more of the city.

We found a nice place to eat and both tried something new- I wish I’d written down what we ate but of course I can’t remember because it was in French.  But let’s just say the French do four things really well; cheese, bread, potatoes and meat.  And dessert.  What I mean to say is that the French really have mastered the art of cooking.

After dinner we went back to the Eiffel Tower to watch it sparkle at night.  It was so pretty.  So surreal.

As usual, with kids it’s hard to ever see and do as much in a day as one might like to in a place like Paris.  But the fact that we consumed baguettes and crepes and went to the top of the EIffel Tower was enough to feel like a success for me.