The Imperial War Museum
The school year here somewhat resembles a year-round schedule.  There are three terms, with two weeks of holiday between terms, six weeks in the summer, and then one week holiday breaks at each half-term.  We were visiting Paris during the kids first half-term break last October, so I had grand plans for what we would do since we would be in town for this half-term. Then we had a leak and workmen came to repair it and we had to stay home Wednesday through Friday.  But Tuesday (which happened to be my birthday) we were able to go to the Imperial War Museum.

Racing down the sidewalk. Poor Simon, shortest legs and he got stuck with the backpack…
It wasn’t a particularly warm day, but it was sunshine and blue sky, which was lovely.  We walked to the bus stop and were lucky to catch the bus we needed and rode it all the way to the museum.  One thing I love about the location of our house is that it’s really close to several different bus routes, which means that more often than not we can take just one bus to our destination rather than having to ride a bus to one place, and then switch to a different bus.  In fact, many times we have more than one option. 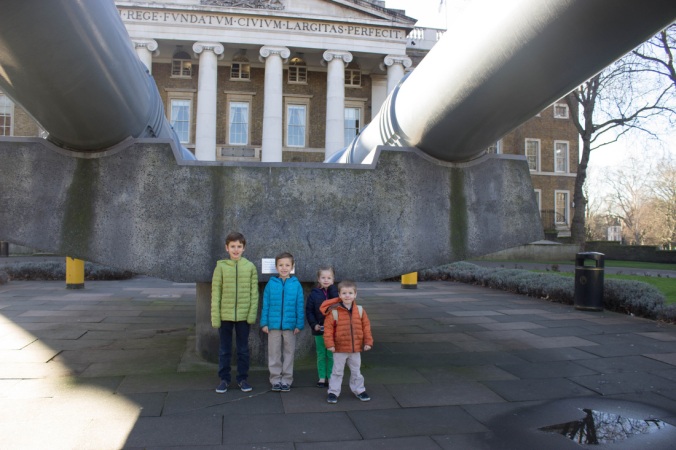 The museum opens at 10:00 and we arrived at about 10:30 and practically had the place to ourselves.  This is an important note to myself for the future, get to museums as close to opening time as possible. The museums in London are almost always busy, especially in the afternoons.

A Spitfire, hanging from the ceiling. The stuff little boy dreams are made of.
They were having an art activity for kids, since it was half-term. There is an exhibit going on right now called “Truth and Memories” and it is various artistic depictions of war, particularly WWI and WWII.  Most of the artwork was done by artists who were called out of regular military service to paint/photograph/sketch the history of the war.  The kids were told to pick their favorite piece from the exhibit and do a simplistic replication, which was then copied onto foam board and made into an ink press. 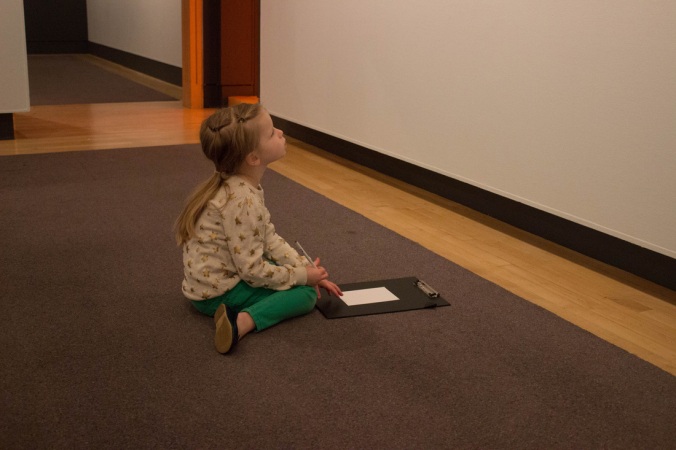 Miriam chose a portrait of a fighter pilot.

Eli and Simon chose a painting of a city skyline billowing with smoke after a bombing.

Cameron chose a drawing of two planes from WWI flying through the sky. 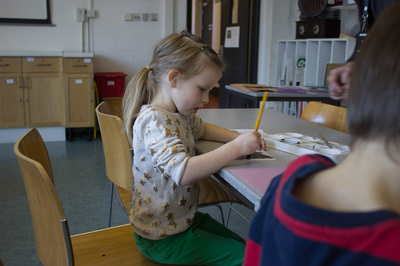 After they finished their ink presses we went to the cafe and ate some snacks.  Then we did some museum exploring. 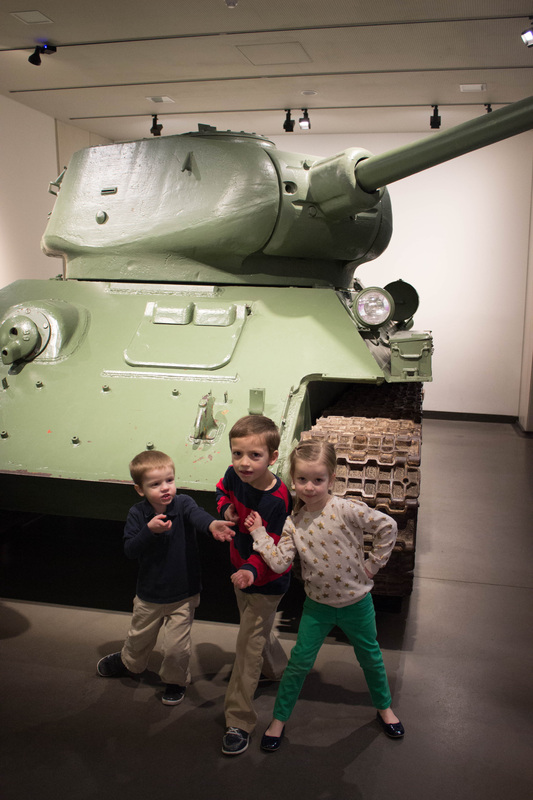 “Little Boy” – there were five casings made for the atomic bomb that was dropped on Hiroshima, and this is one of them, on loan from the U.S. 70,000 people were killed by the bomb, 90% of the city.
Sometime in junior high school I wrote a report about the Enola Gay.  It was the airplane that dropped “Little Boy” on the city of Hiroshima.  I remember even as a tween having a pit in my stomach as I imagined the horror of that mission, that bomb, that decimated city.  Now as an adult it still makes me feel slightly ill what humans are capable of doing to other humans.   American physicist J Robert Oppenheimer, who worked on the bomb, shared his memory of watching the first test.

“We knew the world would not be the same.  A few people laughed, a few people cried, most people were silent. I remembered the line from the Hindu scripture, the Bhagavad-Gita: ‘Now, I am become Death, the destroyer of worlds.’
I supposed we all thought that one way or another.”

I want to share a couple other thoughtful quotes about the bomb, that were posted at the exhibit.

“The bomb has been deliberately placed as close to the center of the building as possible. For me it is the ultimate symbol not only of political power and creative technological development, but also of absolute fear and horror.”
– Roger Tolson, curator

“The development and first use of the bomb is the tipping point of the twentieth century.  Along with the Holocaust, it showed exactly what humanity was capable of.”
– Samantha Heywood, historian 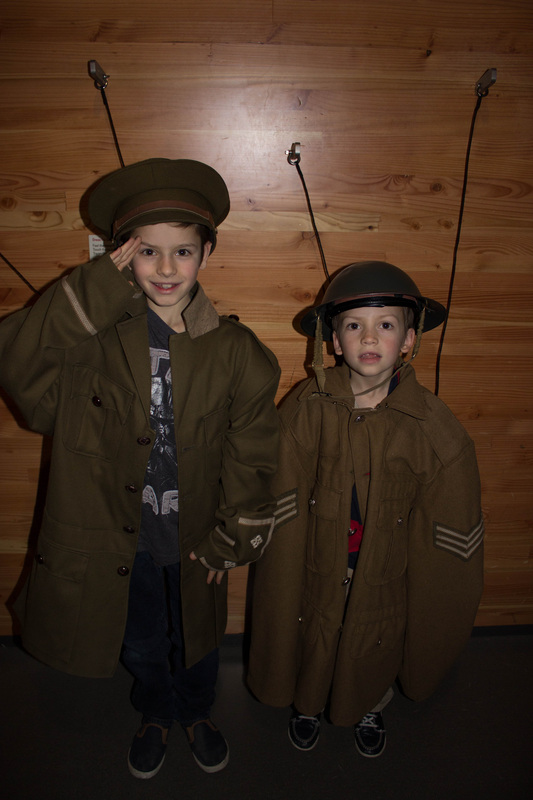 A war museum is a fun place for kids, and that was okay with me.  But it was a bit depressing for me.  The museum is divided up into four floors, WWI, WWII, Post-1945 and then a floor dedicated to the Holocaust.  We made it through the first floor and saw the WWI exhibit.  I learned that when WWI began in 1914 no one expected it to last past Christmas. But new weaponry and warfare completely changed the way war was waged and caught everyone off guard.  I can’t do the explanation justice, but I was completely struck with the disturbing nature of war in that context. Men shooting at each other with guns and cannons and grenades, for a purpose that is completely intangible to them.  It just really unnerved me that the men/women who do all the fighting, suffering, dying and their families who suffer as well, aren’t the people at all who make the decisions about going to war.  They are just there, because their country has asked them to be, and they may or may not feel very confident in their cause. War is just really so, so awful. 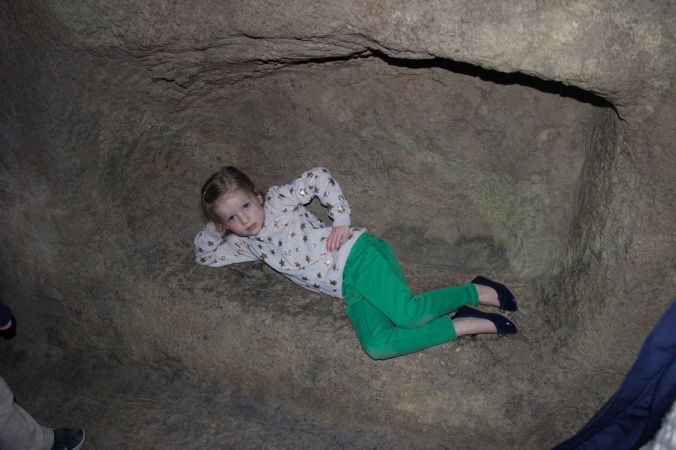 Mim looking pretty chill in the trenches. Talk about juxtaposition…

Eli looking on at a video screen meant to depict what it was like in the trenches.
After we finished the WWI exhibit we went upstairs and didn’t make it all the way through the WWII floor, but we did see an exhibit about a British family of TEN and what life was like for them during the war.  The older daughters were married and had babies of their own, the older boys went off to fight, and the younger girls stayed back and found work and purpose in the war effort at home.  It talked about rationing, bombing raids and other ways the war affected daily life.

Our bishop was a young boy in London during WWII.  He has told us, Richard in particular, many stories about what life was like.  I’ll save those for another blog post- but he was evacuated from the city twice (children in London were sent to the countryside for safety), had to spend hours in a wet and cold Anderson shelter, and had to ration just like everyone else.

The Anderson Shelter- 3.5 million of these shelters were given to British citizens during the war, they were prefabricated and sent to families to assemble one meter deep, then covered over the top with dirt and plants. They were used during the Blitz, and were designed to hold six people.

Sitting inside the Anderson shelter.
After finishing up the Allpress Family exhibit we wandered around and looked at a few more things before calling it a day.  I know I keep saying this, but I’m sure the older boys and I will go back to see more of the museum but Mim and Simon were spent.

This was a civilian fishing boat, the smallest remaining “little ship” that helped ferry soldiers from the coast of France back into England. Operation Dynamo is one of my favorite WWII stories, and I think I wrote about it back when we visited Dover.
We made our obligatory post-museum park stop, then bought some crisps and took a sunny, warm, sleepy bus ride home. 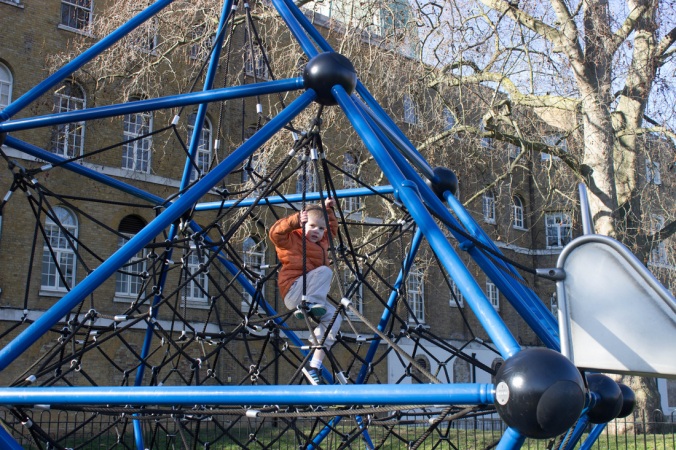 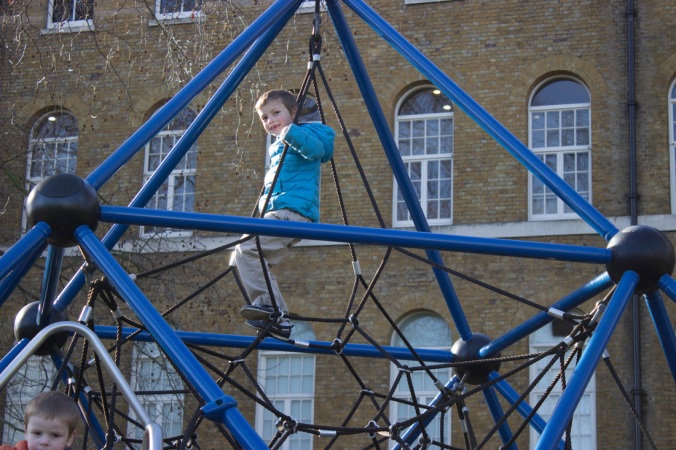 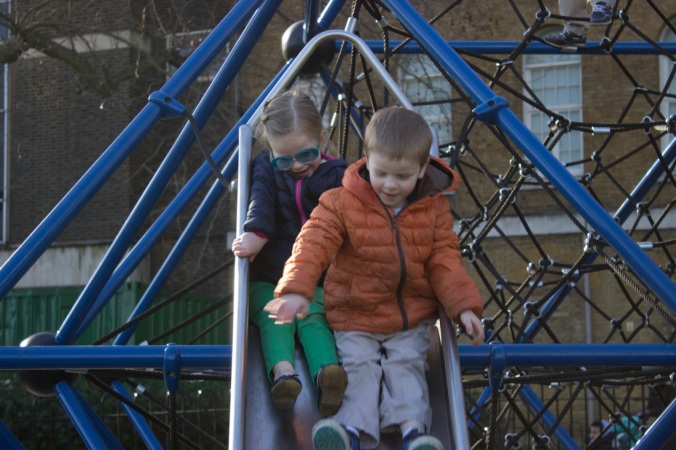 One thought on “The Imperial War Museum”