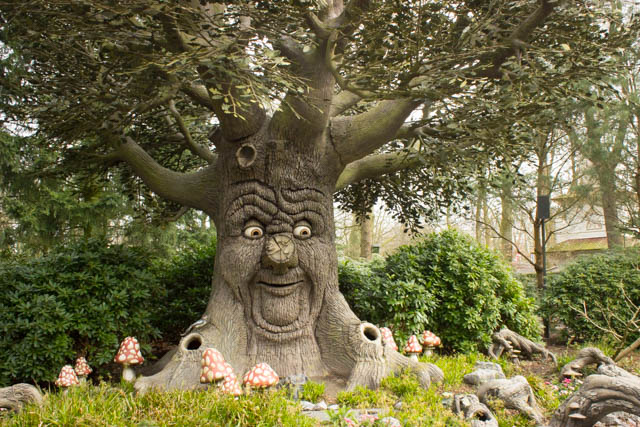 If I was a big-time blogger and wrote sponsored posts, I would write one for the TripAdvisor app.  That app is such a treasure trove of travel resources.  Second only to knowing locals.  I found Efteling on TripAdvisor and it completely lived up to it’s rave reviews.  It was everyone’s favorite part of the holiday.

It’s an amusement park with a fairy-tale, folk tale, fantasy theme.  But fairy tales in their old-school form, pre-Disney.  I love Disneyland, and it will probably be forever untouchable in the ranks of amusement parks, but Efteling had a lot to offer.  (It was actually even built before Disneyland.)  It was charming, not crowded, and really inexpensive, while still offering and endless array of attractions, thrill rides, shows and FOOD.  The kids loved it too, and it was really laid-back.  In fact, we probably should have amped-up our intensity because we were there until closing and didn’t get to do some of the things we wanted to.

The entrance reminded me of something out of a Tolkien novel.

It was about an hour and a half drive from where we were staying, and we hit some bad traffic so we got there about thirty minutes past opening.  But there was no queue, so we just parked and walked right in.  The weather was nice- it was overcast but not cold or rainy or windy.

Richard knew that the Fairy Tale Forest would be a big hit with the kids so we went there first.  After a quick stop to see this amazing diorama.

This is the Dutch word for Fairy Tale Forest. All the signs were in Dutch, which was both delightful and annoying.
Fairy Tale Forest included a lot of fairy tales we were familiar with (Sleeping Beauty, Rapunzel, Rumpelstiltskin, Tom Thumb, Snow White, Cinderella, Hansel & Gretel, Little Red Riding Hood and The Emperor’s New Clothes.)

But there were several others that were new to us.  It’s probably just a matter of time before Disney gets their hands on these tales.  The Six Servants.  The Wolf and the Seven Young Kids (Another Big Bad Wolf story.)  The Red Shoes.  (Pretty creepy.) 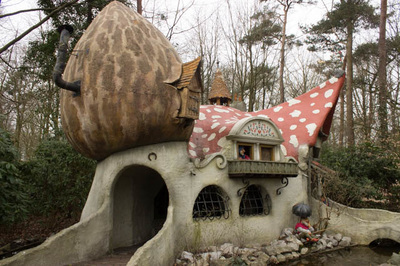 This is a garbage can, and when you hold your rubbish up to his mouth, he sucks it in. The kids were fascinated.

I had read on TripAdvisor that the food at Efteling was really affordable so I didn’t even mess with packing snacks.  In Fairy Tale Forest we stopped for a snack of waffles and doughnuts and saw this beautiful peacock and got photo-bombed by a pigeon.  Sorry Eli. You really are a part of our family.

We finished Fairy Tale Forest just in time for a show called Raveleijn – it was in Dutch but the special effects were pretty impressive.  Horses, trick riding, some Cirque-du-Soleil type maneuvers, a massive animatronic fire breathing six-headed dragon, and some sword fighting dramatics.  Just the kind of stuff kids love.

I put my camera away during the show and then for awhile afterward.  We did some more rides including a monorail type ride for the non-thrill seekers, my favorite- the swings, a couple playgrounds and then this carousel.

I’m so over mazes, but the kids never get tired of them.

We took a break for lunch, which included a lot of frites, and then went on to the more adventurous attractions. 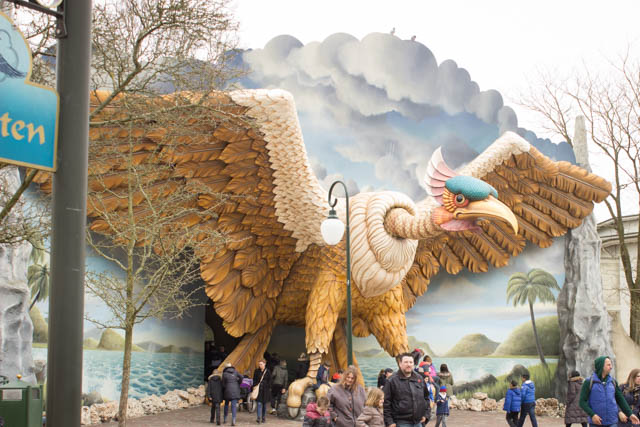 Did I say adventurous? Do peddle-trains count?

You can see the huge grin on her face in this one. She was loving it. And it just kept getting higher and higher… 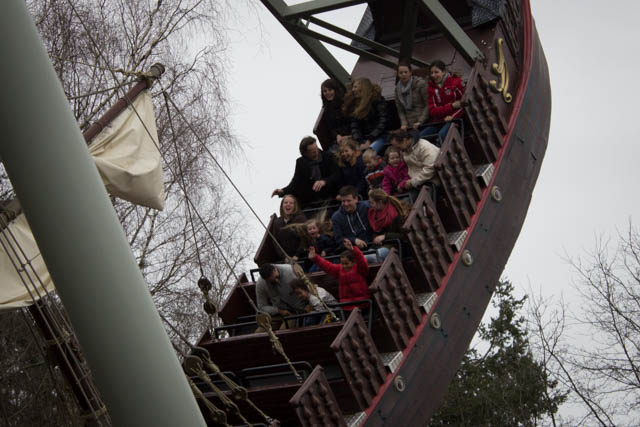 If you’re a parent you probably know the moment well. The moment when the smile ever so slowly turns to a frown, as if the child can’t decide if they should laugh or cry. And then – they cry. Poor Mim. It got to be too much for her and I had to cover her eyes for the rest of the ride. By the end she was not happy with me.

Richard and I had a good laugh about it. Like all great parents do. 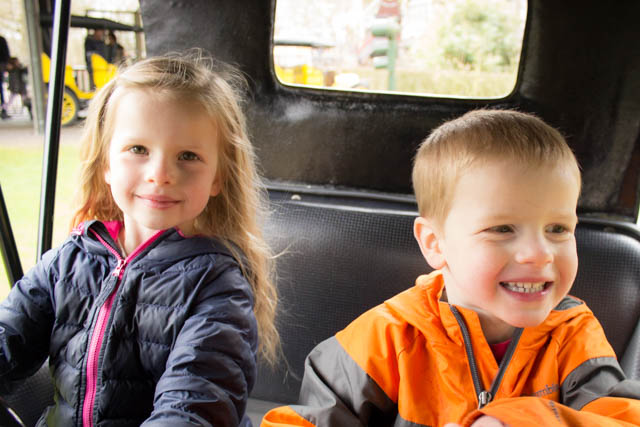 Something a little tamer to calm her nerves. 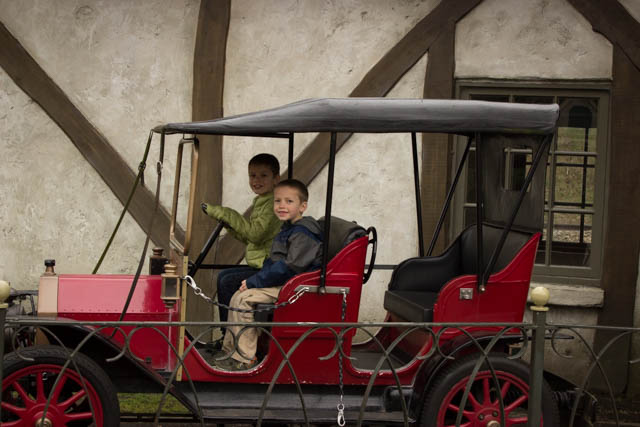 There was a ride with an international theme that resembled Small World.  There was also one that was probably the kids favorite that was easy going with just the right amount of twists and turns, it was like Toad’s Wild Ride or the Peter Pan ride at Disneyland, great things to look at while you wind through the darkness.

There were two or three other rides we really wanted to do, but sadly we ran out of time.  So we bought cotton candy and watched a really fun fountain show they play as the park is closing.  In the summer months the park is open later, but Richard and I decided that we probably got to do just as much as we would have in the summer because we rarely had to wait in any lines, and when we did they were just a few minutes.  So in other words, one day just wasn’t enough. 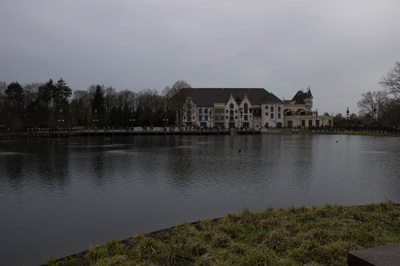 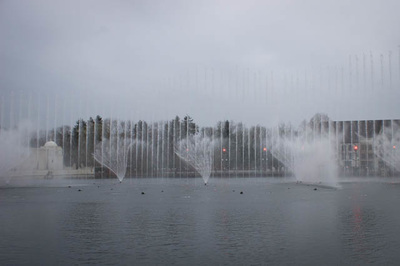 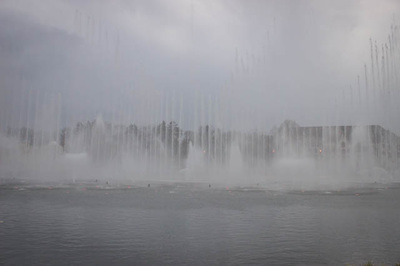 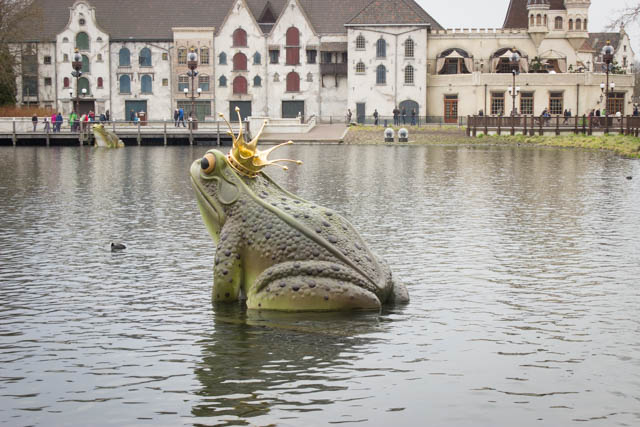 There was some magical significance to this frog (and the three others just like her), that sadly I’ll never know, because I don’t speak Dutch.

“Why do you take your kids when they are so young? They will never remember it.”