Last Monday was another bank holiday for Richard and the kids were out of school for half-term so we decided to go see Stonehenge.  The first part of the drive was the same route we had taken the day before on the way to the temple, and the day before that on the way to Tilgate Park, but who can tire of such a pretty drive?

You can see Stonehenge from the motorway as you are approaching, and they have built the Visitor Centre and car park a fair distance away, so it creates a nice effect.  There they are, these giant stones, it what honestly feels like the middle of nowhere.

Carbon dating estimates that Stonehenge was built over 4,000 years ago.  (Approximately 2,500 B.C.)  There has been extensive study and excavation and archaeological research, but still no one is certain what it’s purpose was.  Richard and I were completely fascinated, but the kids were only interested for about the first 15 minutes. 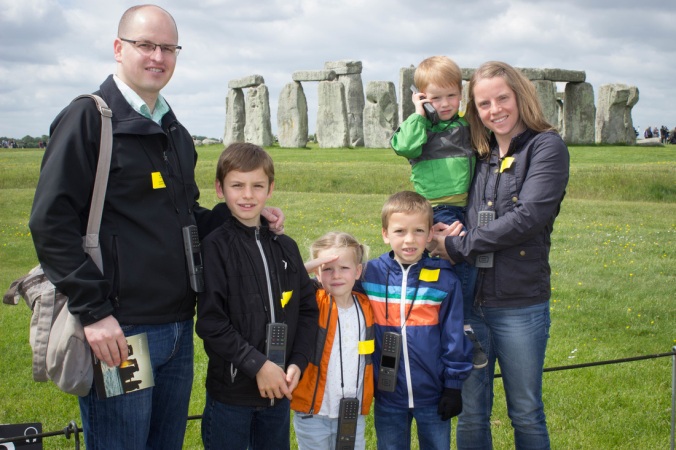 Yay for audio-guides! (Or else the kids would have only been interested for about 30 seconds.) 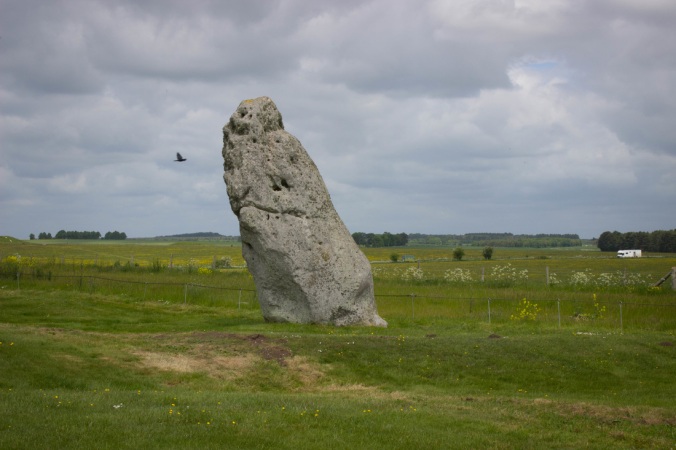 The “heel stone.” At summer solstice the sun rises directly over the top of the stone. Last night Richard and I were discussing with my dad how a civilization could ever figure out what a solstice was, when it was, and what it meant to them.

There are several stone circles in the UK, but Stonehenge is unique because of the stones that lay horizontal across the top of the vertical stones. They are called lintels.

The small dome on the top of this vertical stone is like the joint, and concavities were chiseled into the horizontal stones to fit on top.
After we finished the audio tour we took the shuttle bus back to the Visitor Centre and walked through the museum.  It was really interesting too, mostly just the complete ancient-ness of everything blew my mind.

We left Stonehenge, and drove around for too long looking for a park or place to eat our picnic lunch.  We had to settle for pulling over on the side of the road, but it was still a nice view.

We decided to spend the afternoon doing a little exploring of Wiltshire, and our first stop was the town of Lacock.  The entire village is owned by The National Trust, which means it’s charming and well-preserved.  It has been used in the filming of Pride & Prejudice (as Meryton), Harry Potter, Larkrise to Candleford, and Cranford.

Richard and the kids stayed at a park and played while I meandered through the quaint little town.  Unfortunately, the town was hosting some kind of event/scavenger hunt/public festival and it was heaving (as the British say) with people.  I couldn’t get many pictures that weren’t full of strangers, but it was fun to see. 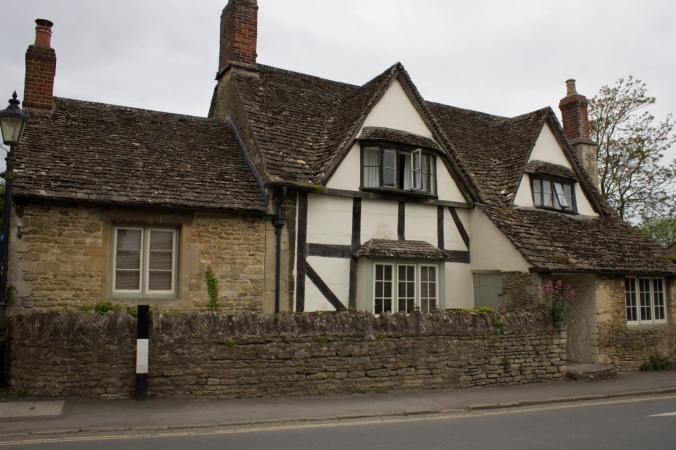 Our next, and last stop was the town of Castle Combe.  It was a little bit of paradise, completely removed from the outside world.  Even the electrical lines are hidden from view. 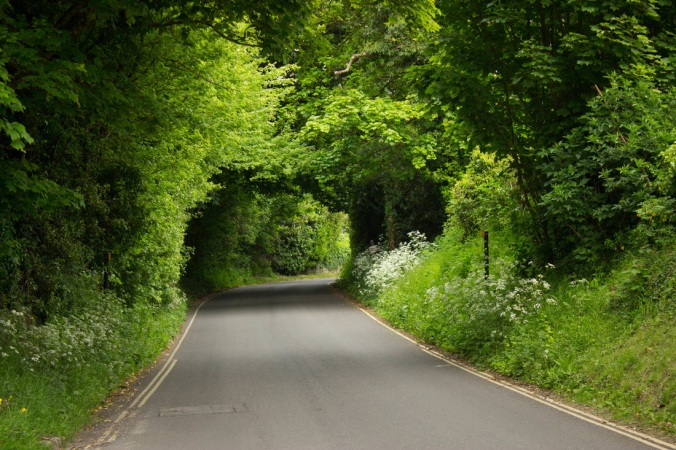 This reminded Richard and I of Ireland, where it always feels like you are driving through a tunnel of trees. 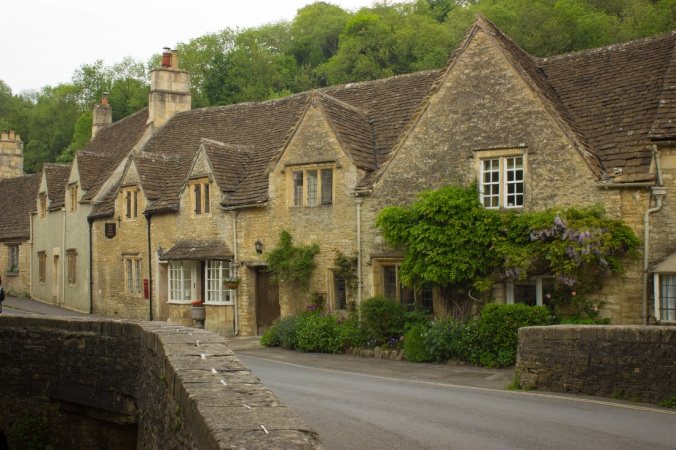 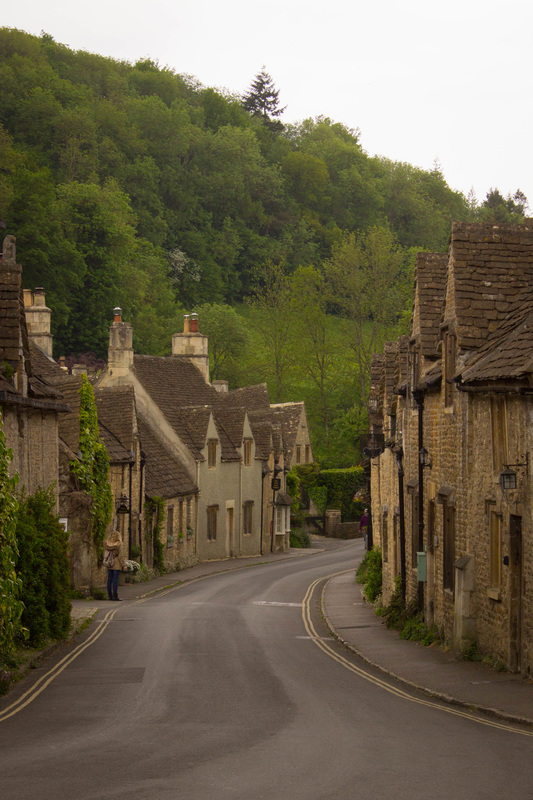 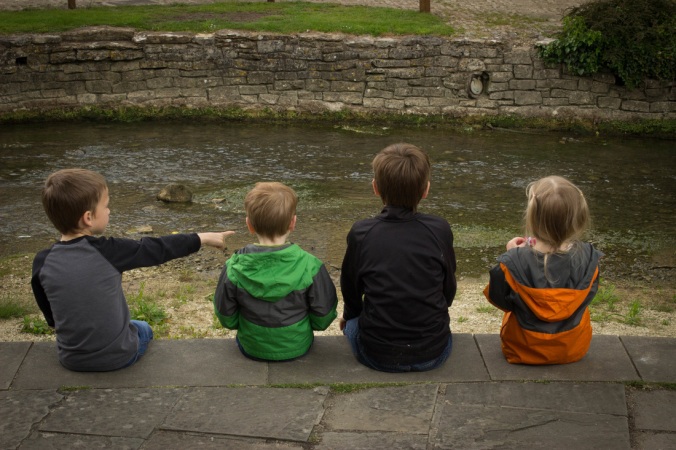 The kids were watching fish jump in the stream. It was so pleasant and peaceful, until the moments after this when disaster struck…
We walked down the road and found a public toilet, albeit a dodgy one probably as old as the town itself, and made the kids use it. Then we walked back up to the town to see the cathedral.  Inside the church Simon loudly proclaimed that he had fouled in his pants.  (I take that language from the signs I see in grassy areas that say “No dog fouling.”)

What do you do?! I mean seriously.  There he is, standing with poo in his clothes in a cathedral.  I walked him back down the road to the toilet, and stripped him down in the icky stall, and pondered my options with the desecrated underwear. There was no trash bin in the stall or the bathroom, so I would have to take them outside to the bin and chance being seen by responsible adults who have either never had children or have never had to deal with this situation, which would surely result in looks of disgust and judgment that might be too much for my fragile psyche to handle.  But alas, I had no other choice.  Fate was on my side and I managed to dispose of them without being discovered.  I cleaned up Simon the best I could, but about 45 away from home he started crying about his “crusty bum.”  Richard and I didn’t have much sympathy for him.

In the meantime Richard had walked with the other kids back out of the town and retrieved the car and came and rescued us from the dilapidated restroom and we headed home.  It was about a two hour drive back to London, and then another hour across and through the city before we made it to our house.  We were a pretty pathetic lot by the time we walked through the doors, it had been a long and tiring day.  I think we ate eggs and cereal for dinner and we all went to bed.