After we got back from Auschwitz on Friday evening we wandered the market square and had a delicious and really inexpensive (everything in Poland was so cheap!) dinner al fresco.  It was a beautiful day and we just enjoyed our food and watched people out in the square. 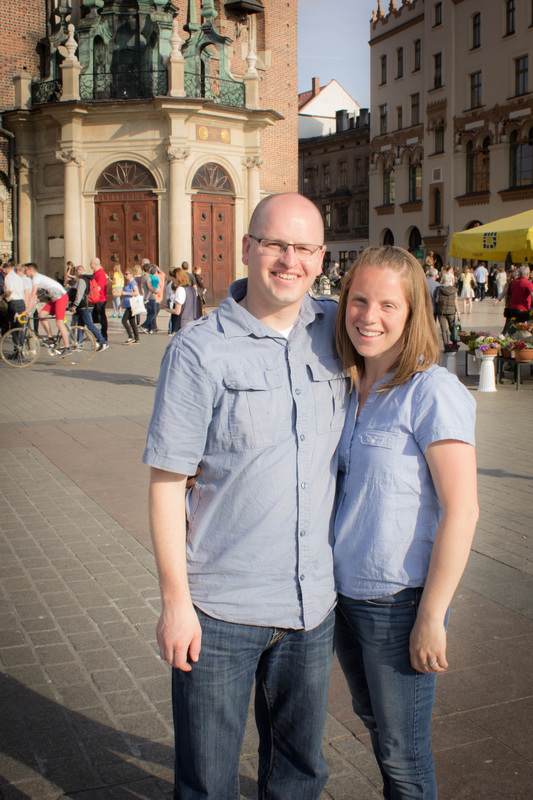 This guy was so good it took me a few minutes to be sure he wasn’t actually a statue. We ate our dinner close by and watched as people passed him, sometimes not even realizing he was real. (We had a good laugh each time someone would all of the sudden realize he was real.) 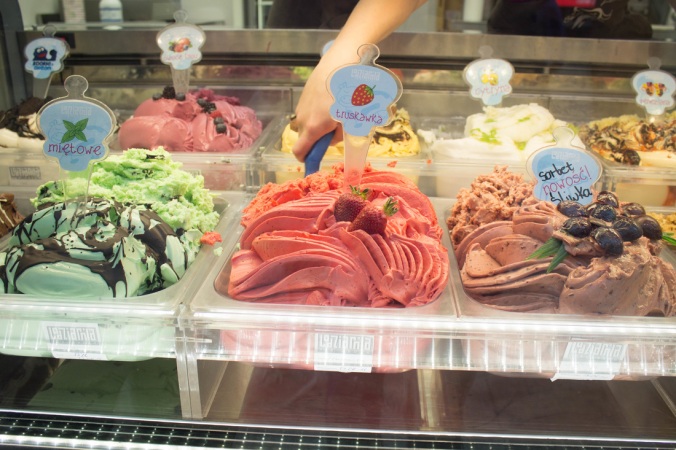 I officially kicked off the “Summer of Gelato No-Regrets.” We have a lot of trips planned this summer and I am determined to eat as much gelato as we possibly can. Our kids are sooo lucky to have me for their mom. 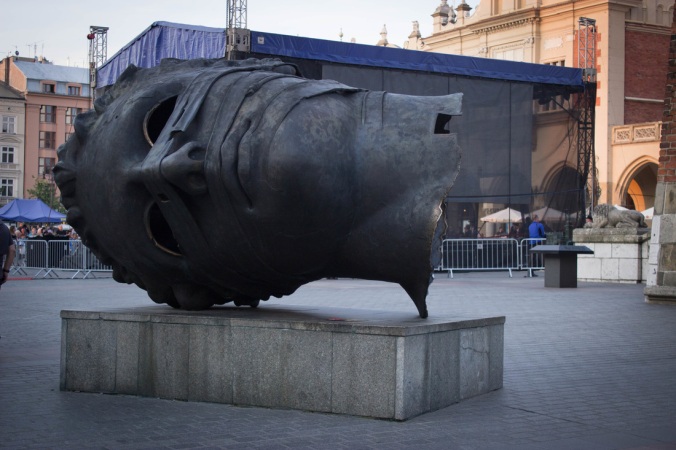 Eros Bendato- a sculpture by Igor Mitoraj. I have no idea what it means.

On Friday we walked around the outside of the Wawel Castle, but had no idea what it was.

Wawel Castle & Cathedral from outside the gates. 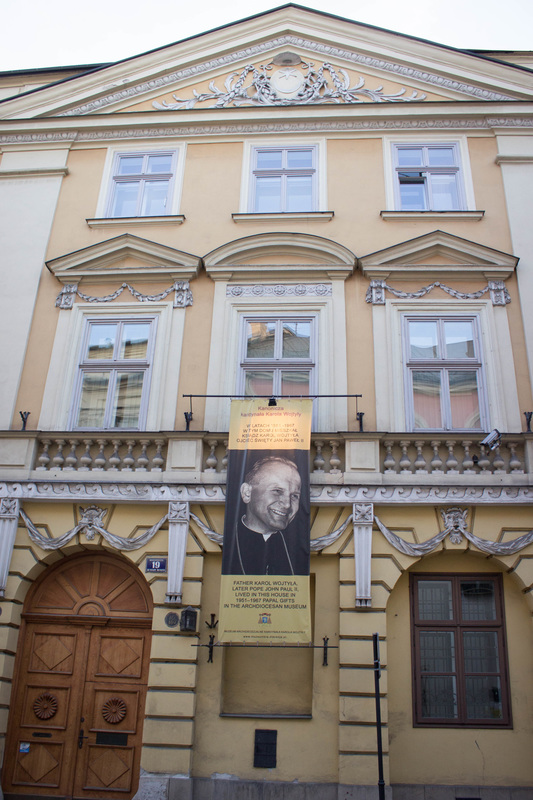 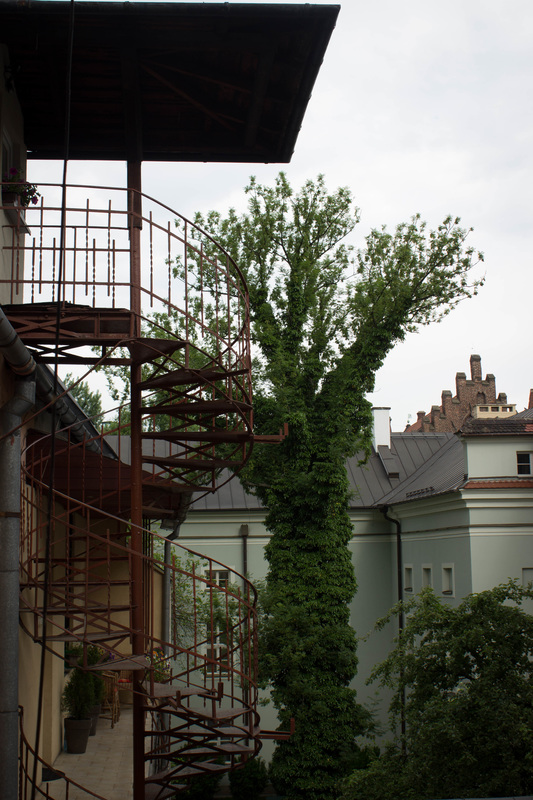 The view from our rented room in downtown Krakow. It was £55 for two nights!
We took our time on Saturday morning and eventually made our way to the Schindler museum.  One of Richard’s coworkers had recommended it.  We spent hours there, there was so much information, but I pretty much max out in museums at three hours.  My brain turns to mush and I can’t intake any more.  Despite including the story of Oskar Schindler which was mostly hopeful and inspiring, the museum was more about the city of Krakow during WWII, which was depressing and sad.

Oskar Schindler’s Factory was the inspiration for the film Schindler’s List. Honestly, all I remembered about that movie was sobbing at the end, and I can’t even remember why. The Schindler story was mostly a happy one. 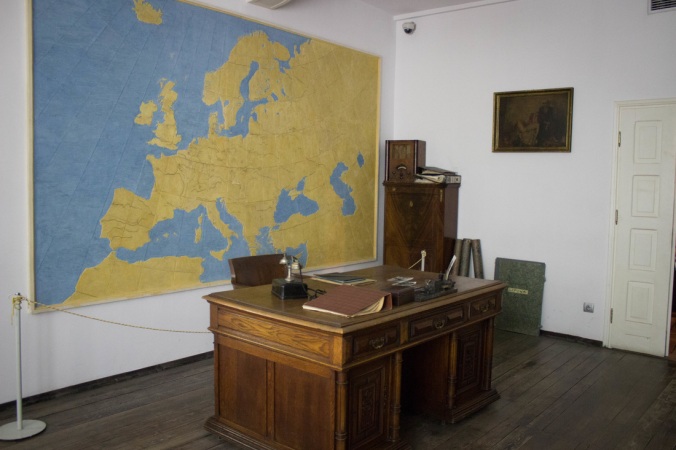 Office of Oskar Schindler
The end of WWII was not a happy and exciting time for Poland like it was for the U.S. or the United Kingdom.

“The history of Poland from 1945 to 1989 spans the period of Soviet communist dominance imposed after the end of World War II… These years, while featuring general industrialization and urbanization and many improvements in the standards of living in Poland, were marred by social unrest and economic depression.” (Wikipedia)

We realized this as we left the museum and it left both Richard and I feeling really somber.  After enduring the severe deprivations of the war years, along with the mass murder of millions of her people, there was no happy ending for Krakow.

I was expecting to feel depressed after visiting Auschwitz, but I think the museum caught us off guard.  We walked somewhat aimlessly until we came to the river, and then walked along the river greenbelt in the sunshine which seemed to lift our spirits.  We ate lunch on a river boat and had a nice chat about our future.  Looking back I can see how that conversation was a manifestation of gratitude we were feeling for the blessings we can enjoy and look forward to in our lives. 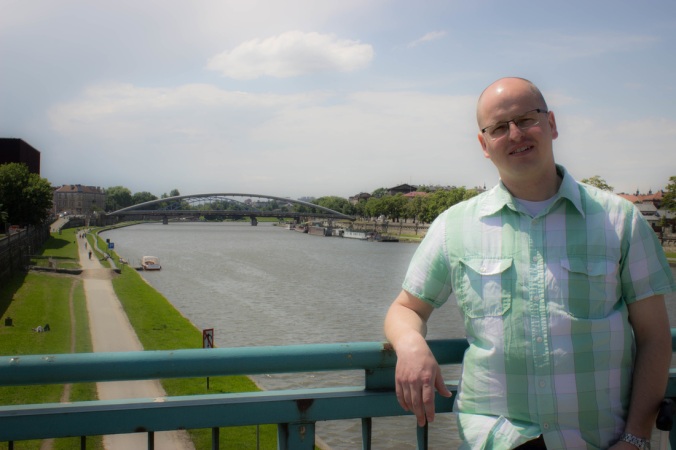 After lunch we wanted to go see the Wawel Castle from the inside, so we headed that direction.  We came across a summer fair along the banks of the river where I had some more pierogi.  Then came the downpour.  It started to rain so Richard and I wrapped up in his coat and huddled under a tree. It probably only lasted 20 minutes, and it was kind of romantic.

You’d never guess it would be pouring rain in less than an hour.

Pierogi are like little dumplings, stuffed with all kinds of things like cheese, potato, meat, and fruit.

“Skalka” – Church on the Rock 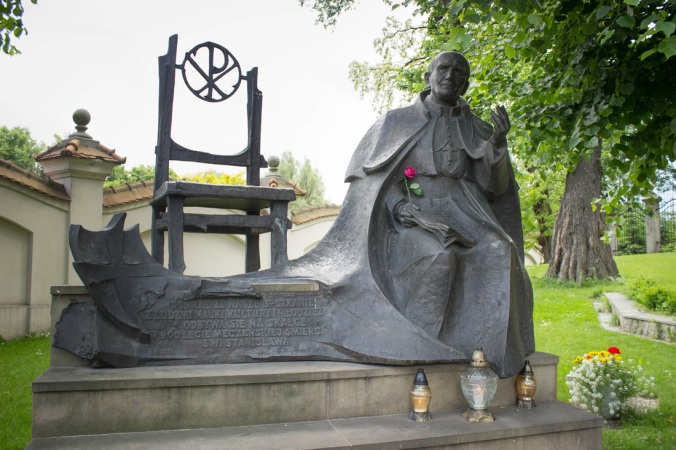 Because he was from Poland, there are monuments to Pope John Paul II everywhere.
After the downpour was finished we made our way to Wawel Castle, which sits up on a hill and was just stunning.  The castle grounds were really fresh and clean from the rain, and when the sun came out it was really warm and gorgeous up on that hill.  From the castle we walked back down the market square and ate some dinner before catching a cab back to the airport for our 9:50 flight. 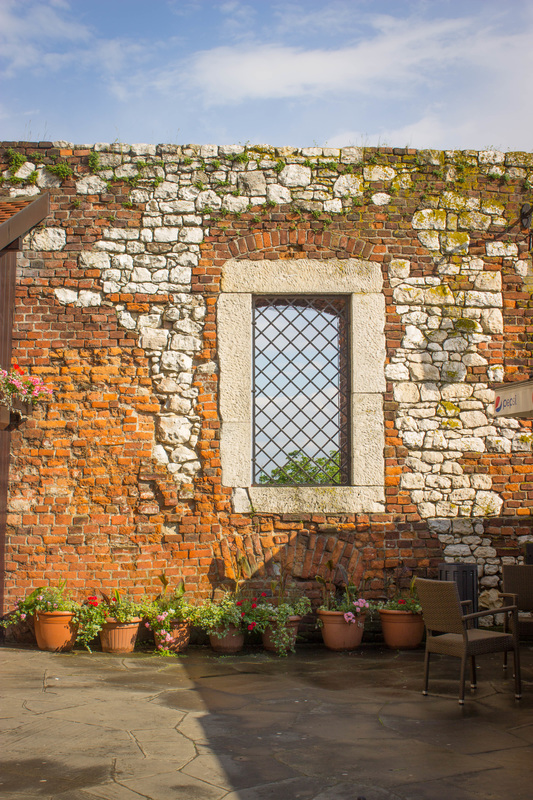 In the courtyard of Wawel Castle.

I usually prefer symmetry and order in architecture, but I thought the creative design of this cathedral was really impressive. You can get some context for size by looking at the people walking around the courtyard.

The rain and humidity did a number on my hair, so I’d resorted to my stubby ponytail. 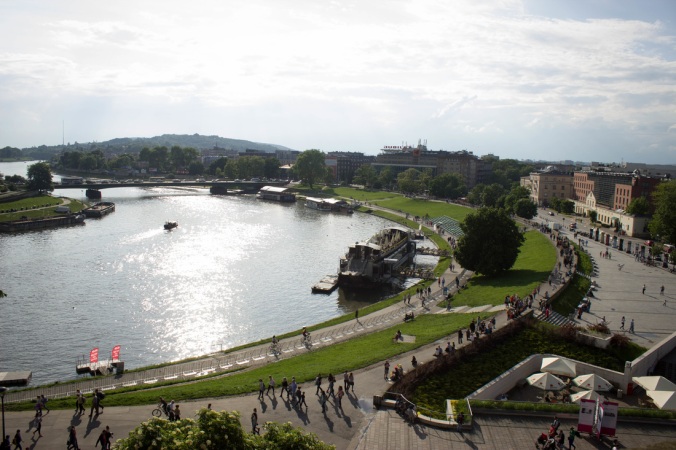 The view of the river from the castle. 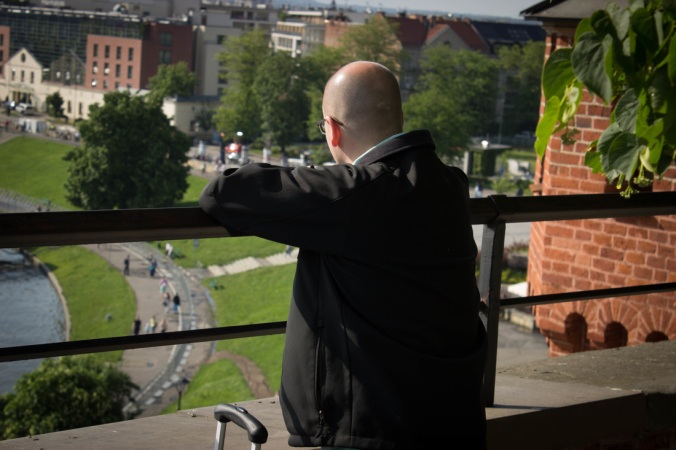 Wawel Castle was awesome.  The city of Krakow was lovely.  The history was painful.  It’s so easy to romanticize these vacations.  But traveling with family members can be difficult and this trip in particular took an emotional toll on Richard and I.  I want to keep it real in this space, and be authentic. Having these opportunities is such a blessing, but it’s not always pleasant.  Krakow just was what it was, and I’m grateful to have been there and hopefully be changed in meaningful ways because of it.

One thought on “Krakow”