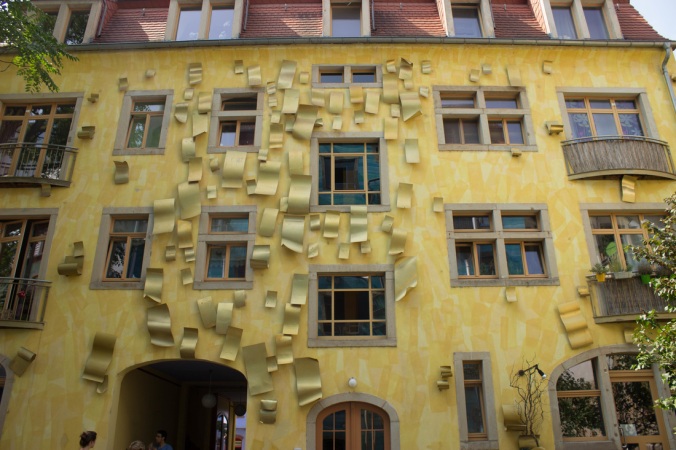 From the “Courtyard of Elements” in Kunsthofpassage.
At some point, either before we left or at the beginning of the trip, I made a choice not to be a drill sergeant travel mom. It was too long of a trip to push hard every day, and I had to be realistic about my expectations of my kids.  So every morning I let everyone sleep until they woke up naturally, (which for young kids isn’t really that late anyway).  We looked into our church options for Sunday but the meeting was at 9:00 and the day before had been so long that we just didn’t make it.  I put some spiritually-minded videos on for the kids while we got ready.

We got to the train station about 10:00 and did our best to decipher the German and buy tickets for the day.  Many places we visited had a family ticket that was good on all forms of transport (train, bus, tram, metro), or else we could buy a day ticket for each of us and Mim & Si were often free.  The kids were really impressed in Dresden with the double-decker trains, and it was fun to ride on top and get a better view of the city.

Dresden was such a sad place for me.  I’m not really sure why I chose it to be honest. I think I wrote a report about the bombing of Dresden when I was in 8th grade, and so it tugged at my heart strings.  Originally we planned to drive up to Berlin, but decided that was too far north, so I chose Dresden as our stopping place.  As we rode the train into the city I wasn’t even sure what we were going to see or do.

Before WWII Dresden was known as the “Jewel Box” because it of it’s many beautiful baroque buildings, but the city center was virtually destroyed during the Allied bombing in February 1945.  Traveling through the city there were places that you could tell had never been rebuilt.  After the war Dresden was part of the GDR (East Germany) and so a lot of rebuilding didn’t even begin until 1990 after reunification with West Germany.

Despite the tragic history of the city, it turned out to be full of beautiful things to see, amidst a lot of rough neighborhoods and parched August gardens and parks. 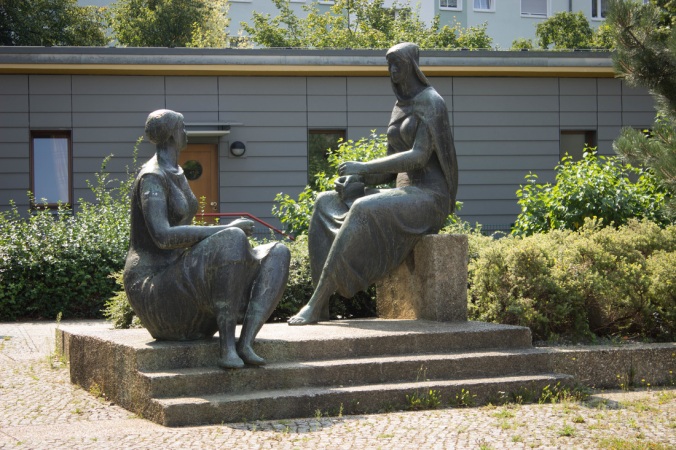 I feel like this sculpture was a good representation of my Dresden experience. A beautiful piece of art in a dilapidated and neglected courtyard.
It didn’t take us long to learn that many businesses, shops and restaurants don’t open on the weekends.  Richard and I found that both impressive and inconvenient.  Europeans just have such a different perspective about commerce.  Personal life really matters, weekends matter, bottom-lines are only second priority.  In any case, we found a bakery nearby the main train station and had some pastries for breakfast.  They were so good and we were so hungry that as soon as we saw a second bakery that was open, we had second breakfast.

We walked toward the aldstadt (old town) and on our way stopped in the market square.  My favorite part of any European City. 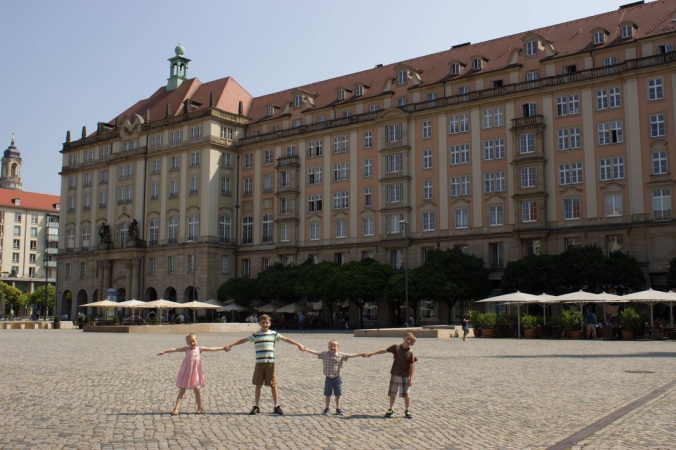 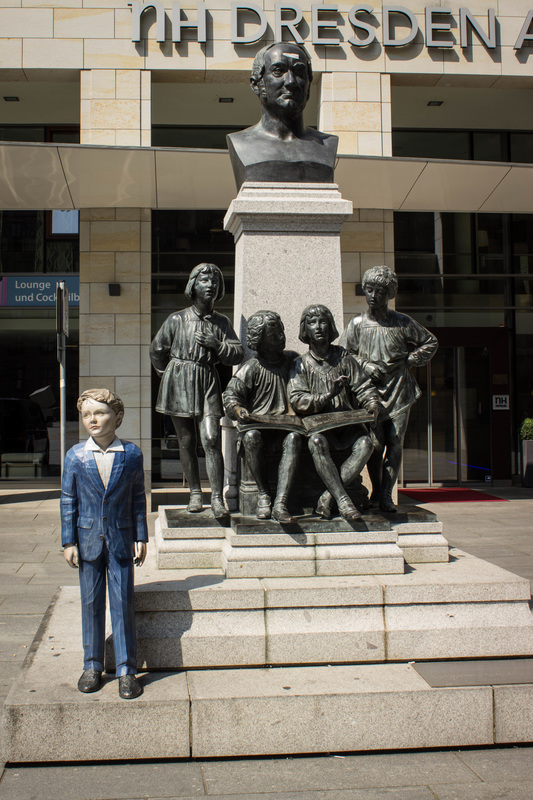 This is a monument to Julius Otto, a well-known director of the Dresden Boy’s Choir, which has existed for 700 years. The addition of the boy in the blue suit is a recent addition to the statue, to indicate a change in the choir uniform.

The Procession of Princes- A tile mosaic of past Saxony emperors makes up the largest porcelain artwork in the world.

These biblical depictions in the architecture of European churches never get old for me. 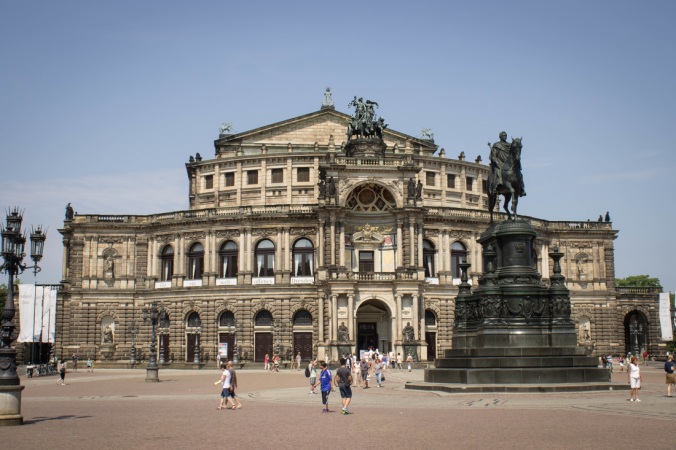 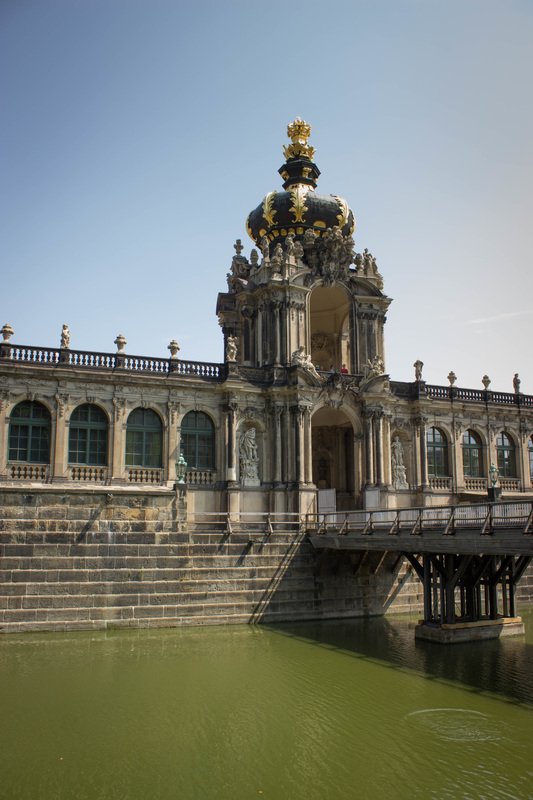 It was another hot day so we put our feet in the fountains. (Everyone was doing it…) Then I tried to get an action shot of the kids. The funny thing was, by the time we finished the effort there were three or four other people taking photos. I guess in Europe, a family of four kids is it’s own kind of novelty. 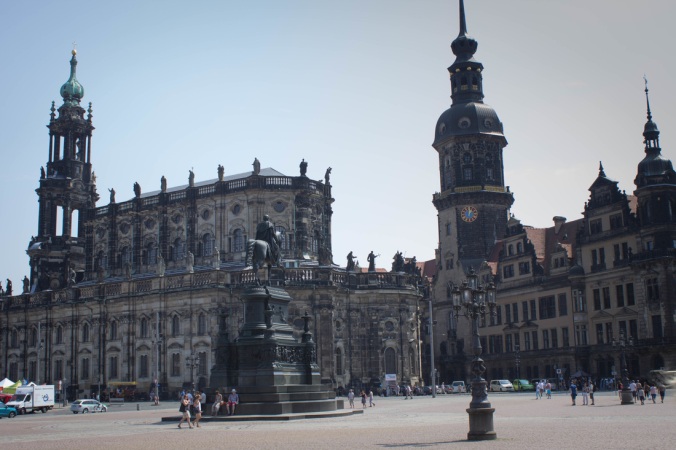 We crossed the bridge over the River Elbe into the “neustadt” (new city.)  As an interesting side note, the “old city”  was destroyed in the war, so it is almost entirely restored, making it actually newer than the “new city”.

Once again it was Sunday so it was hard to find a place to eat, but we settled for some street food; pizza and bratwursts.  From there we walked to a passage-way I read about on Pinterest or somewhere called “Kunsthofpassage.”

Apparently in Dresden, there is a fine line between graffiti and street art.

The “Courtyard of Elements” includes this building, which is a system of pipes built in a way that makes music when rain falls and water drains through them.  It was inspired by Rube Goldberg Machine, “converting the mere patter of rainfall into a spectacular orchestral symphony.”  Sadly it wasn’t raining when we were there, but the kids were nonetheless entertained by cooling off under the dripping funnel.

It was hot and the kids were spent so we took a tram to a park Richard found on the map.  We found some ice lollies to help us cool off, and then just let the kids play in the grass. 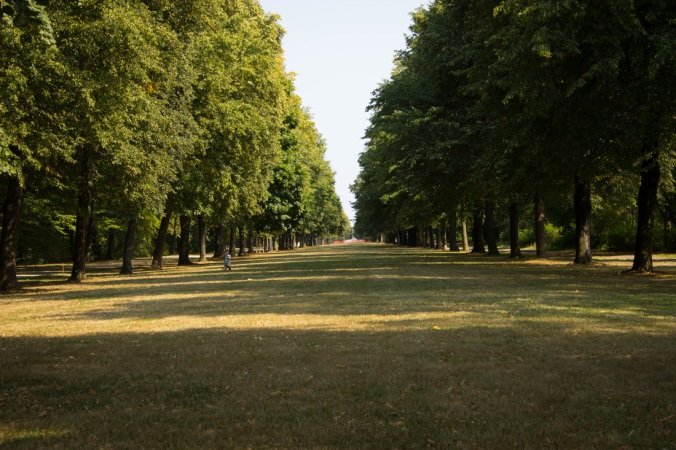 I don’t think Europeans like to waste water on city park lawns anymore than they like to waste energy on air conditioning. I have mixed feelings about this- but I respect their values. 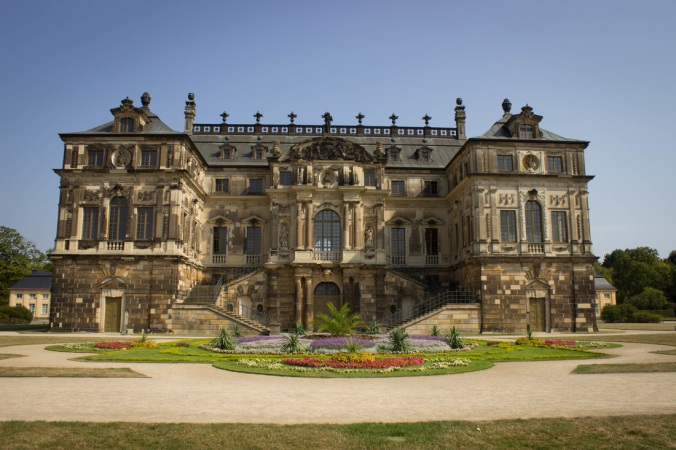 The Dresden Summer Palace at the center of Grosser Garten.
After Simon messed his pants and the rest of the kids were sufficiently exhausted we caught the tram back to the main train station, bought some groceries for dinner and went back to our apartment.  We played games that night and had an early bedtime.