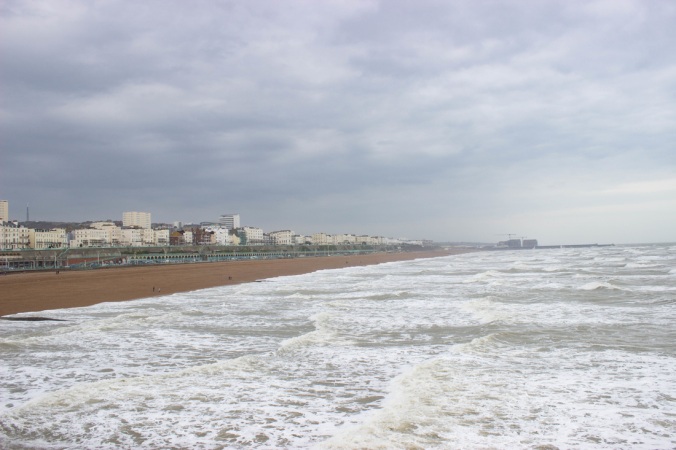 I’m sure we picked the worst time of the year to see England’s most famous beach.  But we knew that we probably won’t have any better opportunities, considering our list of things to see is not shrinking, so one Saturday we decided to just make a day of it.  Because we are in South London, it’s a pretty straight shot out of the city and it didn’t take us long to drive down.

It was really windy, cloudy and although we didn’t get rained on, we were cold.  That didn’t stop the kids from wanting to play on the beach, which they did for as long as Richard and I could handle it.  Then we we went to the Brighton Pier, played some games in the arcade, and just watched the crazy waves crash into the pier and the shore.  There was actually a guy surfing that we watched for a bit too.

Many (most?) of the British beaches we’ve been to have been rocky and not sandy. So I didn’t feel to badly about missing out on this tourist stop in the summer time.

There were a lot of fun restaurants and shops all along the beach front, boardwalk style. I’m sure in the summer time there are people everywhere eating ice cream and flying kites. 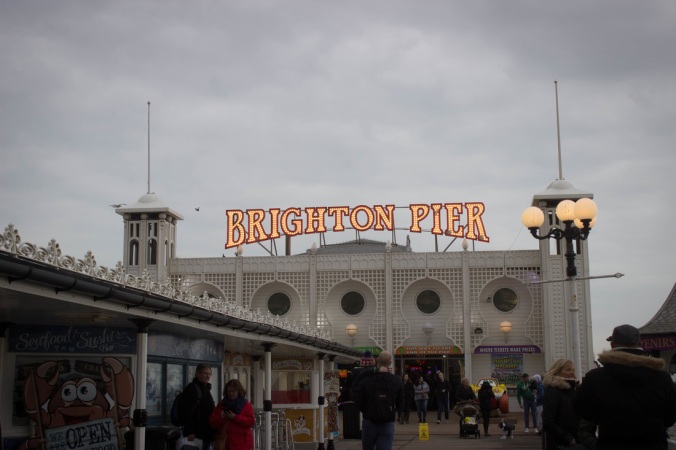 We found a place to eat a late lunch/early dinner, which took longer than I had expected.  I wanted to see the Royal Pavilion, but it was dark by the time we finished, so we just did a drive-by.  (We had seen it as we came into Brighton as well.  It’s gorgeous.)

It wasn’t at all the Brighton experience I’ve read about in Jane Austen books, but it is always nice to get out of the city for a day.