Here’s what we did last Friday night.  I highly recommend it, if you don’t mind someone kicking you in the back all night.  (Richard was out of town, this was Eli.) 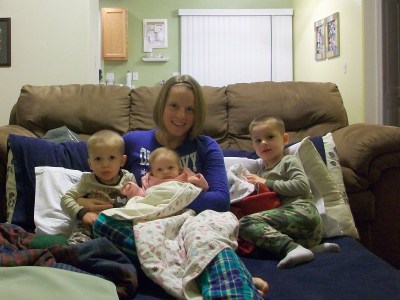 First we rushed to the Kuna library ten minutes before closing to get a couple movies.  I told the boys we had to hurry because it was closing soon.  As we were checking out the movies they shut off the lights and made an announcement over the loudspeaker that they were closed.  Cameron burst into tears, thinking we were too late.
Cameron chose Sleeping Beauty and Eli chose some movie about a pond and talking frogs with some kind of moral message about responsibility.  (I let them watch that one without me.) 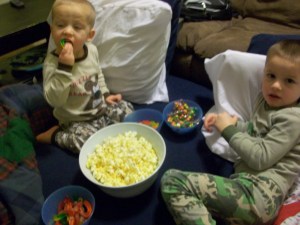 We dragged my mattress out to the living room and stuffed ourselves with junk food while we watched Sleeping Beauty.  I love those Disney classics.  Then the boys’s eyes started to get heavy so I put on The Cosby Show Season One.  Another classic that, for me, guarantees loud laughter.
For the sake of those who keep up on the American Academy of Pediatrics recommendations on television viewing for infants and children, Miriam did not participate.  She was just around for the photo-op and then went to bed in her own quiet room, free of kicking toddlers.