At the outset of 2010 I determined to do another year of homemade gifts. That is, I determined to last the whole year this time.  My apologies to all my family members whose birthdays fell after, oh about April.  I sort of burned out a little too early.  Part of my burn-out last year was the difficulty of coming up with ideas for certain family members.  So to prevent a relapse I have come to a compromise.  Where possible, I will make the gift.  But I would rather not have it be homemade than just ignore the birthday altogether.  I’ve tried to compensate for lack of homecraft by being more thoughtful in my gift giving.  The gift I’m most excited about was a pair of tickets for my brother-in-law to see the play “Jack in the Beanstalk” with his little boy in their hometown of Las Vegas.  The tickets were inexpensive (sorry Will!) but required a little time on the www to find.

**As a side note. For my birthday a friend of mine put together a playlist on iTunes of her favorite songs, paid for them and then gave me the download code.   It was so thoughtful.  My sister did a similar thing and made me a cd of her favorite running songs to get me motivated.  My mom used her talents to sew new cushions for our rocking chair, pictures of that coming soon.

Anyway, I did make this gift for my sister.  It is a journal of sorts.  It’s a box with labeled months. Behind each month is a number of lined slips of paper for recording daily activities, funny moments, short little thoughts, children’s milestones, etc.  I liked the idea so much I started recording my own little entries.  Now I just need to make myself a box.

These were more of those crystal light/wylers containers that seem to be multiplying around here.  I just mod-podged wrapping paper on them for some V-day treats. 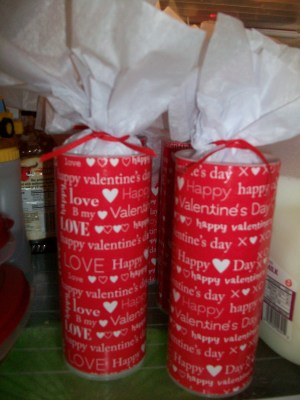 This was not my idea.  I learned how to make these here.  I made a few for my sister-in-law’s birthday. (Ignore the tacky yellow t-shirt. I was too lazy to change for my photo.)
Cheers to thoughtful/homemade gift giving!