Eli has a nickname with my father in-law.  Horrible Headwound Harry.  Today while racing with Cameron there was a collision and this was the resulting damage. 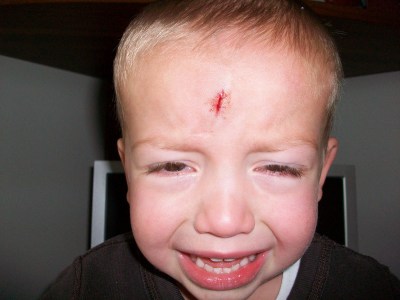 In retaliation against Cameron for his role in the tragic events, Eli refused to let him see the wound.  This must have been very satisfying because it drove Cameron absolutely crazy.  Although he hates the sight of blood, he still posesses that bit of human nature that compels us to look.  After about 45 minutes of secrecy it was getting difficult to accomplish small tasks with only his left hand available. 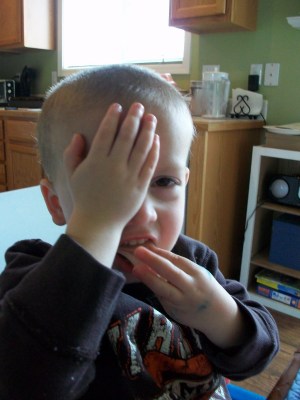 So for a brief moment he exposed the gash for Cameron’s curious gaze. 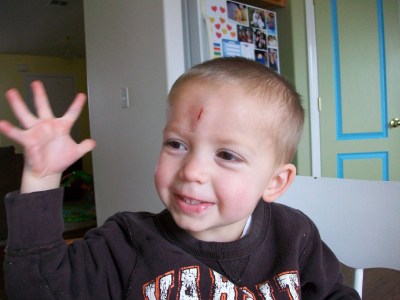 But it didn’t last long. Soon he was back to concealing the injury.
I love this picture though because it demonstrates something about Eli’s stubborn nature.  Very often he persists in doing something for so long he forgets where he began.  Nearly an hour after the incident he continues to put forth the effort to stand his ground but makes himself into a joke by neglecting his original purpose completely.

**It is worth noting that I am tremendously grateful that this injury wasn’t nearly as traumatic as it could have been.

3 thoughts on “a photo story about yet another Eli injury”