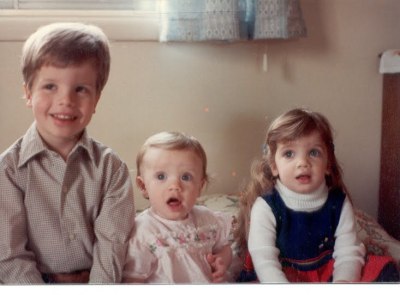 (That’s me in the center, a bit older than Miriam is now.)

Last night we found ourselves driving through my old neighborhood.  We had all the kids with us and due to circumstances too complicated for an explanation here, we ended up in the subdivision where I lived for approximately fourteen years of my life.

All the houses seemed smaller, and of course much older.   During those fourteen years we lived in two houses just around the corner from each other.  About a mile from those two houses was a house Richard lived in as a child.  We drove past it too.  Then we drove about another mile down the road to another house Richard lived in during his youth.  All four of these houses are within a couple miles from the two houses our parents currently live in, and we both lived in at various points in our lives.  We mused about this.  Six houses within three miles of eachother and we never met until college.

Because of the circumstances I referenced above, we were driving my dad’s Explorer.  (If you are reading this Dad, I’ll explain later.)  It is an older car, with only a casette player.  Richard popped in a mix tape of my dad’s.  The songs were popular tunes from years gone by, years where our lives were going on in the very houses we were slowly driving past.

Ahh fond memories.   I’ve said it many times, but I am a sentimental person and all this nostalgia was making me long for the simpler days of my childhood.  It made me miss the “village” that raised me.

On that note, I’ll check out for a few days to hopefully create fond memories for my own children.  We are spending a few days at a cabin in Cascade to let our children play with bark and leaves.