Friday was our last day in the city and so we were dedicated to getting the most out of it. We started at Ford’s Theatre, where Lincoln was shot, and then went across the street to the house where he died. I told Richard it was a sacred place for me.

(The Presidential box at Ford’s Theater where Lincoln was shot.)

Abraham Lincoln is my hero. As Bryan pointed out, he wasn’t born great. When he was born there wasn’t a huge monument for him. He was born ordinary. He became great through his own efforts, failures, accomplishments, circumstances and trials. I could say much about him, but it would be inadequate.

After that we made a quick stop at the National Archives to see the Constitution, Bill of Rights, and Declaration of Independence. We also were able to see a manuscript of the Magna Carta from 1297. That is so old.

We grabbed a quick lunch at a sandwhich place, once again recommended by Bryan, once again very tasty. Then we went to the Museum of Natural History. We did not spend much time in this museum because time was short, and because we were constantly saying to each other “The boys would LOVE this!”

We spent the majority of the afternoon in the Museum of American History. The original Star-Spangled Banner is now on display there, that was our favorite part. There is just so much to see. We could have spent the entire day in that one museum.

(View from Robert E. Lee’s home before the Civil War, in what is now Arlington National Cemetary.)

We left there in time to make a quick trip up to Arlington National Cemetary. We hoofed it up to the Tomb of the Unknown, at the top of the hill just in time for the changing of the gaurd. Talk about tender mercy… The hills of the cemetary are covered, as far as the eye can see, with simple white tombstones. It occurred to me that all the individuals buried there have more devotedly served their country than I have. It was very humbling.

We ended the day and the vacation with the all-American experience of baseball. Bryan surprised us with tickets to a Nationals game. The weather was perfect, the food was just as it should be at such an event. There were even fireworks afterward. The only downfall, the Nats couldn’t pull off a win. 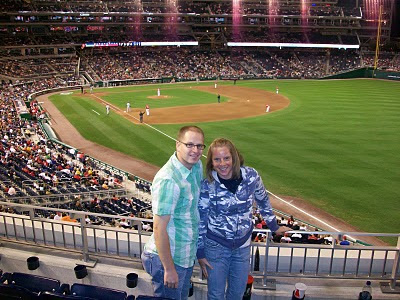