I entered the world of organized sports very reluctantly. I knew that it would forever change my life and it wasn’t a change I eagerly anticipated. But it seems that sports and extracurricular activities are part of raising a well-rounded child and Heaven knows how much we middle-classers want well-rounded children!

I’m still struggling with how to handle said activities and still eat dinner together as a family every night. But for now it’s just one child, one sport and I think I handled it okay. We were lucky that Cameron’s coach lives down the street and took Cameron to practices twice a week. Richard would meet him there and bring him home. I have no regrets- it was a great chance for fatherly involvement and Cameron thrived in the athletic environment. Take note that I didn’t say he excelled. He played well, but he enjoyed every minute.

My only complaint was that even though the season extended into October there was only one game where the temperature was below 88 degrees. In the beginning at the games when we were all perspiring the parents joked about how by the end of the season we’d be in our coats and beanies. Not so. Not in 2011. 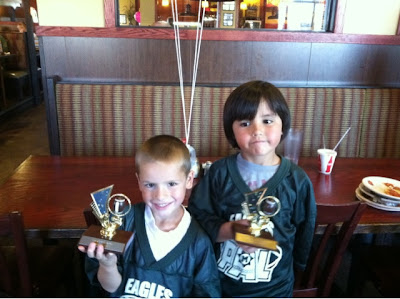 Cameron and his buddy Marcello- whose dad was the coach. 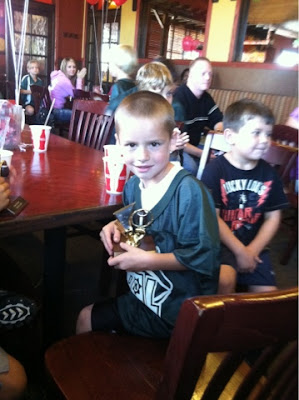