At Miriam’s three year well-child exam the Dr. asked about her disposition.  I used the drawing paper as a representation of Miriam’s disposition. 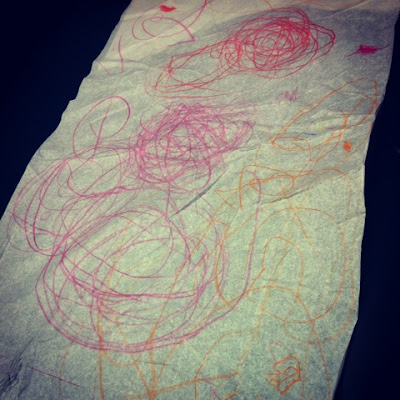 “She colored this in the 30 seconds after the nurse left and before you came in.”
When I try to describe Miriam and Simon’s mischievous dispositions to other people, my mind always draws a blank.  So I decided to start keeping a log.  These…disruptions… individually would just be an inconvenience, but collectively they test my sanity.  They are incidents that Cameron and Eli either never did, or did so rarely that it was still cute.
Miriam found a kitchen rag in a pile of unfolded laundry and got it soaking wet, then took the dripping rag and “washed” everything in site.  She did this the night before too, only it was a dirty rag she had found on the floor in the laundry room and she laid it, soaking wet on the living room carpet, only to be discovered after she went to bed and I was doing my nightly “pick-up-everything” ritual.
This also reminds me of the time Miriam got her hands on the Windex and sprayed every last drop of what remained in the bottle, all over the furniture, bedding, and walls of her bedroom.
When I fail to shower before the kids are out of bed I’ve found it to be safest to keep Simon in the bathroom with me. Today while I showered he took the 16 or so rolls of toilet paper and stacked them in towers around the bathroom.
As I type this Simon is trying to pluck the few fine hairs on the top of my foot. (Don’t tell me you don’t have hair on your feet.  We’ve all got a little Hobbit in us, right?)
Three times in two days Simon emptied the contents of an old Crystal Light canister, which contains 1000 plastic hair elastics.  And Miriam made a “snow angel” in them.
They frequently remove all the dvds from the armoire, dump the laundry out of all the hampers to use them as cars/boats/planes, and pull all the clothes off of Miriam’s hangers. (Hers being the only hangers within their reach.)
Don’t they sound horribly devious?! 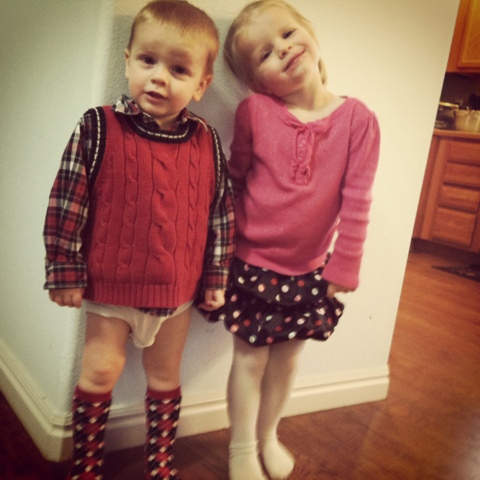 It is part of their daily ritual to yank all the books off of the shelves of Cameron and Eli’s bookcase. And sometimes in desperation I lock them in their bedroom while I cook dinner, always to discover that they have pulled every wipe out of the container and scattered them around the room. 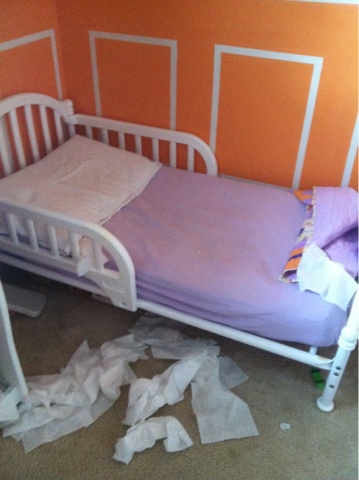 These things occur too rapidly and too frequently for me to remember everything I ought to do to prevent them.  But go ahead and call me a glutton for punishment because, really, some are so easily preventable.
Like Simon climbing in the bathtub fully clothed.  Or Miriam putting every lotion or cream in Simon’s hair.

And I’m still too devastated to say much about the giant gouge in my freshly stained table surface.
But I’m on a roll here…
There was the time Simon took the lid off the dog food bucket and tossed it with reckless abandon around the kitchen.  (While stuffing a kibble or bit into his own mouth.)  No drink on the coffee table goes unspilled.  No cereal box undumped.
Where am I failing as a mother?
Miriam loves to take one bite of each apple or pear and leave them unfinished in the fruit bowl.  And just days after her birthday she decided to make her new dollhouse “pretty” and colored it all with purple and green marker. 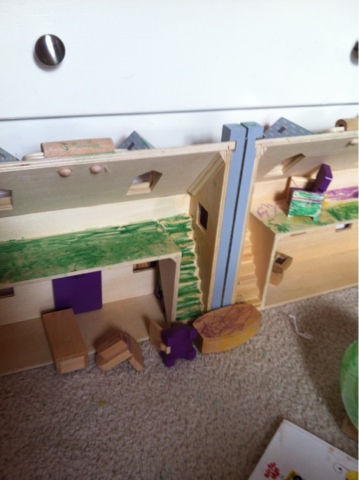 And one of the greatest mysteries of all around here, is how one of the pair got the tv remote inside the piano, and how I managed to understand/believe that it was actually in there when the only evidence was Simon’s dimpled finger pointing at the piano. 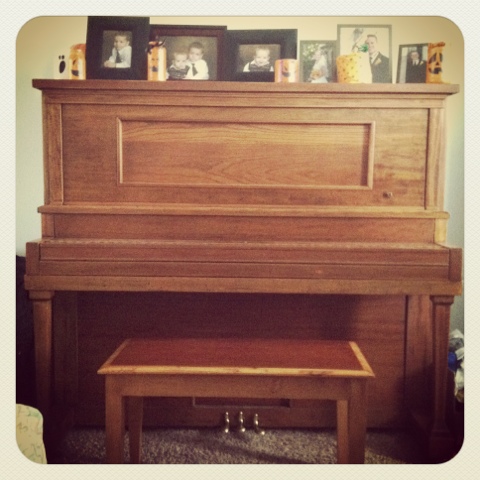 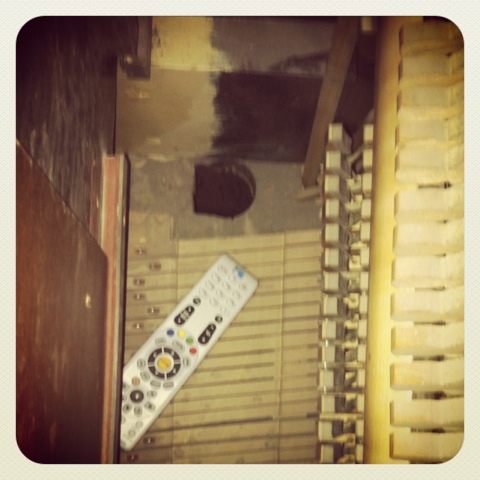 And of course there are just the everyday messes, one of which involved putting all the toys in the crib, and my discovering it only as I’m trying to put the sleepy child in bed. 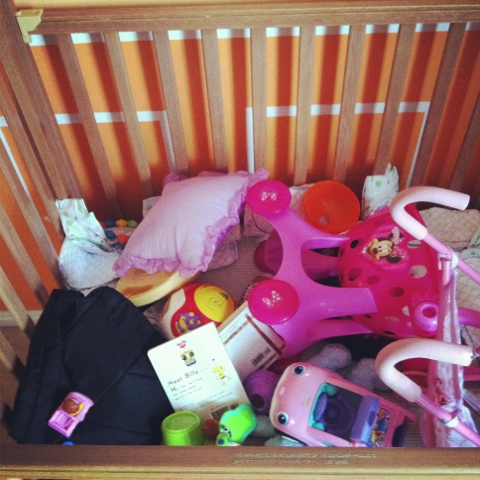 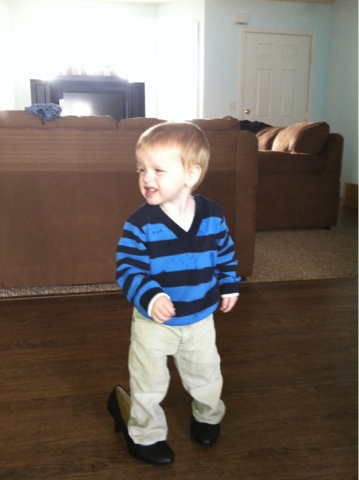 And the somewhat adorable venture, of Miriam and Simon each putting on a pair of my shoes in my closet, marching them down the hallway as if walking the runway, and then returning to the closet for a new pair, leaving the last pair on the living room floor.
And the not-so-adorable time Simon took a bite out of Richard’s deodorant… 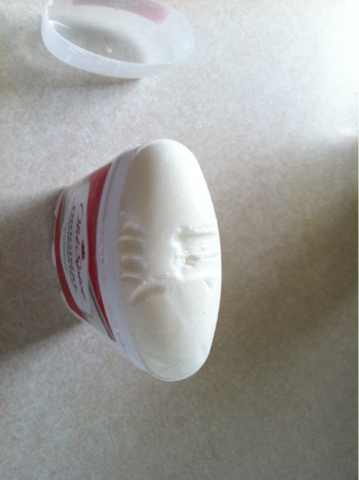 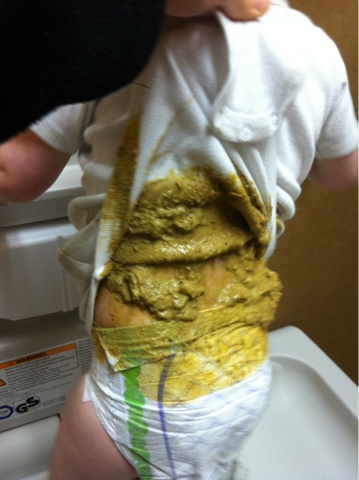 And then nauseating blow-outs like this.  At Chik Fil A.
(Sorry, that one deserved a warning. I only took the picture to text to Richard to elicit sympathy. And now I do the same here: the other three children were unsupervised in the play-place. I had only wipes to work with, and naturally, only a few at that. I ended up tearing the onesie off with my bare hands – I attribute that to sheer adrenaline- and throwing it in the garbage.)
I’ve been feeling so baby hungry lately.  I ache for a newborn.  And then I wrote this blog post.  And I realized that I might need therapy if I tried having another child.  Forget that, I need therapy as it is.