This was actually my second Ragnar, and I loved my first Ragnar as much as I loved this one. I just blogged about this one first because I’m going backwards and this one is the freshest in my memory. Maybe it will help rekindle Ragnar Las Vegas memories…
*****************

Years ago I met my friend Molly on an online forum on CafeMom.  It seemed like we had everything in common and we started emailing. Then we started texting. And then phone calls.

When Molly’s Ragnar team needed some runners she asked me if I’d be interested and then we roped in our friend Jeni. (Who we also met online.)  Erica and Josh were Molly’s friends, and part of the original team, but at the last minute Josh’s friend bailed so we recruited Chantel who was already in Utah.  (And a marathoner!)
It’s hard to explain virtual friends.  And how and why they became “real” friends.  And how something about that transition has made a friendship that is totally honest, real, and vulnerable.  Maybe because I had nothing to lose?  Maybe because there were no expectations about what kind of person I was “supposed” to be? Maybe because Jeni and Molly are naturally open and forthcoming. But with Jeni and Molly I have no inhibitions.  I had also spent a lot of time reading Chantel’s blog, and she had worked with Richard briefly during an internship. We had emailed too and our “virtual” friendship became real and meaningful quickly. I now consider them among my most loyal and dearest friends.  They don’t know my family much at all, and we’ve never even lived in the same city.  But we have long, in depth conversations about everything from politics to faith, marriage, childhood, parenthood and emotional health.  These women were answers to prayers and friends I didn’t know I needed.
Anyway-
Spending a weekend in a minivan is to a friendship like wind is to a flame. It strengthens the strong and extinguishes the weak. Or something like that…
I LOVE Ragnar races.  I really love them.  I love getting to know people in intense emotional situations. (Can you say crazy adrenaline highs, total emotional meltdowns, sheer exhaustion, and ravenous hunger irritablity?) There is so much solidarity. SO much authenticity.  No pretense.  I had the time of my life.
So as it turned out our team was five females and then Josh. Josh has to be one of the most kind, chivalrous and patient men I’ve met. 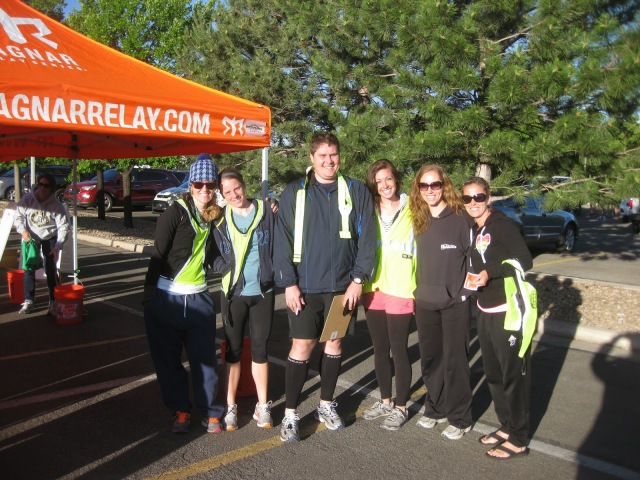 Bright and early Ragnar morn.  From Left to right- Jeni, Jo, Josh, Chantel, Molly, Erica. We were Van 1- so we kicked it off. Erica ran first, she is an experienced Ragnarian and she is legit.  She is fierce and tough. but loyal and supportive.  No one cheered like Erica. See below. 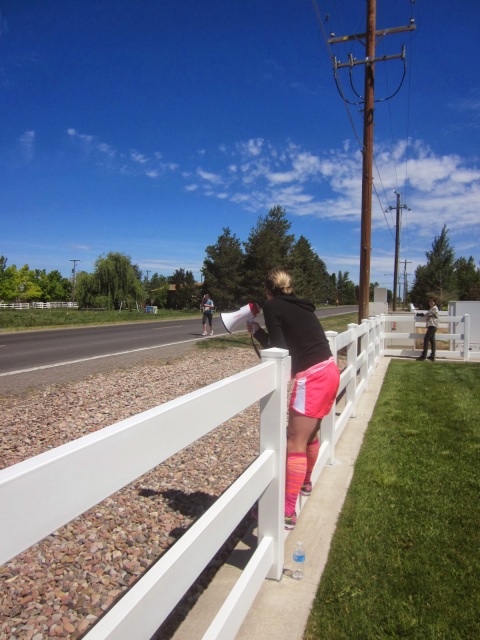 With Erica and the bull-horn, wherever we went we were the life of the party. (Like it or not. Which was sometimes not. Mood swings are status quo.)  But team support is the kind of thing that makes my throat get tight and sentimental tears start to fall.  Even after two exhausting days and 19 miles of running.

We got our new van just in time for Ragnar.  Despite my inability to operate it’s complex (not really) technology it suited us well.  Close proximity made for hilarious/intense/emotional conversations. And it only took a month and some major elbow grease to get off all the car paint.

The scenery was awesome.  The race went along the Wasatch Back, through small towns and farms and reservoirs and other things we couldn’t see because it was night.

The other team was all women, leaving Josh the lone man.  Unfortunately I didn’t get to meet them or know them very well.  But they had the toughest legs (pun intended)- so cheers for them! 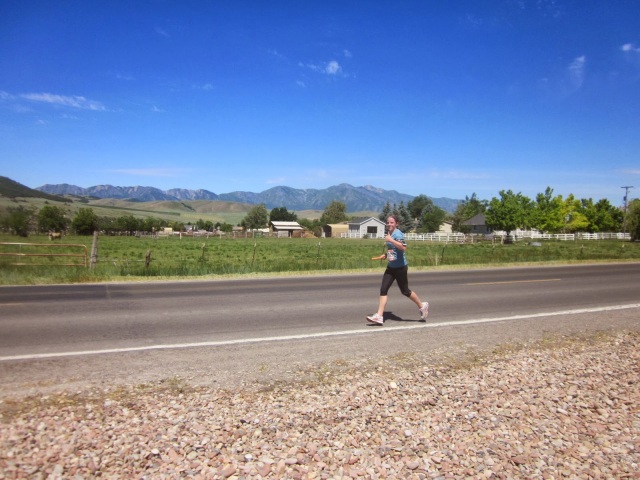 This was my first leg. It was my toughest, which didn’t make much sense because it was my shortest and it was flat.  But it was hot, and I think the elevation was really hard on me.  My second leg was okay, it was in the evening and also relatively flat.  My last leg was my longest, and had the most incline, but for some reason it was my best. I whined about it all weekend, leading up to it. I was super anxious about it and wondered what I had been thinking.  But maybe by then my body was adjusting to the elevation, and I knew it was my last leg so I could leave it all out on the table. I had major adrenaline surges that carried me through and I OWNED it.  If I do say so.  I injured my knee but didn’t realize that until a month later when I tried running again.  It was worth it though.  It was one of my best running moments of my running history. 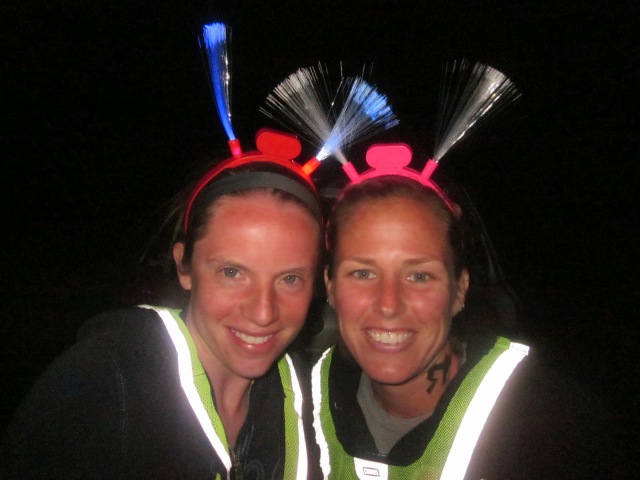 Chantel’s running style is a perfect model of her approach to life.  She is quietly confident, without guile, and so unassuming that those who encounter her can’t help but be totally impressed.  She is unquestionably competent and unbelievably gentle and compassionate to others. 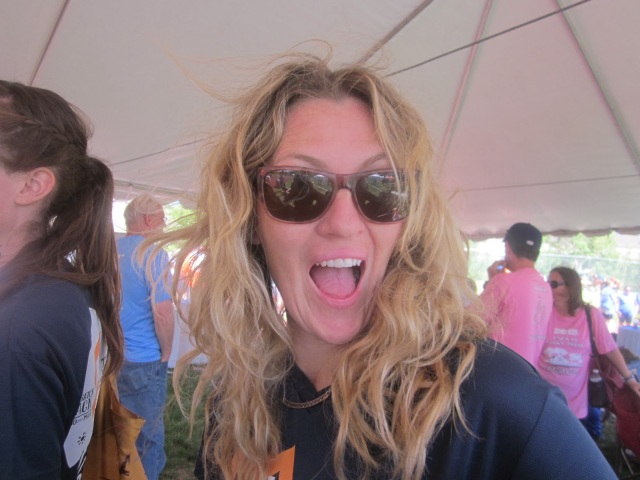 It also has to be said that Jeni ran this Ragnar just a couple years after being totally paralyzed from the waist down. After an emergency surgery she had the problem resolved, but running still requires serious strength, and a deliberate and conscious effort to lift her left foot with each step. 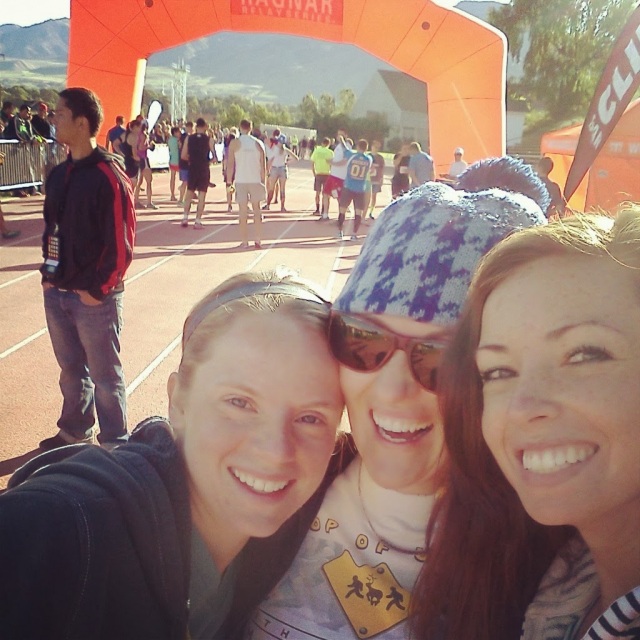 The whole gang in the van while I ran. What happens in the minivan stays in the minivan. Including iPod idol.  Google it though. And then play it. And then laugh REALLY hard at your friends. 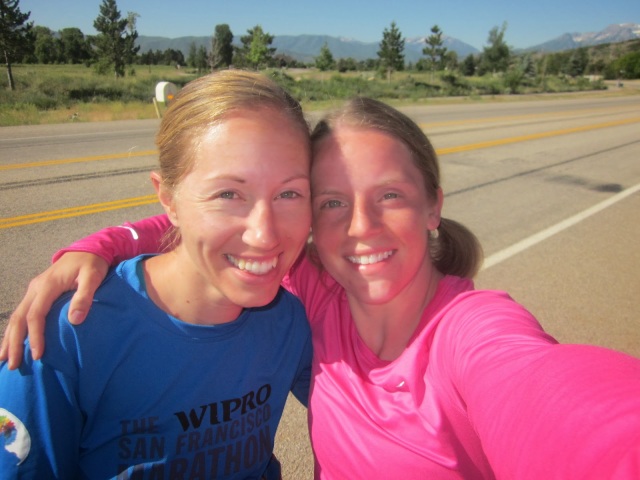 Molly was the glue that held our team together, the common link between us all.  The diplomat and decision maker and sense of humor initiator.  She never lets me take myself too seriously and isn’t afraid to call anyone out on obnoxious behavior.  And since this blog post apparently turned into a brag-fest about my Ragnar teammates- Molly is employed at Stanford and humors me when I think I’m being intellectual.
If I’m being totally honest – which these friends would encourage me to be- I sometimes have doubts about God’s hand in my life. MY life. Jo Bird’s life.  How much does He really do for me personally? But when I think about the way I met these women and the way we became friends I know there was divine influence.  Love you guys so much.

One thought on “RAGNAR: Round 2 – Wasatch Back”