When we visited Dover Castle we let each of the kids pick something from the castle shop. Miriam chose a crown, but she had to have this British Flag too. The Union Jack is now her constant companion. All the kids loved the way the sunshine made blue and red patterns on the pavement. Just a little trivia- when we moved here there were English flags flying everywhere for the World Cup, but they were just white with a red cross. We were so confused until we did a little research and discovered that the flag of Great Britain is a hybrid of the English and Scottish flags, with the “Cross of Saint Patrick” superimposed to represent Northern Ireland.
On Sunday at church I met a guy named Tim Farmer, who had brought his three kids to church but it was a long walk and so his pregnant wife, Mindy stayed home.  Desperate for a playdate I gave him my phone number and Mindy called me Monday morning.  They are Americans here for six weeks, having just spent four weeks in Banbury, and four weeks in France.

We made arrangements to meet up on Wednesday morning and take the bus to a new park.  They came down to Lewisham on a bus, then we got on a different bus together and rode to Hilly Fields park.  We were there for over four hours, which is a testament to mine and my children’s need for social activity I suppose.

Mindy was a delight to talk to.  I think we covered everything from religion to politics, parenthood, living abroad, our families, our passions and nothing in any superficial way.  The time went by so quickly and I thoroughly enjoyed myself.  I only wish she and her family were staying longer!

Some of the buses are double-decker buses and some are not, and the kids always sigh with disappointment when our bus isn’t.

Some of the playground equipment is a little dated, but kids don’t discriminate. There was this old train and then a structure resembling a pirate ship.

The yellow and blue poles on the other side of the fence are actually adult exercise equipment. Many parks have them and it’s kind of fun watching how people use them. The parks are all so big that there are usually people jogging along the pathways and then they finish up with some pull-ups and such.

It was a really warm day for London. (Almost 80 degrees Farenheit.)  Luckily Mindy and I found plenty of shade and we took a break for ice cream cones with sprinkles and a cold soda for the way home.  The British seem to love flavored water, and they love sparkling water, and they love flavored sparkling water, and so do I!  There are these Italian San Pellegrino citrus (aranciata and limonata) flavored sodas that are soooo good. 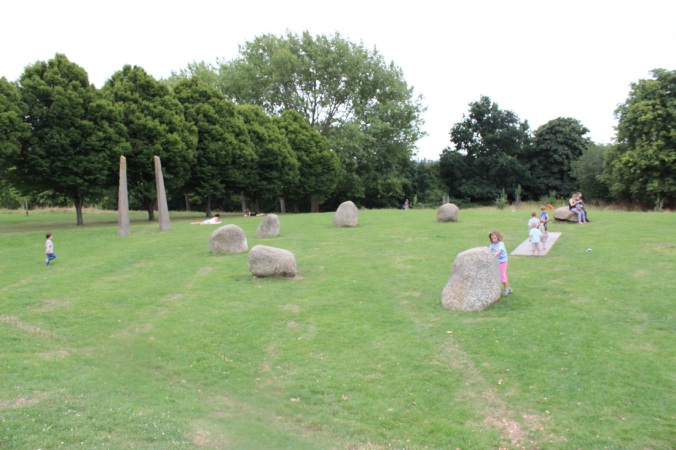 These 12 stones were put here as a monument to the new millennium. I guess. I just assume there is meaning or purpose behind everything here. Or they are just big rocks for climbing on. 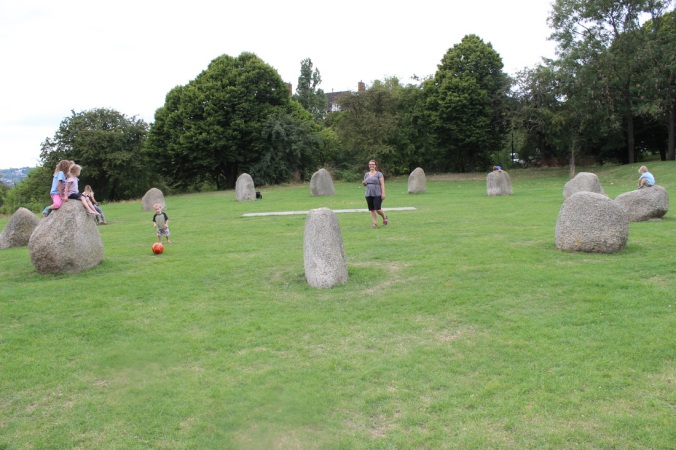 That’s my new friend Mindy in the middle. She is expecting #4 in few months. Three boys and one girl just like us.

After school got out the park was flooded with kids and Cameron found a group of boys playing football.  He asked me if he could play with them and I told that was fine with me but he would have to ask the kids.  I was so proud of him for having the courage to do it.  He said they were all nice to him and asked him where he was from and what his name was.  He played with them for a long time and I think it made his day.  He even scored a goal! 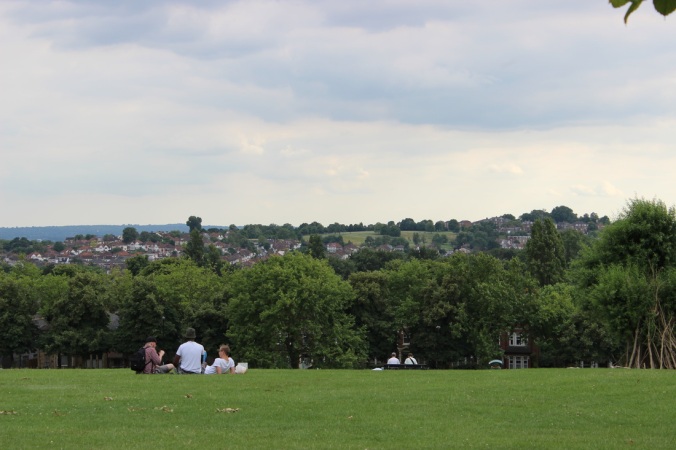 And a nice shot of a nice view, and that’s a wrap!

One thought on “Hilly Fields Park ”