A cute little selfie as we went out the door, when we were both cheerful and excited, before the morning went “pear shaped” as our agent Jo liked to say.
Yesterday.  Oh yesterday.  One of my favorite posts on the blog Momastery is when Glennon writes about that moment when her husband comes home from work and asks “How was your day?” And she thinks – “My day was a lifetime.”

Yesterday was a lifetime.

It began with Miriam and I getting dressed up, me trying to look older and responsible and Miriam not trying at all but looking adorable, to go to her Reception Induction.  I think those are just fancy words for kindergarten orientation.   The event began at 9:45 but I decided to leave early so I could ask some questions and return some paperwork before it began.

Google maps told me it would take eight minutes to get to the school.  We left the house at 9:10.  We arrived at the school, me feeling totally irresponsible, at 10:20.

It took me an hour and ten minutes to make an eight minute drive.  I’ll summarize it like this.  I got lost.  So I turned around and came back to our street to start over but I got lost again.  My navigation on my mobile wouldn’t work because I have poor data coverage.  I was afraid to call Richard because that’s illegal and I can barely drive let alone talk and drive.  I began to feel helpless and alone.  I started to cry. I asked for directions and the stranger could see I was so upset that he suggested he drive me there instead.  I insisted I was capable.  Even though people were honking at me and giving me dirty looks.  Eventually I called Richard with the handsfree/bluetooth and he talked me through it.

But it was that moment.  THAT moment.  The one I’ve been dreading. The moment when I asked myself

There was more to it (or at least in the drama of the moment it felt that way) than what I’ve written but this summary will suffice.

Eventually we made it to the school and everyone at the school was very kind.  They could see I was upset and they were accommodating and went out of their way to be helpful.  At one point a woman started talking to me and she asked how my morning had been and I told her everything, opening my soul to this stranger.  She listened patiently and then I had the presence of mind to ask her about HER morning.  Did she have a child entering reception?

“No actually I’m the Head Master of the school.”

Gulp.  I just word vomited to the “principle” of my children’s new school.  Thank heaven’s the woman was not the least bit pretentious and remained my companion for the duration of our visit to the school.  I’ll write more about the school next week, Cameron and Eli have their induction on Monday.  But everything got better after we made it to the school.

Lucas Vale Primary School. It is located near Deptford and on a good day should only be a ten minute drive.

The gates to the school. It appears that they mean business with their security.

Miriam’s PE uniform. All ages do PE and they all have to wear this cute little uniform. I guess they notify me which day is PE and I send her clothes with her. Changing in the locker room came early for my kids I guess. 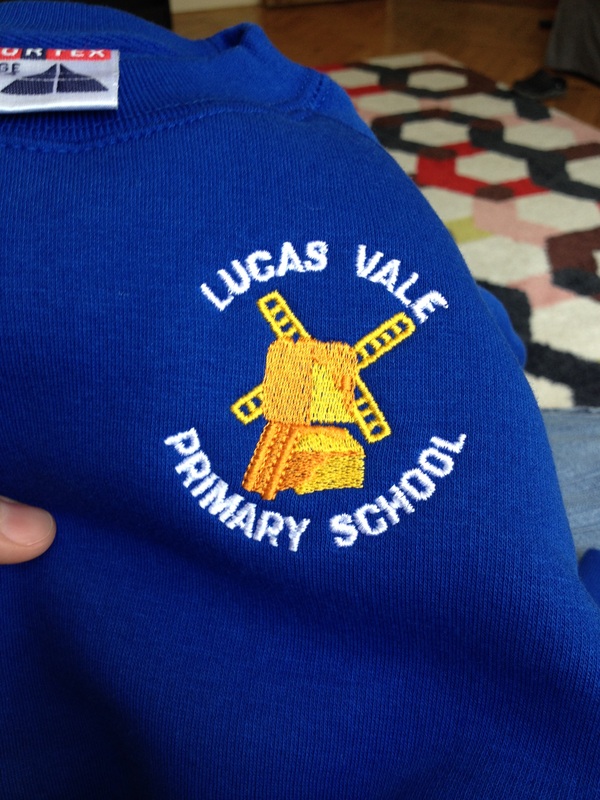 I’ll write more about uniforms when I understand them better, but I did learn that they have to wear these “jumpers” (sweatshirts) every morning to school. It’s like their ticket in the gate I guess.
Richard had stayed home with the other kids, so as soon as we came back and he left for work I put everyone down for a nap/quiet time and I took a nap myself.  I needed to escape reality a little bit and recover from the trauma of the morning.

I promised the kids that if they were good during quiet time we would go back to the library.  I only let them pick three books last time because I had to carry them all, and three books apparently didn’t last long.  So this time I was more prepared and had them bring their backpacks. 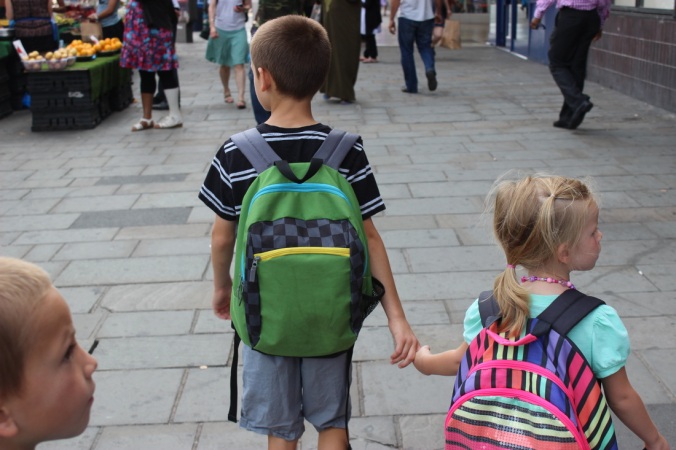 We have to use the buddy system during crowded times of day.

The library check out system rocked. my. world. You lay your books on the glass table and the computer recognizes them and the titles show up on the screen. They must all have some kind of chip because you can stack 8-10 books on there and it will read them all. Then you scan your card and it prints a receipt and you are on your way.

The kids each get their own library card, and kids don’t get any fines if their books are late. And “Master Simon”, how cute is that?! English etiquette is that men in society (adults) be addressed as Mister, and young boys are Master.

The Lewisham high street has a street market every day.  The setup their tents and tables every single day.  And they usually close down by 6:00pm.  There are produce stands, clothing, luggage, kitchen supplies, flowers, bakeries, and other goods.  The fruit and veggie stands fill metal bowls and sell the contents of the bowl for £1.  That is so cheap! They vendors shout to the crowd “One bowl one pound!” Or “One scoop one pound!”

I know that a pound and a dollar are not equal on the exchange, but Richard gets paid in pounds so for the sake of simplicity just consider that what is worth a dollar there, is worth a pound here.  (As evidenced by stores like Poundland and All a Pound = Dollar store.)

At the end of the day they sell two bowls/scoops for £1.50.  The price and convenience are hard to beat.  We are a five minute walk from any fruit or vegetable I want for breakfast/lunch/dinner.

When we got home the kids read their books while I made dinner, and then Richard left for a meeting and I put on a movie for the kids.  While I was washing the dishes I just felt overwhelmed with gratitude and happiness.  Our life here is complicated in a lot of ways, but simplified in a lot of ways too.  And now that we are finding a bit of a routine I just feel really happy where we are.  Which was a far cry from the way I felt that morning.