It hadn’t occurred to me that there would be outdoor swimming pools in London.  It doesn’t get above 80 degrees for more than a couple weeks of the year, and I just assumed they wouldn’t exist.   Then a friend of mine told me about an article she read about places to swim in London and lo and behold- the LIDO!

What a is a lido? It’s a name for an outdoor public swimming place.  It can be a beach or a pool, and lidos were wildly popular in the 1930’s.  There is one in London that was built as early as 1906, but I guess public swimming didn’t quite come into it’s own until the 20’s and 30’s.  I also discovered that many of them are referred to as “art deco” lidos because of the decorating style during that time period.  I found myself daydreaming about being a flapper in a stylish swimming costume with a fancy cap on.  (Side note- they still call swimsuits “costumes” here.  A parent told me that Cameron would need one for PE at school.)

Anyway, once I discovered they existed I had to go to one! Friday was on track to be the hottest day of the summer so I found the closest one, Brockwell Lido near Dulwich.

When we had narrowed down our house choice to two, it was our house and one in East Duwich.  Dulwich is charming.  It is quaint and picturesque, quiet and leafy green.  The shops are classy and well-kept and the park, ohhhhhh the park.  We obviously didn’t choose that house, but Dulwich has a special place in my heart and I plan to spend a lot of time there.

We took the bus, which was hot and long.  It has been unbearably humid the last week or so.  At first I didn’t understand why every time I sat down my clothing felt damp, and why all the paper in our house felt flimsy and wet.  Cameron gets so sweaty all the time, doing his active Cameron-ish things like imaginary football and real football.

By the time we arrived we were all ready for a dive into the cool waters, but apparently we weren’t the only brilliant folks to think of swimming on a hot day and the queue was daunting.  Fortunately we were in line behind a couple Americans.  A father, Paul, and his son who has lived in London for 11 years.  (I never caught his name.)  Paul was so great with the kids.  He took them to sit in the shade, told them jokes, and listened to their jokes (the REAL kindness) while I chatted with his son, and eventually our conversation included the woman behind us.  The son has a girlfriend who is due in a few weeks with their first child and they are moving to her home in Brazil, and the woman behind me in line was from Brazil, the daughter of a Brazilian and Greek.  It was such a fascinating conversation, that despite the heat I was perfectly content to just absorb everything I was hearing while my children were entertained by the soon-to-be grandpa.

East Dulwich – the most charming village in London.

Mim got a new swimsuit/costume because as I was searching for hers high and low, she sweetly informed me that she had “hidden” it at our apartment because Simon was stretching it.
It took nearly an hour to get into the Lido and by the time we did the kids were so friendly with Paul they were begging him to swim with them.  The son wanted to do laps so he went on his way and Paul swam with the kids for a bit before going to swim some laps of his own.

Okay, so maybe I’m a spoiled American, with our amazing water parks and public pools that are children-friendly.  But I didn’t really see what all the fuss was about.  There was one, massive 50 metre pool and it was jam packed.  The only swimming Mim and Si could do was jumping into the water, me catching them and returning them to the edge.  The cool water definitely felt good, and Cameron and Eli had a good time retrieving pound coins that I tossed to the bottom of the pool, but otherwise we found much to be desired.

Paul offered to take a picture for us. Simon is in there somewhere. And that is Pauls’ son, the speedo photo-bomber. 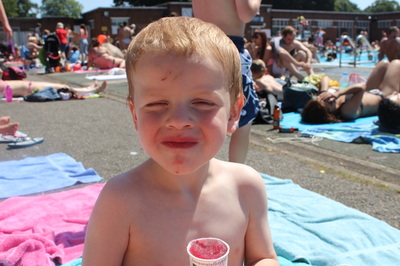 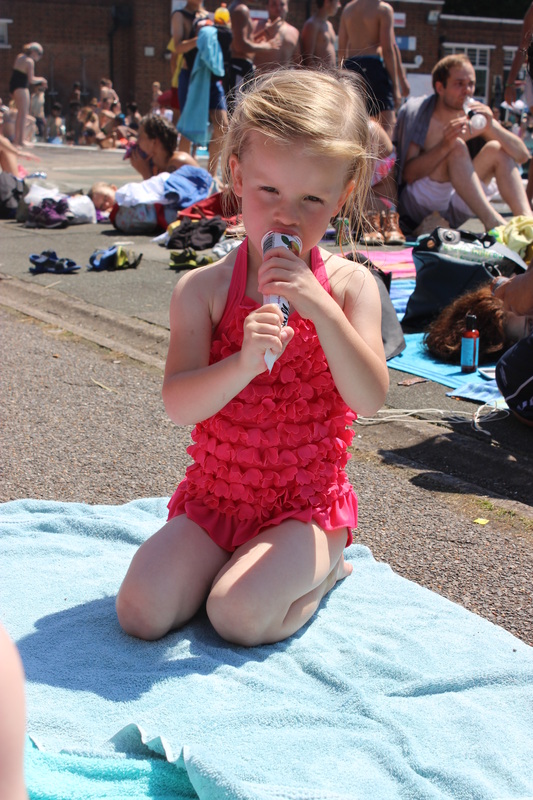 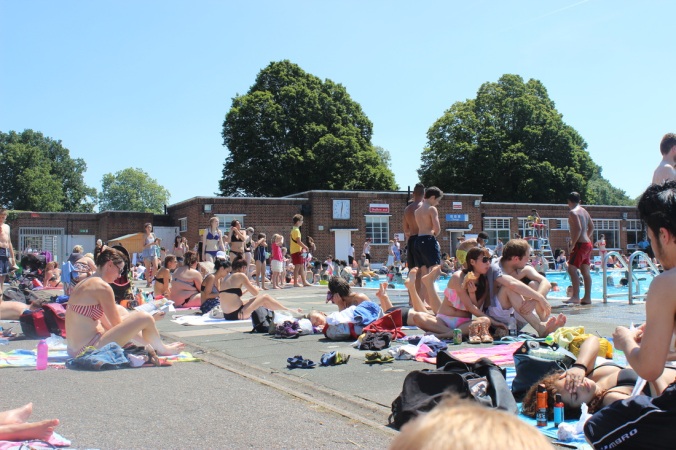 We’re not in Idaho anymore as far as swimsuits go.  It’s not like none of us have ever seen a string bikini, but none of us had ever seen a thong bikini.  Cameron cracked up laughing when he saw the full visage of a large, black behind – which necessitated a conversation on the bus ride home about seeing people, especially women, as more than just their body and also not making jokes about bodies.

It was so busy and the kids were a little intimidated by the crowds so we only stayed for a couple hours.

The bus ride home was brutally hot and miserable.  The kids were all exhausted and I spent several minutes trying to decide if it was worth the trouble.  But it was a nice way to spend a hot afternoon all in all and I think we will check out a few more lidos before the summer is over.

Some of the lidos are heated but this one wasn’t so the kids spent a fair amount of time getting their shivers out on their towells. 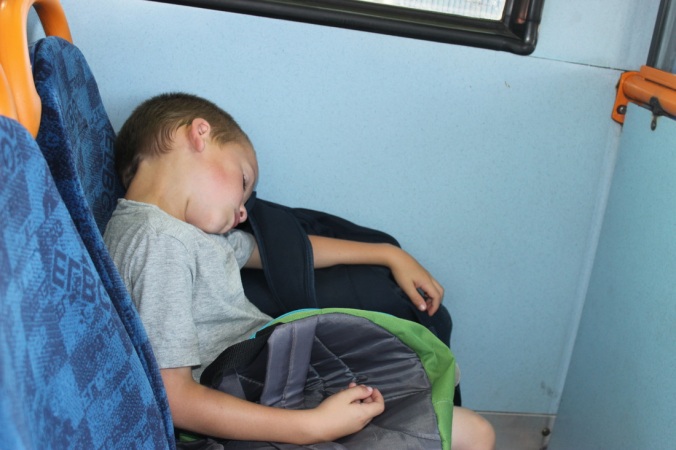 Eli conked out on the bus home.

Simon sound asleep on my lap, making me feel even more hot and claustrophobic. You can see Mim’s hair on his shirt, she was asleep on top of him but the angle was too tricky for a picture. 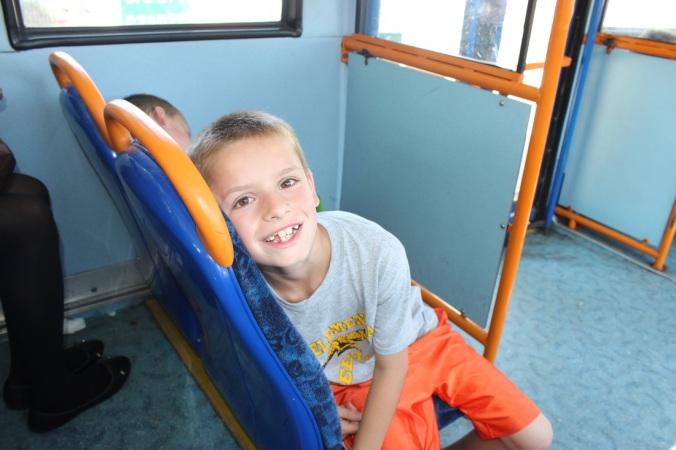 Cameron was the only one who didn’t crash, which made our aforementioned conversation possible. Thankfully everyone around us had headphones in.