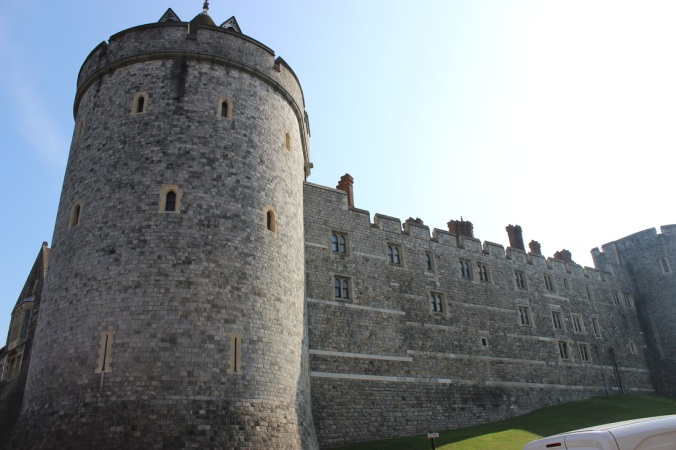 My mom and I really wanted to visit Windsor Castle but after looking a dozen diffferent train routes and bus/train combos we couldn’t find anything that was an easy trip.  Train transfers are hard with kids, and we knew we would be doing a lot of walking at the castle and didn’t want to drag the stroller around etc.  So I decided I would attempt to drive there- buckle up the littles and just sit our behinds in one seat the whole way.  (These are the things I took for granted in the States.) We studied the maps, my mom wrote out the directions in case my phone died or Siri failed us and we did it! We made it all the way to Windsor without getting lost, and just a had a little trouble finding the castle and parking.  In fact it was a really fun drive through the southwest parts of the city and along the Thames.

We got there just in time to watch the procession of Her Majesty’s royal band marching into the castle for the changing of the guard. 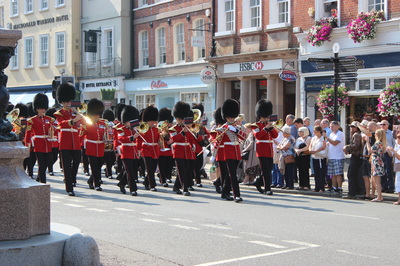 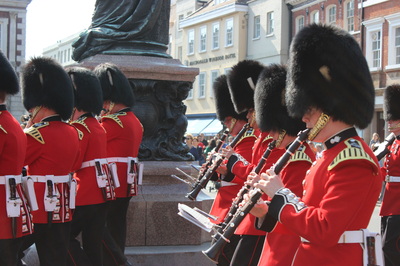 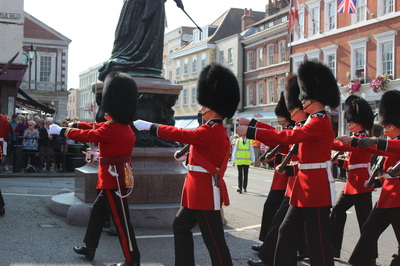 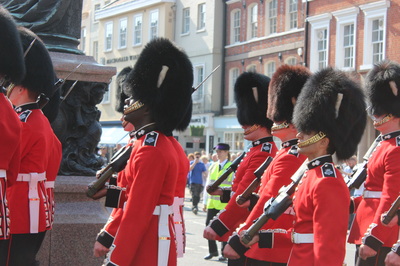 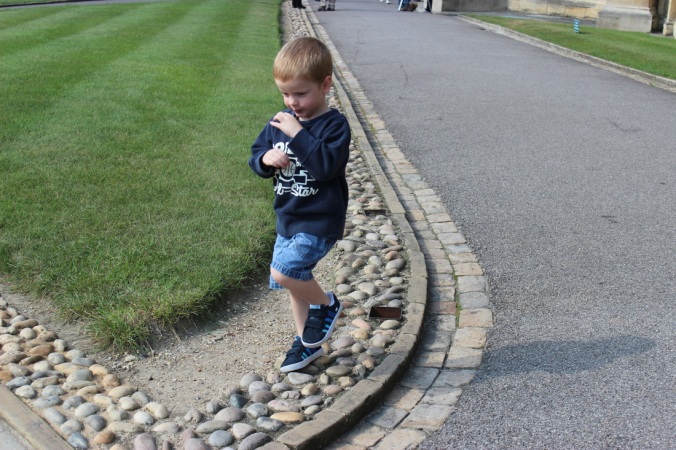 Simon loved the soldiers and loved pretending to march about with his “trumpet” (which seems to resemble more of a clarinet but whatev.) 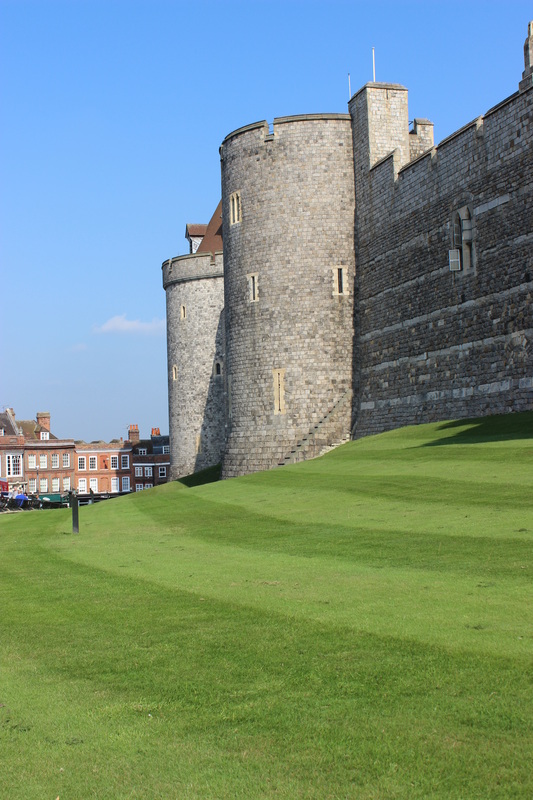 Queen Elizabeth spends weekends and some holidays at Windsor Castle, and it is also used for state events and special occasions.  One of the wardens told us that when she comes she rides her horse around the golf course every day, rain or shine and she refuses to wear a helmet.

It’s in such a beautiful place.  At the back of the castle grounds is the town of Windsor, and on the Northwest it faces the countryside with beautiful views and gardens.  WIndsor Castle is the longest occupied castle in Europe and currently over 500 people live and/or work there. 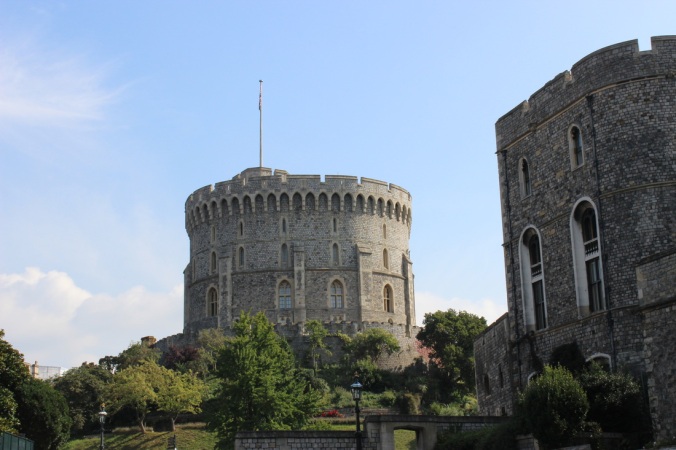 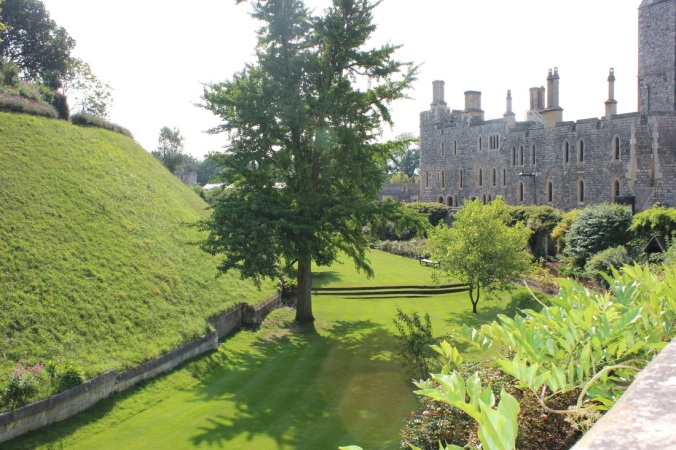 The former moat, which is now just a lovely garden. 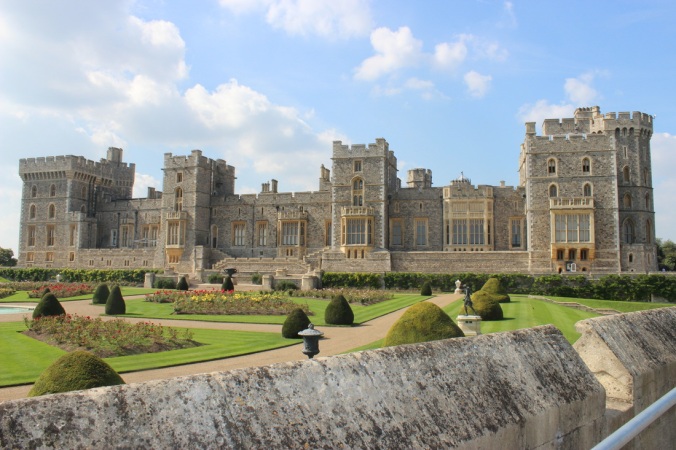 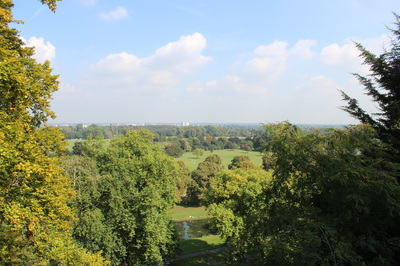 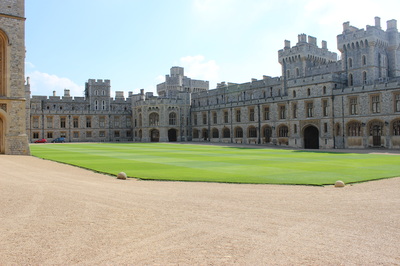 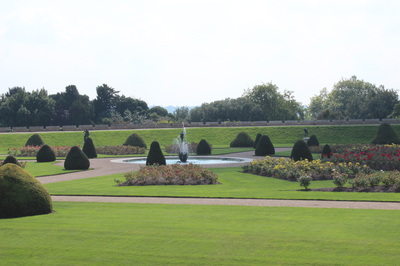 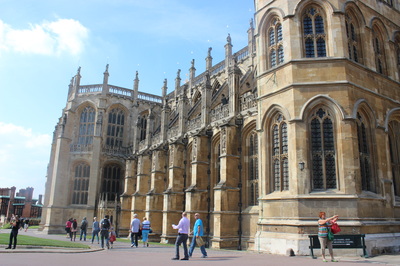 Photography wasn’t allowed in the State Rooms- which can’t adequately be described but I will quote art historian Hugh Roberts-  “a superb and unrivalled sequence of rooms”.
They were quite stunning, if you can get past the tremendous amount of wealth and resources that a practical brain like mine would prefer be spent in other ways.  Richard and I have talked often about royalty, and how we as Americans just can’t seem to get our heads around it.  The “American way” is to work hard and earn your success, and the idea of living somewhere like Windsor Castle just because of the family you were born into is just outside my cultural comfort zone.  But I do enjoy seeing castles and I do appreciate that they are open to the public to appreciate the artistry and architecture and design.

We also got the see Queen Mary’s doll house.  The doll house took up an entire room, and was equipped with actual electricity and running water.  It was exactly the kind of thing I dreamed of as a little girl and I can’t imagine the hours and hours of joy it must have offered.  Also on display were France and Marianne, two dolls that were a gift from the French government to Princess Elizabeth and her sister Margaret Rose.  The collection included an extensive wardrobe of clothing and accessories from famous French designers of the time.  Those dolls had more clothes and shoes and ribbons than I do. 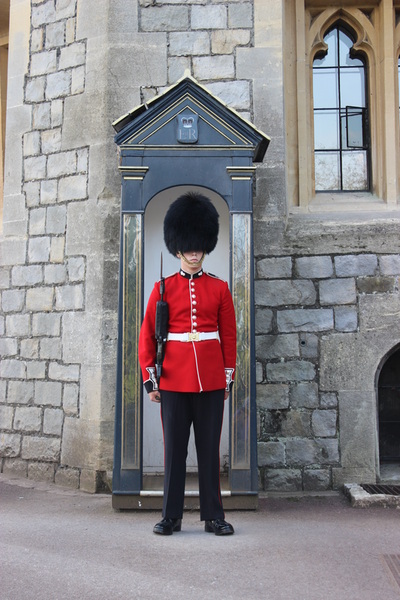 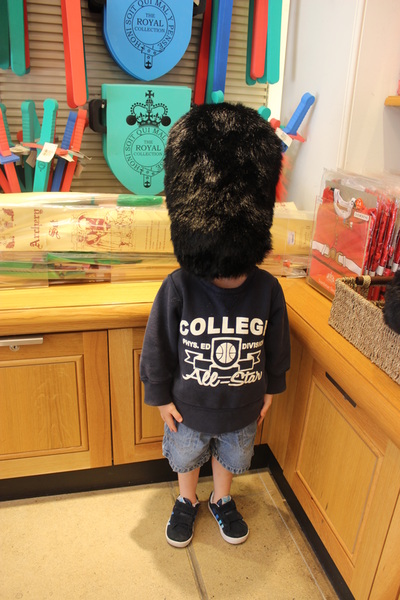 It was such a lovely day and we had a wonderful time at the castle.  After we left the castle grounds we did a little shopping and ice cream eating in the town of Windsor before tackling the drive home.  Things didn’t go quite so smoothly on our way back, but not because of driver error. The traffic was horrendous and fortunately Richard had planned to leave work early to pick up the boys from school in case we weren’t home in time.  And when you are stuck in stand-still traffic in a city like London it affords ample opportunity for people watching, which my mom and I did to our occasional great amusement.   Making the drive there or back was a good confidence booster for me behind the wheel, it was my first driving experience outside of Lewisham and I consider it a success!