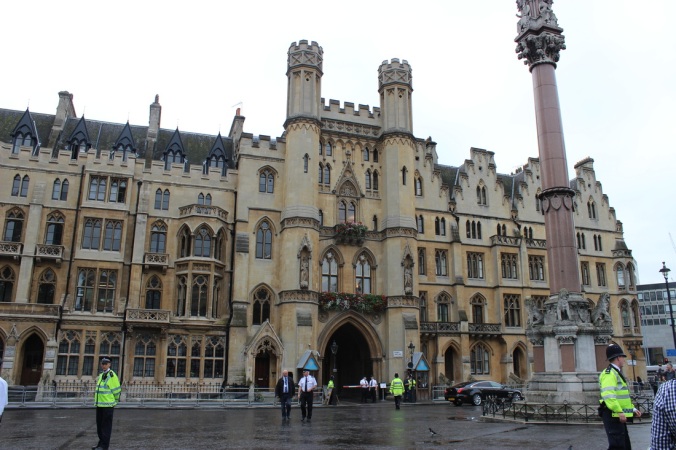 Westminster Abbey
Pressica, as we like to call them, were able to sign up for a European Tour as part of the BYU-I business college that happened to stop in London for a couple days.  They spent some of their time here doing business tours (BBC!) but we got to spend a day with them trying to cram in as much as possible.

I really love having visitors. It’s a nice taste of family and home, and we really like giving our family members a glimpse into our life here.  Everything is better when it’s shared, yeah?  So we were all counting down the days until they came.  And I also think Jess and Preston are super rad company because they are so adventurous and flexible.  Even though Preston wasn’t feeling his best, he was still such a trooper and we had a really great time.

They were having a special service that day for judges only. Its done annually and everyone was dying over their wigs and outfits.

Abraham Lincoln is a personal hero of mine. And millions of others obviously. But I was excited to see this statue for the first time.

You can’t get much more London than this- a double-decker bus in front of Big Ben. (I think I’ve already mentioned that Big Ben is actually a bell inside the clock tower, but I’m going to forever refer to the tower as Big Ben like an ignorant tourist.

I wonder how many shots I’ll accumulate of this beauty over the two years. Just so gorgeous… 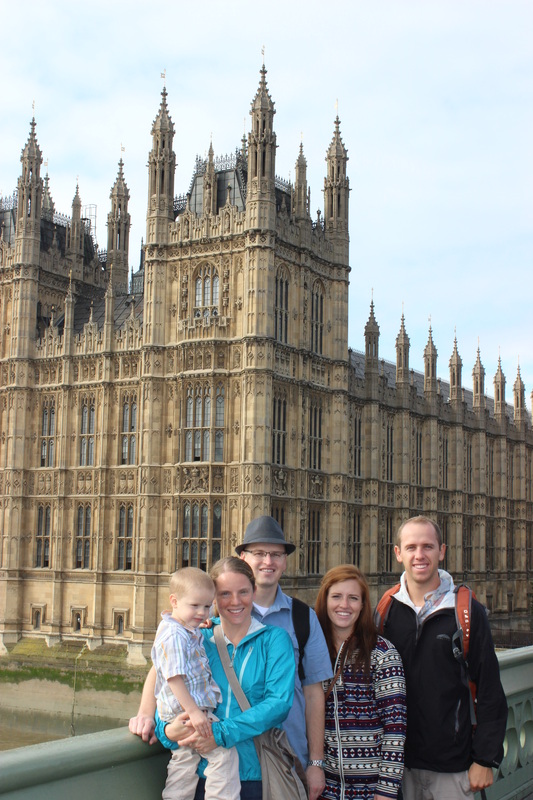 Our gang in front of the Houses of Parliament. It’s illegal to take kids out of school for “holiday” once they have reached the age of compulsory education, which Simon hasn’t. We brought him along to avoid the mid-day pick-up.

Awhile ago I came across the blog of a family who had lived in our ward in London from 2011-2013 I think, doing an international rotation with KPMG.  Tanya kept a blog of their experiences, and I’m so glad she did.  It has been of infinite value to me.  I reached out to her via email and she has been helpful to me in many other ways since.   So Tanya- if you ever read this, thank you thank you thank you! And I’m sorry if it feels like I copy all your fantastic ideas.

Anyway, Tanya talked about an old pub that they loved to take their visitors to for the authentic pub experience. So we found it in an obscure alley, and had fish n’ chips in the same rooms where the likes of Mark Twain, Alfred Tennyson, Sir Arthur Conan Doyle and Charles Dickens drank a pint. 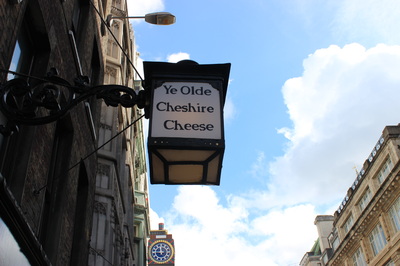 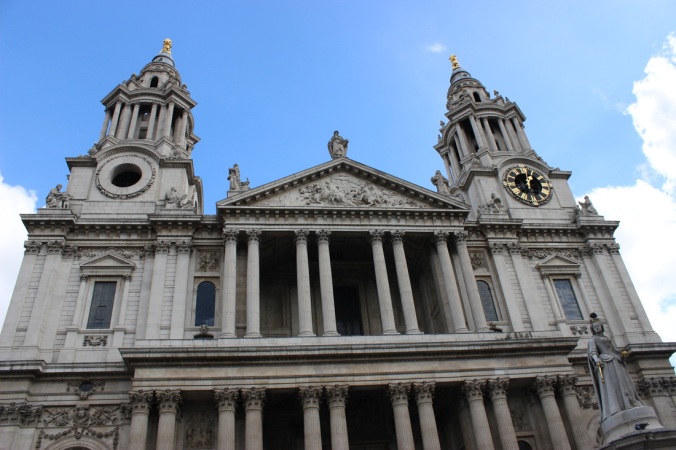 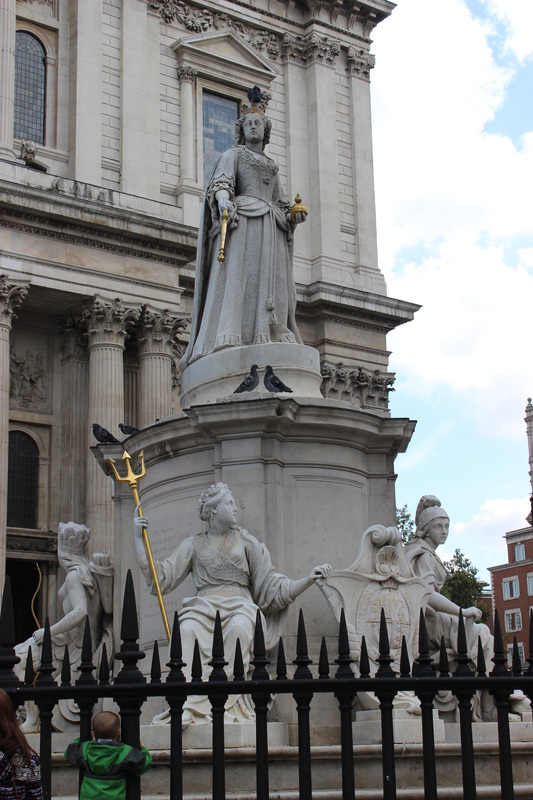 Queen Anne. That pigeon on her head has no respect.

A sculpture I loved. I wish I’d taken a picture of the name and artist. If I don’t take a picture I can never remember.

We walked through Picadilly Circus and on to Trafalgar Square where I bought our guests my favorite London treat – a Millionaire Bar, shortbread with a layer of caramel and topped with Belgian chocolate.  Cafe Nero makes the best ones and I’ll buy you one too if you come.

At this point Simon and I split off to go pick up the kids from school and Richard took Jesston to the Tower of London and Tower Bridge.  We all met up at Cutty Sark so we could eat dinner at Goddard’s, another English must.  Pie and mash with Blackcurrant cobbler for dessert.

Killing time, waiting for Richard and Pressica to meet up with us. This “thing” is a piece of machinery used to dig the tunnel that takes the DLR under the river and into Greenwich. 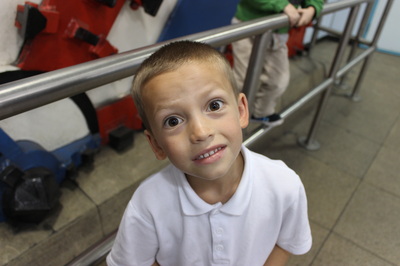 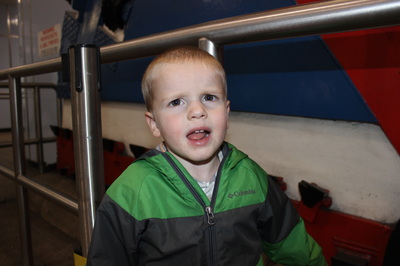 View of Canary Wharf from the National Observatory in the park. I’ve probably posted this same shot before.
After dinner we walked home through Greenwich park, which even on a cloudy day offers spectacular views and scenic fall foliage. 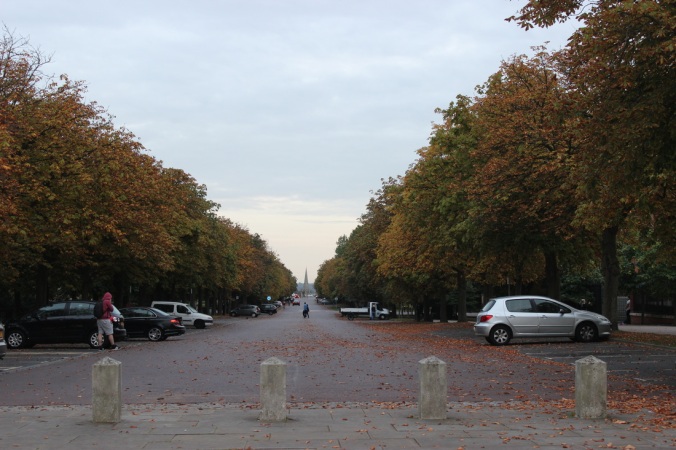 It was dark by the time we got back to our house, but the kids really wanted to show Jess and Preston where we live, their bedrooms, their toys, all that important kid stuff.  Then we said our good-byes and Richard rode the train back into the city with them.  It was such a fun day. I wish it could have been a whole week. In fact the next morning when I told Mim that they were on their way to Paris she cried for a good while.

Thanks so much Jess and Preston! I hope your European tour was phenomenal and I think its an experience you’ll never regret.  We love you so much.