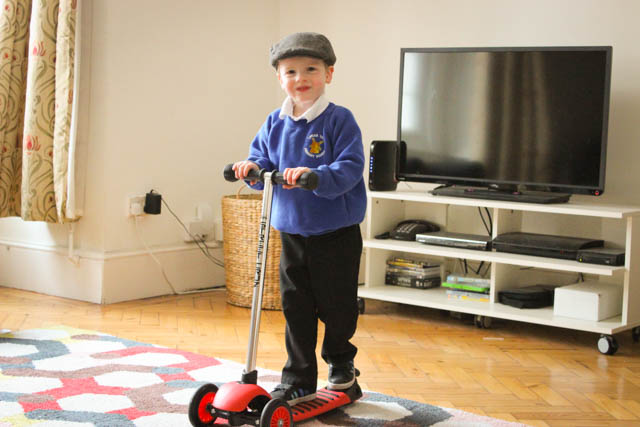 Simon’s immune system was not prepared for what London has thrown at him this winter. It seems he’s been sick more than he has been healthy.  Fortunately on his birthday he was feeling well enough to go to school because he was really excited about taking treats to his class.

We let him open his presents in the morning because I wanted him to be able to use his gift on his birthday.  He has been asking for a scooter for awhile, and he specifically requested red.  He was so excited about it when Richard brought it down.  He also got a book and a torch (flashlight) from Baca & Grandpa Hall.  I’m starting to really believe in this simplifying of birthdays/holidays.  One gift from us, one from his grandparents, and he was a perfectly happy boy.

Simon’s teachers at school aren’t always sure what he can eat and what he can’t eat, (it’s hard to know what treats have milk in them) so they usually just give him a piece of fruit instead.  He’s a good sport about it, but he was go glad that for his birthday he could bring a treat that he could eat too.

I asked Simon no less than a dozen times where he wanted to eat for his birthday dinner but he could never quite nail it down.  He would either say whatever restaurant his siblings whispered in his year, or McDonalds.  So I chose for him. a place called Giraffe in Blackheath.  It’s really kid friendly and has tasty food too.

After dinner we came home. ate the rest of the doughnuts and sang to our birthday boy. 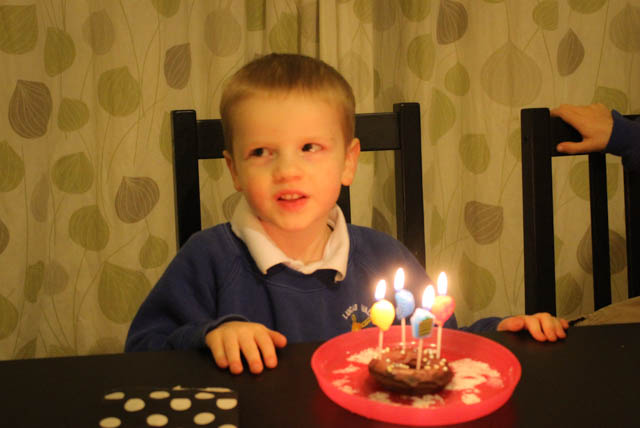 The Gruffalo is wildly popular here and Simon has jumped on the band wagon and become a huge Gruffalo fan. (I have as well, such a clever little mouse!) As a side note, I downloaded the audio versions of The Gruffalo and The Gruffalo’s Child and on our trip to Holland Simon listened to them over and over, following along with his board books.
A bit about Simon.

Simon is delightful 90% of the time, but the other 10% of the time it is clear he is the youngest.  I don’t hesitate to admit that the child is spoiled. How do you NOT spoil your youngest? I suppose we could have another baby, but at some point there has to be another way…

Simon is very honest and matter-of-fact about his mistakes and misbehavior, which is both endearing and infuriating.  He has a great sense of humor and loves to laugh at his older siblings’s jokes.  He hates to be alone, he doesn’t play well by himself, but he makes a great companion for me.  He is super adaptable to my whims and adventures, although he does also appreciate routine.  He loves to come home from school and eat a peanut butter and jelly sandwich and watch a cartoon.  His favorite cartoons are Fireman Sam and Team Umizoomi.  He loves sweets, almond “milky” and hot dogs.

He loves his scooter and for days begged me to take it everywhere with us, even in the car.  He has gotten really good at riding it and loves to take it to the parks and to pick up the kids from school.  He isn’t into sports so much, unless it’s the only way to get some attention from Cameron.

He still loves to snuggle with me, he loves Richard’s teasing and “Dad jokes” and he very nearly worships the ground Eli walks on.  He has a love/hate relationship with Mim that I think is typical of siblings closest in age, and he looks up to Cameron too, although they are far enough apart in age that they don’t have as much in common.

Simon has probably had the least trouble making the transition to London life, and in fact said the other day that he never wants to move back to the United States.  Eli asked

“You want to grow up and be a beefeater?” (British Guard)
“Yep!”

One thought on “Happy Birthday Simon”