Queen Elizabeth Olympic Park London – The stadium is behind the kids to the right, the aquatic center to the left and the ArcelorMittal Orbit directly behind them. (The tall red sculpture that “is intended to be a permanent lasting legacy of London’s hosting of the 2012 Summer…Games.” They are actually going to convert it to a giant slide in 2016!)
Big cities have such amazing resources.  No beach in London? Okay. We’ll just make one.

We hadn’t been up to Olympic Park in East London so I was kind of excited to see it.  We picked a hot day and made the hour long ride on the DLR from Lewisham (the end of the line) to Stratford (the other end of the line.)  Riding a train from one end to the other end feels kind of like a right of passage in a metropolis.  I remember doing it once with my dad in Washington D.C.

They had hauled in literally tons of sand and set up an all-out summer fair at Olympic Park.  Once again I didn’t want to bring my camera to a sandy place so these photos are all from my cell phone, which died no less than 2,359 times while we were there. (My phone is messed up. I used to be able to just restart it each time it spontaneously died, but then the button broke too.) 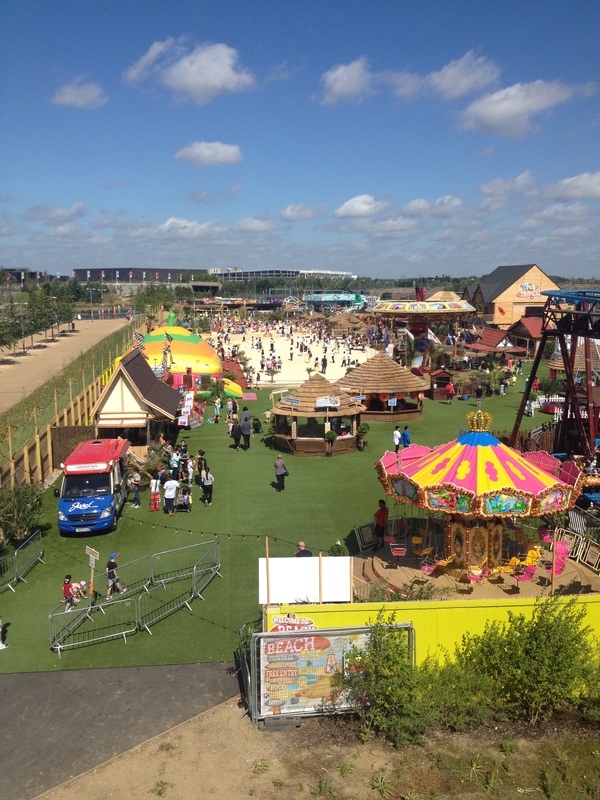 The sand was soooooo soft and there was a little pool for dipping buckets and cooling off.  It got crowded pretty quickly but we had staked out a pretty good space and we stayed for five hours.  It was really fun.  The kids could play in sand for days.

At one point Miriam had dug a little pit and filled it with water and was just sitting in it.  A little girl, probably about two, came over and was splashing in the water with Mim.  No big deal.  The little girl’s mom, and a couple other adult friends were watching her and shouting at her.  I asked what her name was, but thought I was mistaken so I asked them to spell it.

Okay.  So from their blanket a few yards away they shouted at her “Nottie! Don’t do that! Nottie! Be nice! Nottie! That’s not yours.”

Eventually Nottie walked over and plopped her little self right on top of the sand castle I’d built with the kids, and proceeded to just smash it, turret by turret.  I am not fond of disciplining someone else’s children, especially when they are watching, and sure enough they were watching. I looked over and Nottie’s mom and her friends were watching her destroy the castle. I didn’t know what to say, I tried making eye contact with her, to which she shouted at the little girl

“Nottie! I hope you’re being good!”

What?!?  Cameron looked on in horror and I felt completely frozen.  I wish I had been more assertive for my kid’s benefit, but I’m not a confrontational person and I was just speechless.  I apologized to Cam and the other kids later on.  But I really don’t know how to teach my kids that they can stand up for themselves without being angry, rude or unkind when I’m clearly not capable of doing it myself.  Can you say doormat?

Aside from that tragic and infuriating anecdote, we had a really great time at the artificial beach.  Sunny and hot summer days are hard to come by in London and it was fantastic to soak one up.

One thought on “Beach East”