I was really excited for Lori and Sean to come visit.  I’ve mentioned this before, but sharing/showing our life here with our family is really fun for me.  And I knew that Lori would love it, I knew she would love everything, and I was so excited to be there and watch her love it.  There are some things sisters share, and there are things about London that I knew Lori would appreciate the way I do, and I was just aching for that solidarity.

Trafalgar Square
They flew in on a Sunday morning and we didn’t have a car so we couldn’t go pick them up.  I didn’t want to make them tackle public transport with all their luggage and no previous experience so we sent a car for them, and Richard waited at the house for their arrival.  (I was playing the piano at church.)  When Lori walked in after Sacrament meeting I was so excited.  How many times have I said how excited I was?!

After church we did the same thing we do on the first day with all our visitors, a walk to Greenwich Park.  We had a picnic and let the kids play and then it was early bedtime for the jet-lagged that night.

I can’t recall the chronology of the the events thereafter, but we walked as much of the city as we could, ate at as many of our favorite restaurants as we could, attempted a “Dessert Crawl” for Sean’s birthday, and stayed up late having good conversations.  It was just as wonderful having them as I hoped it would be, and I’m sure if they didn’t have kids and jobs and all that other stuff, they could have stayed twice as long and still not done everything we wanted to.  It was also really fun for our kids to have Lori and Sean’s undivided attention, and Lori and Sean were so generous with their attention and affection.

A smattering of photos:

Westminster Abbey (We did a tour, which I had never done before, and it was really interesting.)

Shopping used books on the Southbank.

The Tower of London 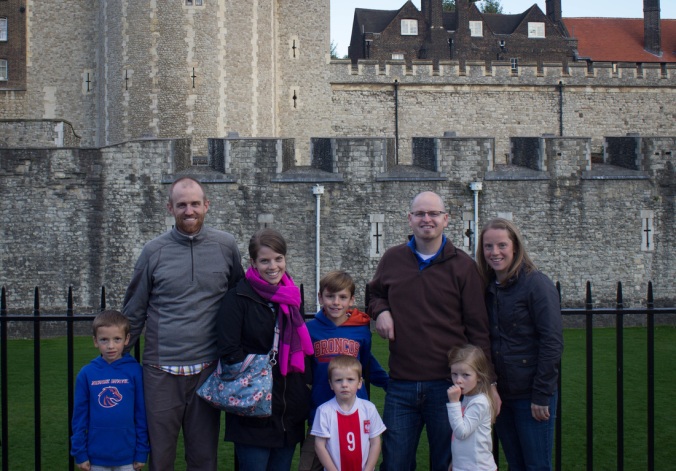 During the week that they were here, the kids were in school so i was able to go into the city with Lori & Sean every day.  That was such a treat!  Then I’d come home in afternoon to pick up the kids and Lori and Sean could continue exploring.  They also spent a day in Oxford and on Saturday we all met up at the Tower of London.  The Tower is a London must-see and so we’ve been there several times, but we did an audio guide this time which is always informative and interesting.

After Lori and Sean left I slipped into quite a lonely funk, for which I had a brief reprieve when Adri and Charlie came, but then I went back into my cave (read: bed) for a few more weeks.  I’m going to attribute it mostly to pregnancy hormones, but it is the reason for my months of hiatus from blogging and other social media.  Hopefully now that I’m feeling myself again I can get caught up!