We are home. After a great deal of driving we made it. I must say that the boys did quite well. There were moments of course, but I don’t think either of the kids got quite as restless as my pregnant self.
I already mentioned the relay race. On Friday I spent the day caring for 4 kids 4 and under and concluded with my mother that we were not cut out to be daycare workers. A great lack of patience on my part, and these kids were my own flesh and blood. 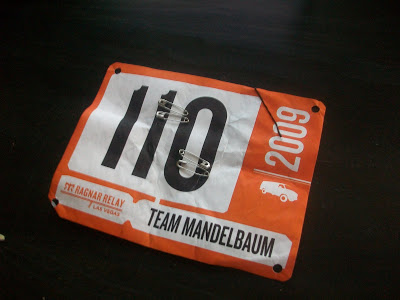 Each team has to provide volunteers and Saturday Richard and I drove to Exchange 31. They were giving away iPods to the most enthusiastic volunteers so we dressed up as pirates and as the runners came in to pass the baton I would cheer
“Thanks for running the Rag-nARRRRRRR!”
So clever, I know. It was my dad’s idea.

We couldn’t wear our spirited pirate shirts because we had to change into these orange shirts for easy identification by the runners. Good thing orange is my favorite color.
I didn’t win an iPod. Richard reassured me that he had no doubt I was the most enthusiastic, but the supervisor in charge of our shift wasn’t ever around to see me in action. Big disappointment. But about every 20th runner would give me a courtesy laugh or even a genuine smile of appreciation.
It was great to see my family’s team come through. But the highlight of the day was when the last runner came through the exchange. She and her team knew they were in last place but they weren’t the least bit deterred. It was a group of women who were beginners to this sort of thing. I was inspired by their motivation and they were appreciative of Richard and I staying two hours past the end of our shift to be there when they came through. It was so worth it.
I am so impressed by people who do hard things. It was hot in Las Vegas that weekend and I know firsthand that runners got sick and exhausted. Three cheers for the racers. Hip hip hooray, hip hip hooray, hip hip hooray!
Oh, and and someone around here will be a pirate for Halloween this year.

2 thoughts on “what happens in Vegas… goes on the blog”