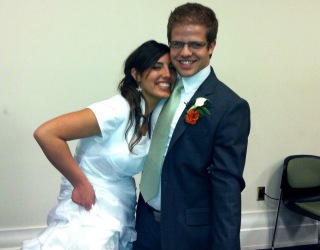 The first weekend in October we drove down Utah to see these two darlings get married.  Richard had been in Pocatello for work so we met up with him on Wednesday in Twin Falls.  We had planned to spend a couple days before the wedding having a family vacation of sorts.  Unfortunately a mysterious fever plagued each of the kids and kept us from pursuing the activities we had planned.  Such is life with four little germ-carriers.

It is always a pleasure to be gathered with my family.  Evan is the youngest of the children in my family, and the last to be married.  Jenessa is everything we look for when we choose our siblings partner.  Okay okay, we didn’t get to choose her, but I am confident we would have, given the chance.

After losing three of my four children in one day, as previously described, we got the heck out of Provo and headed to where the sun always shines in Las Vegas. 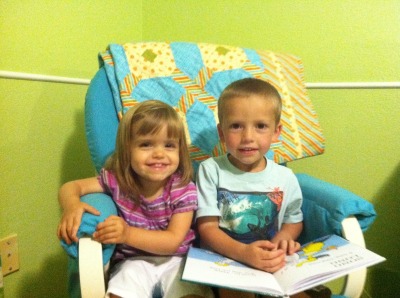 The story about the picture above: The kids were watching a “scary” – not really scary at all Wallace & Grommit- movie and Eli and Thea were not interested.  A while after they left I went upstairs to make sure they weren’t getting into trouble (Eli & Thea? It’s laughable) and this is how I discovered them.  I needn’t have worried.

We had some quality cousin time in Las Vegas, but not-so-quality pictures.  They were taken with my phone.  I forget to take my camera everywhere and think that my phone will suffice but it’s just not so great.
We drove back from Las Vegas with five children (to be explained in the following post).  Richard had long since flown off to another city so my mom accompanied me.
For the chance to look back with not-so-fondness;﻿ during the two weeks surrounding the wedding Richard slept in five different cities.  Boise, Seattle, Pocatello, Provo and Las Vegas.  This does not include two trips to Atlanta and two trips to New Jersey in the month prior.  Whoa.  I’m out of breath just typing it.