Eli had a birthay- shout hooray!

When I pull out the hand-me-down clothes for Simon, enough time has gone by since Eli wore them that I am sometimes overcome with nostalgia, and the realization that time passes so quickly.   Because of the gap in years between Eli and Miriam, I feel like Eli and I had a really great year when he was two. So now that Simon is two, and wearing those cute little clothes, I have been reminiscing about those days with my little buddy Eli.

And now he is six!

Eli is smart.  He is shy.  He is detail-oriented and either focused to a fault or totally distracted.  He is a wandering soul, easily absorbed in the world around him.  He is the kid who literally stops to smell the roses.  He is sensitive.  But hell hath no fury like an angry Eli.  He would do anything for Cameron, or any of his siblings.  He is nurturing and kind.  He will play for hours by himself in his bedroom while the little ones nap.  I love the days when he doesn’t go to kindy because he keeps Mim and Si entertained.

A few months ago as the kids climbed in the van after school Cameron shouted to a boy in his class something about the boy’s “annoying sister” – who happens to be in Eli’s class.  Cameron started wailing and this is how it went

Cameron: Eli hit me for no reason!
Eli: No I didn’t….There was a reason!

The reason turned out to be that it bothered Eli that Cameron had said something rude about his classmate.

On another trip home from school Eli informed us that he was going to go to 1st grade for reading groups.

Richard and I are banking on Eli’s intelligence to compensate for what he lacks in size, to help him have self-confidence.

Eli is myterious, and parenting him feels like a crapshoot.  He can be hard to discpline because it’s hard to find consequences that really reach him.  But a few things we have discovered that he really cares about, that we can use as leverage are nickels, Richard’s nightly ritual of reading Narnia, the Wii, and all things Star Wars.

Because speed is not his strength we thought Chess would be just the kind of game for him.  For his birthday he also got a Star Wars X-Wing model, a couple books, and some Star Wars legos.

Obviously we love our Eli-Pie and love the way he stretches our limits and shifts our paradigms. 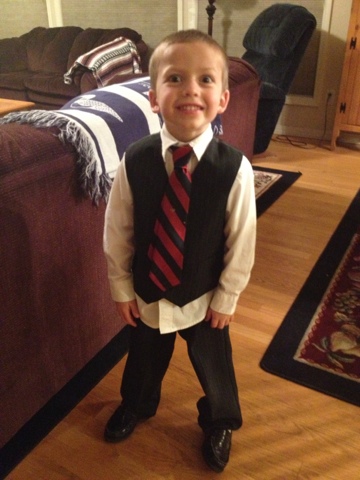