Caerphilly Castle (It was raining and I didn’t realize I had a smudge on my lens.)
While Richard was in the United States for a work conference and a quick trip home to Boise, my parents and I took the kids to Wales for the weekend.  It worked out well because we could only fit seven passengers in our car and without Richard, my parents could avoid renting a car.  I picked up the kids from school on Friday and we drove to Andover, where we picked up my parents who had spent the day at and around Stonehenge.  From there we drove across the Bristol Channel and into Wales!

It was gloomy and rainy and we arrived pretty late so we just went to our hotel in Aberdare and called it a night. 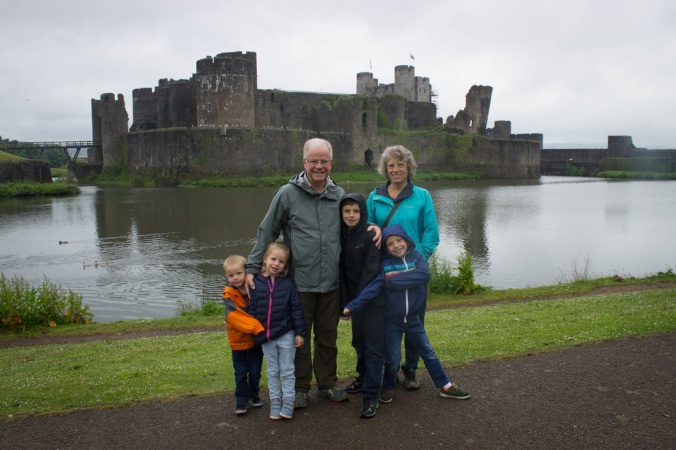 Saturday morning we had a really satisfying British breakfast at the hotel restaurant.  It was an all-you-can-eat type arrangement with pastries, cereal, yogurt and then traditional English hot foods like ham, sausage, eggs and beans.  It’s interesting to me to watch my kid’s preferences unfold.  Cameron will eat anything and everything, clearing bits of ham and sausage from everyone else’s plates.  He also loves fruit.  Eli on the other hand much prefers things like crumpets, cereal, yogurt and croissants.  He is a carb lover and doesn’t care much for meat.  (The jury is still out on Mim and Simon.)

It was an impossible task trying to choose a castle to see.  Wales has more castles per capita than any other country.  Unfortunately some of the most amazing ones are along the north coast, which was a bit too far away.  We settled on Caerphilly Castle, which is the largest castle with the largest grounds. 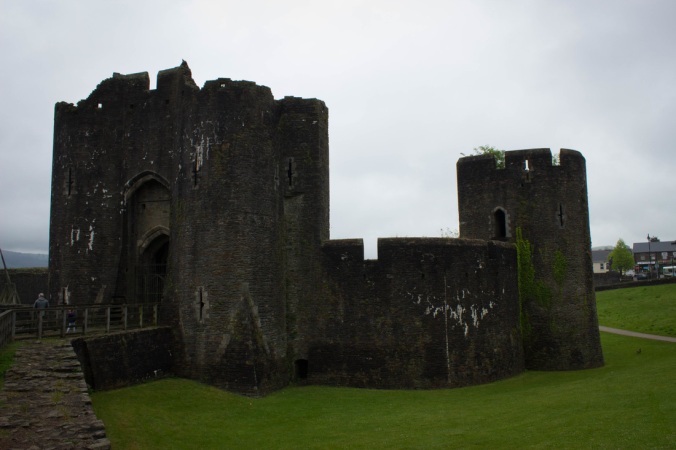 Medieval castles are really cool, but also really simple. Not a lot of ornate carving or intricate stonework. 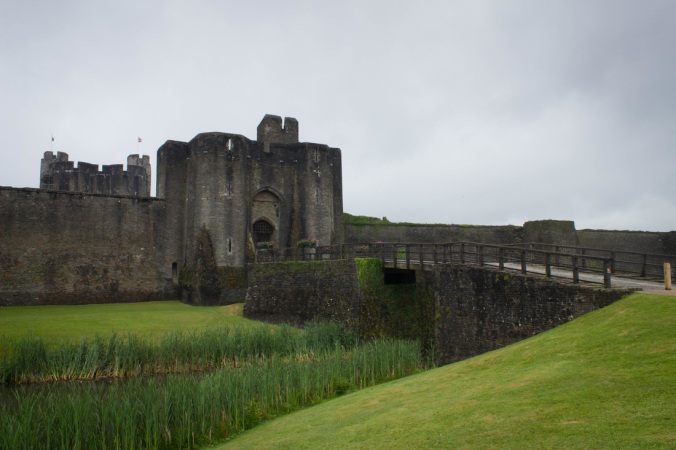 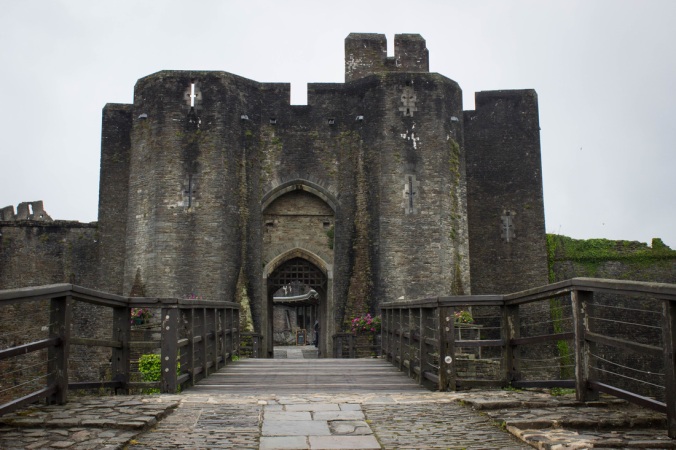 Castle walls are MASSIVE, unbelievably thick.
It rained throughout our visit, not a heavy downpour but a steady drizzle.  The kids didn’t seem to notice, they had been given a scavenger type activity where they looked for clues throughout the castle and grounds.  They really enjoyed it and by the end Cameron and Eli were so into it they wanted to run to each spot.  It was a fun castle because there weren’t many people there and you could explore anywhere and everywhere.  We climbed the tower stairs up to the roof and stuck our heads in all the rooms. 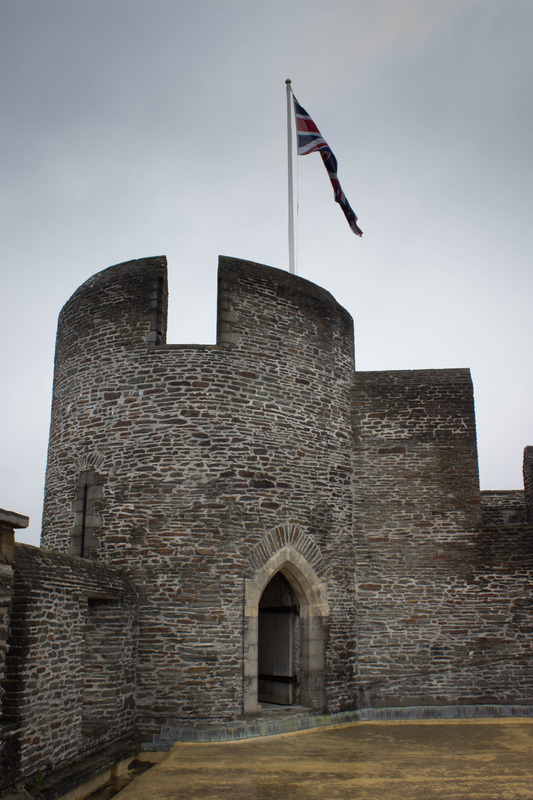 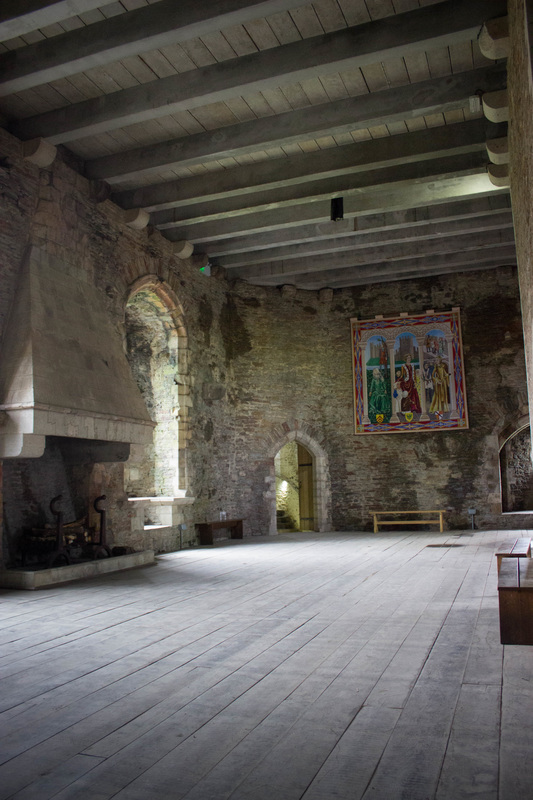 Looking for a clue…

In the early afternoon we left the castle and drove back up north toward The Big Pit Mine.  I knew the kids would like to see a mine and because my dad’s ancestors are from Wales we’re pretty sure mining is a part of our heritage.

When we arrived my parents and the three older kids all got tickets to go down inside the mine. Simon was too small (just a hair shy of 100cm) so he and I stayed up above ground.  Afterward my parents said that was for the best, they had to wear hard hats and it was cold and dark down in the mine.

Simon and I walked through the museum and mine buildings and took photos while we waited for the rest of the gang.  Apparently things weren’t going smoothly and it took them much longer to get down into the mine than originally anticipated, so Simon and I also ate a snack and waiting in the car for a bit.  (Rain.) 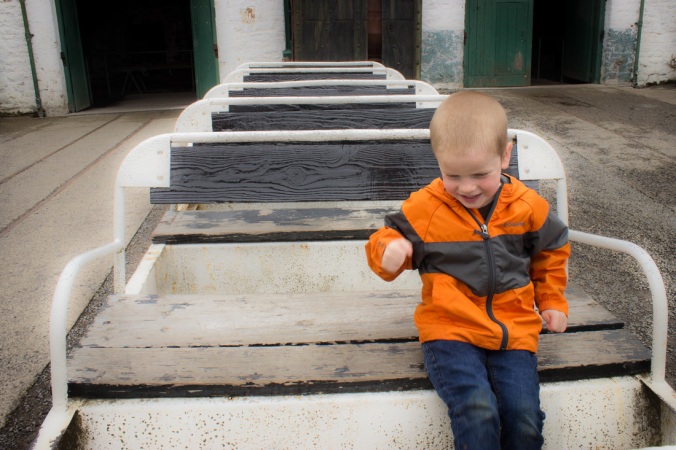 passenger in the mine train. 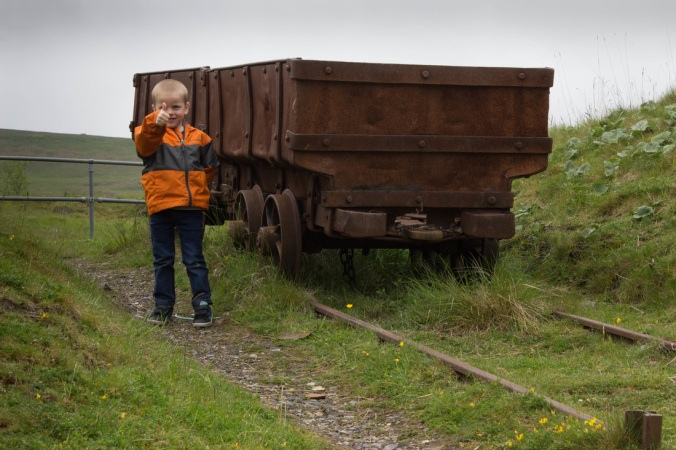 The miners had a clean locker room, and then a dirty one. They would undress from their street clothes in the clean room and walk down the hall to the dirty room, where they would put on their blackened mining clothes.

When the showers were built at the mine, many a housewife sang joyous hallelujahs.

The museum was quite depressing actually. (I really need to find more happy places to visit!) The life of a coal miner began as early as age 9-10, but usually between the age of 12-14, before child labor laws. Some men worked into their 70’s, making for 60 years of 12 hour shifts, six days a week, down inside the dark and cold earth. The boys didn’t get to go to school, and the girls were expected to marry a coal miner, and continue on another generation of fear and worry about the fate of their husbands and sons in the mine. It was obviously dangerous work, tedious, and exhausting. By the end I was pretty much feeling like a horrible person for my ungrateful and reckless use of fossil fuels. 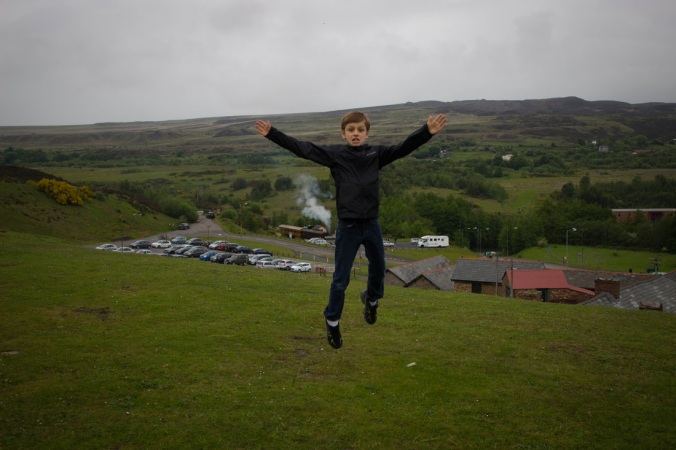 Cameron is totally into the action shots. “Take a picture of me doing THIS Mom!”
We were all ravenous by the time we left the mine so we drove to the nearest town and found a hokey American style diner for dinner.   From there we drove aimlessly through the Brecon Beacon National Park, which was just completely beautiful.  Since I was driving and we didn’t stop much I didn’t take any photos.  But it was really gorgeous.  Picture, rolling hills, pretty green valleys, lots of sheep and hedges and trees.  We made our way up to a little town called Hay-on-Wye, which is known for its outdoor book stores.  (Well, really for its excessive number of book stores, in general.) Unfortunately everything was closed for the day, so we drove down to see the rive Wye, and then drove back home to our hotel. 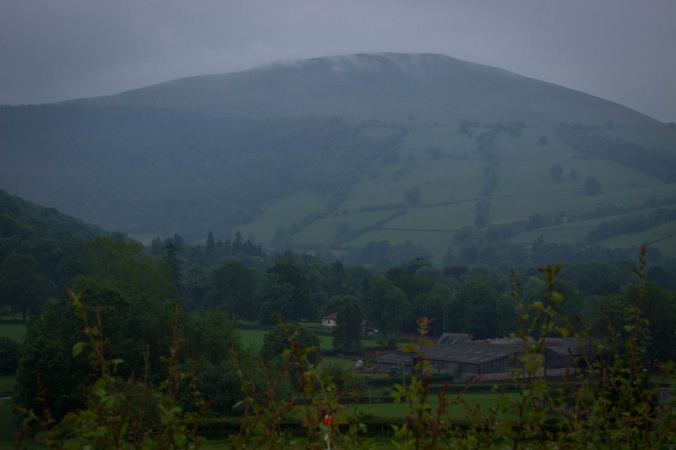